In an opinion piece he wrote for Physics World a few years ago, Whiting School of Engineering Materials Science Professor Michael Falk asserted that minorities in physics are routinely subjected to behavior from colleagues that silence, ostracize, and even erase them. Now Falk, who serves as vice dean for undergraduate education at WSE, is a co-author on the first-ever paper in a peer-reviewed journal examining the experiences of LGBTQ+ physicists.

The study, published later this month in Physical Review Physics Education Research, found that LGBTQ+ participants reported experiencing—and also witnessing—behaviors ranging from shunning and homophobia to harassment at what the authors call "alarmingly high rates." Falk and the research team also learned that LGBTQ+ people who are from marginalized gender, racial, and ethnic groups faced even more challenges.

The paper, Falk says, represented both an opportunity for research and a responsibility to the physics community.

"LGBT+ people in the STEM fields know that discrimination exists and climate issues persist, but it affects each of us differently," Falk says. "The tendency in the culture at large is to actively ignore or closet LGBT+ issues. That makes it very hard for LGBT+ people as a community to really understand the extent to which our schools, universities, and workplaces are welcoming or hostile. And without a clear understanding of the state of things, it is hard to know what needs to be done to make the situation better." 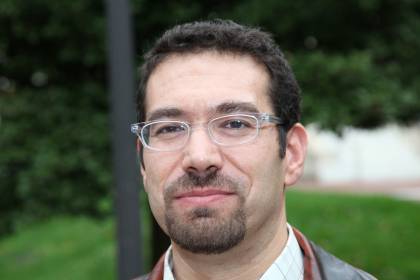 Falk has worked for more than a decade to bring to light issues of gender- and sexuality-based discrimination in STEM fields through his research, conference presentations, and activism. For more insights into the issue, the Hub spoke with Falk about the study's findings and why they are so important.

How and why did you get involved in this work?

Sometime around 2010, I joined a group called LGBT+ Physicists started by Elena Long, now a faculty member at the University of New Hampshire. We were working to support LGBT+ people in physics by organizing gatherings at conferences of the American Physical Society and engaging in various forms of activism around LGBT+ inclusion. Through this work, we partnered with other diversity groups in physics to run a session of talks and discussion at the 2012 APS March Meeting. This brought LGBT climate issues to the attention of APS leadership, who then asked me to chair an ad-hoc committee on LGBT Climate in Physics. That committee included the co-authors of this paper. Led by the efforts of Ramon Barthelemy, now faculty at University of Utah, we completed the survey and came together to analyze the data and write the report.

We don't elicit the best science, engineering, art or anything for that matter from our collective efforts if we are excluding people from contributing to these endeavors based on arbitrary prejudices. Exclusionary and prejudicial behaviors are not good for society and are not good for physics, engineering, or our other STEM professions. We need every human being with a will to contribute to be able to bring their "A game" to the work. It is hard to do that if you are facing active hostility or a basic lack of respect.

The study team used something called "snowball sampling," a recruitment technique in which participants in a study are asked to identify other potential subjects. Why was this approach used?

Unlike surveys of other groups, there exists no comprehensive, or even partial, census of LGBT+ physicists. Questions about sexual orientation and gender identity are rarely asked by our professional societies, employers, or schools. Snowball sampling was a way to tap into our naturally occurring social and professional networks to disseminate the survey as widely as possible within the community of LGBT+ physicists. We, each of us, struggle mightily to find a community of kindred spirits. This survey benefitted from all of that invisible effort.

"We don't elicit the best science, engineering, art or anything for that matter from our collective efforts if we are excluding people from contributing to these endeavors based on arbitrary prejudices."
Michael Falk
Professor, Materials science and engineering

As a gay man and a physicist, you likely have experienced similar behavior firsthand. Were there any results of the study you found surprising?

There were a couple of findings that I found surprising, but that seem less so in retrospect. One is how gendered the climate issues are for LGBT+ people in physics. Bisexual and lesbian women face significantly more hostility than gay and bisexual men, and gender non-conforming people report the least welcoming environments. Trans people face the most discrimination. The second surprising finding was that observing exclusionary behavior, even more so than experiencing such exclusion, correlated with leaving the profession. It was sobering to realize that the public performance of exclusion was so impactful not just on the target, but on the whole community. That is a powerful insight, and a deeper understanding of how that plays out could benefit our inclusion efforts.

Do you think the study sheds light on the experiences of LGBT+ scientists/engineers in general, or is it specific in some way to physicists?

While each community is necessarily different, I would not hesitate to guess that similar dynamics are in play in a variety of STEM disciplines. At the same time there are different strongly held values in each community. It has been observed by Carl Wieman, a Nobel laureate who works in STEM educational equity, that the physics community tends to fetishize "genius" and "innate talent" in ways that may serve to reinforce assumptions and to reward privilege. It seems to me that engineering has culture that strongly values professionalism and teamwork. These can be deployed to exclude people who don't conform or immediately mesh with the team. Conversely, they can provide the impetus for inclusive practices. But this will only be the case insofar as we train our engineering students and instill in our colleagues an expectation that it is the height of professionalism to create teams that are open to diversity where people come together from many walks of life to serve the common purpose.

Are the study's conclusions a "call to action," and if so, what kind of action?

The call to action coupled to the paper was really set forth in our 2016 "LGBT Climate in Physics Report" that was published by the APS. Some of the recommendations in that report have already been acted on. One that was very interesting was the piloting of mechanisms in APS journals where trans people undergoing name changes could have that reflected retroactively in the literature. That is very powerful and something we could only consider with the ubiquity of online academic literature. Also the APS has adopted a Code of Conduct for all meetings and established policies and procedures for addressing any reports of harassment at its meetings.

I know that Ramon Barthelemy, assistant professor at the University of Utah, and Timothy Atherton, associate professor at Tufts University (both members of the study team) are continuing to do research in this area. I would be fascinated to do some action research related to evaluating our educational practices. I would love to measure the impact of early educational interventions in the first years of college where students actively learn how to interact productively and inclusively on engineering teams. I think this kind of learning may foster the skills necessary for students of all backgrounds to benefit from open study groups and to integrate into professional teams in their workplaces long after they graduate.