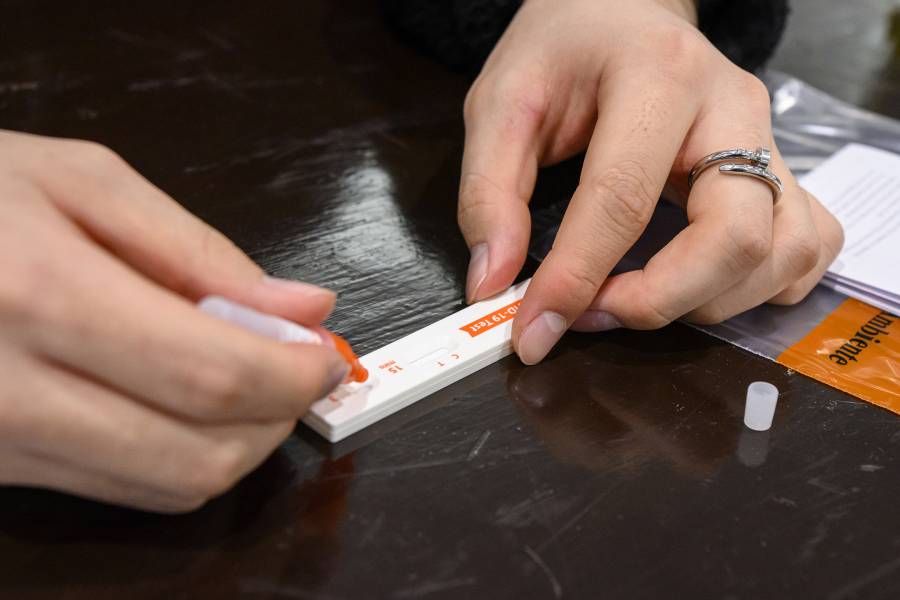 The study researchers feel these results suggest that rapid antigen testing can be confidently used to screen for children and adolescents who are infected but not showing symptoms. Such screening, they believe, could help keep classrooms safer when students attend in person.

The findings were first posted online earlier this month on the preprint website MedRxiv, where scientists and clinicians have been sharing urgent COVID-19 research before peer-reviewed journal publication.

"Quick, accurate and accessible diagnostic testing for SARS-CoV-2 in pediatric populations is critical to keeping children in classrooms, especially given the contagiousness of the newer virus variants, including delta and omicron," says study senior author Zishan Siddiqui, assistant professor of medicine at the Johns Hopkins University School of Medicine. "Our research—conducted when the delta variant predominated—provides a timelier measure of the rapid antigen test's accuracy in children than studies done before the more transmissible variants became prevalent."

However, Siddiqui cautions that a negative rapid antigen test in children and adolescents should not be taken as a license to abandon other COVID-19 safety measures such as physical distancing, masking, frequent hand-washing and maintaining good ventilation.

"The rapid test should be considered another important layer of safety in keeping our children safer," he says. "Based on our study findings—which did show a 30% false positive rate for the rapid test—a PCR test, when available, is recommended to confirm a positive rapid test result."

The research team analyzed results from just over 1,000 patients ages 17 and younger who were seen at the Baltimore Convention Center Field Hospital testing site during a seven-month period last year. The tests used in the study were the BinaxNOW rapid antigen test manufactured by Abbott Laboratories.

The study also determined, Siddiqui says, that the negative predictive value, or NPV—the probability that a person who tests negative has not been infected with SARS-CoV-2, as a PCR would show—was high for both symptomatic (99.2%) and asymptomatic (99.7%) young people.

These are significant findings, Siddiqui explains, because the rapid test offers advantages over the PCR test, including time savings (both during sampling and processing), cost savings, and, most importantly, ease of distribution and application—which can be done basically anywhere, including schools. This can help overcome COVID-19 testing disparities for children and adolescents in medically underserved communities.

"Our findings of near 100% NPVs for both symptomatic and asymptomatic children and adolescents should pave the way for parents and school administrators to place more trust in the rapid antigen test results," says study co-lead author Mary Jane Vaeth, a clinical assistant at the field hospital.

A cost savings approach to testing

The first step for both the PCR and rapid antigen tests is obtaining a patient sample, either from a nasal swab or a bit of saliva. The difference lies in how the sample is processed and analyzed. A PCR test takes a tiny bit of SARS-CoV-2 genetic material from a sample and reproduces it thousands of times so it can be more easily detected. A rapid antigen test uses laboratory-produced antibodies to seek out and latch onto proteins on the surface of SARS-CoV-2 particles in the sample.

The PCR test requires a skilled laboratory technician, special equipment and up to an hour or more to process. Often, results are not available until one or two days after the test. Additionally, testing on a massive scale can only be conducted at a large, centralized facility, such as a hospital laboratory.

On the other hand, rapid antigen testing uses a pre-made kit with a reagent that contains antibodies specific for SARS-CoV-2. The test can be conducted by anyone after brief training, can be administered anywhere and provides results in approximately 15 minutes.

In an earlier study at the field hospital, Siddiqui and colleagues determined that while the PCR test may be better from a clinical perspective—it's basically 100% accurate at detecting SARS-CoV-2—the rapid antigen test appears to be better from a public health standpoint because of its ease of use, and because it proved to have sufficient accuracy, specificity and reliability for detecting the virus in a high-volume setting.

In a future study, the researchers plan to assess the accuracy of rapid antigen tests marketed for home use.