Ludwig Brand, beloved member of the Department of Biology, dies at 90

Ludwig "Lenny" Brand, a 48-year member of the Department of Biology, professor emeritus, and academy professor, died Jan. 5. He had just turned 90.

Brand's research focus was the dynamic structure of proteins, biological membranes, and nucleic acids and relating their dynamics to function. Using light as a probe in conjunction with molecular dynamics simulations, he examined ultra-fast dynamic interactions in proteins using nanosecond time-resolved fluorescence spectroscopy, an approach for which his lab was one of the early pioneers. Brand and his team were among the first to use time-correlated single photon counting, as well as introducing and developing the concepts of decay-associated spectra and time-resolved emission spectra. 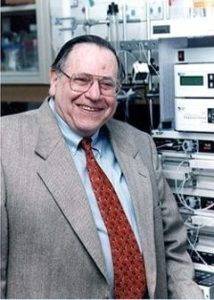 A passionate teacher with a roaring laugh, Brand made quick fans of his students, colleagues say. He was so dedicated to the calling that even when he needed crutches or a walker following surgery, he still came to class. Known for his kindness, generosity, and humility, he had a tremendous impact on his departmental home.

"As is often the case with colleagues who have been with us for so long, we may not realize how much our sense of community is built on their legacy. This is certainly the case with Lenny, who has always been there for others," said Vincent Hilser, the department's chair.

Born in Vienna, Austria, Brand graduated from Boston Public Latin School in 1951, and earned a bachelor's degree from Harvard in 1955 and a PhD from Indiana University in 1960, both in chemistry. He served as research associate at the Weizmann Institute of Science in Rehovot, Israel, from 1961 to 1963, and arrived at Johns Hopkins' biology department and McCollum-Pratt Institute in 1964, where he remained until his retirement in 2012.

"Lenny's passing left a big hole in me," said Yuan Chuan Lee, academy professor and research professor in the Department of Biology. "He has been very kind to me since the first day of my arrival at Hopkins. All I know about FRET (fluorescence resonance energy transfer), I learned from Lenny. Many a time, when I needed a more sophisticated measurement of fluorescence, Lenny is the one who accommodated me to use his high-powered machine, and interpret the data for me." Lee and Brand shared several research grants and sometimes published together, and served together on the executive editorial board of Analytical Biochemistry, founded decades ago by Johns Hopkins professor Alvin Nason. "I will sorely miss Lenny," Lee said.

Brand was a member of the American Chemical Society and the American Society of Biochemistry and Molecular Biology, and he was a fellow of the Biophysical Society, which awarded him the Jablonski Award in 1998 and the Gregorio Weber Award in 2015. He served on the editorial boards of several journals, including Analytical Biochemistry, where he was executive editor from 1995 to 2000; Biophysics of Structure and Mechanism; Protein Chemistry; and Journal of Fluorescence Spectroscopy.

In addition to being a pioneering scientist, Brand was dedicated to training and providing opportunities for the next generation of scientists, and he garnered praise from the many world-class scientists that worked with him. Dmitri Toptygin, an associate research scientist whom Brand brought to Hopkins from the USSR in 1990, noted, "Lenny was an excellent supervisor: He deeply cared about people who worked with him, encouraged us to do what was most interesting, and never micromanaged our work. I deeply appreciate everything Lenny did for me and my family."

Correction: The date of Ludwig Brand's death was misstated in an earlier version of this article. The Hub regrets the error.