Recipients of the annual MLK Jr. Community Service Awards were recognized during a virtual ceremony Friday

In his opening remarks, Johns Hopkins University President Ron Daniels made reference to King's final book, Where Do We Go from Here: Chaos or Community? In it, King recalls a transatlantic trip he took in 1956 and was struck by the fact that the flight took nine hours in one direction and 12 hours in the other. The winds, the pilot explained, were behind the aircraft on the first leg and against it on the second.

"Ever the pastor and philosopher, King saw in this a powerful symbol of social change," Daniels said. "Having recently led the Montgomery Bus Boycott, he found himself at the helm of a national civil rights movement. But he knew the road ahead would be paved with great resistance. Yet he had faith that in headwinds or tailwinds, humanity could still reach its moral and social destinations, so long as we are, in his own words, 'sustained by our engines of courage,' the determined individuals with the fortitude to cultivate and carry the work of change forward not just day after day, but year after year.

"Today's honorees are perfect embodiments of this idea. You are 'engines of courage' here at Hopkins and in your communities. Whether you were providing PPE to essential workers, distributing basic necessities to Baltimoreans in need, or connecting your neighbors to vital services, you met these urgent needs in spite of the great headwinds of a historic pandemic and an ever more polarized country."

Additionally, Denis Antoine, assistant professor of psychiatry and behavioral sciences at the School of Medicine, was recognized with the Levi Watkins Jr. Ideals Award. Watkins, who died in 2015, was the first Black chief resident of cardiac surgery at the Johns Hopkins Hospital and in 1980 made medical history by implanting the first automatic heart defibrillator in a patient. He launched the MLK commemoration event in 1982 to honor the man who was his pastor and mentor while he grew up in segregated Montgomery, Alabama.

From a Hopkins Medicine profile of Antoine and his work:

Denis Antoine is deeply dedicated to helping people with substance use disorder and psychiatric conditions, including those in Baltimore's underserved population. He started his career at Johns Hopkins Bayview Medical Center by caring for patients with co-occurring substance use disorder and mental illness, as well as people seeking outpatient opioid use disorder treatment. In 2012, he brought his expertise to the Helping Up Mission, where he helped launch the Cornerstone program and became its medical director. In 2014, he was named director of the program, which provides services to people who are homeless and have a substance use disorder. He expanded Cornerstone to include mental health services, and incorporated behavioral telehealth care during the COVID-19 pandemic.

At Bayview, Antoine directs a comprehensive addiction treatment center for patients with substance use disorder, including those with co-occurring psychiatric illnesses, and is a core faculty member of the Behavioral Pharmacology Research Unit and the Johns Hopkins Center for Health Equity. He also directs the Center for Addiction and Pregnancy, which helps mothers and infants deal with the physical, emotional and social problems caused by addiction. Additionally, Antoine conducts outreach to religious congregations, including 12 in the Baltimore area, in his role as co-director of the Congregational Depression Awareness Program, which disseminates information about depression to people directly and indirectly impacted by it.

About his work with Cornerstone, Antoine says, "Seeing clients come from the point of having so much difficulty with stopping a use disorder to seeing them celebrating getting their GEDs, getting their first job, is a rewarding thing and something I'm proud to be a part of."

Earlier in the week, Hopkins Medicine welcomed Pulitzer Prize–winning author Isabel Wilkerson for the MLK Commemoration keynote, which was delivered virtually on Tuesday. Wilkerson discussed social hierarchy in the United States, tracing its history from the nation's infancy to its most recent and enduring manifestations in American life. 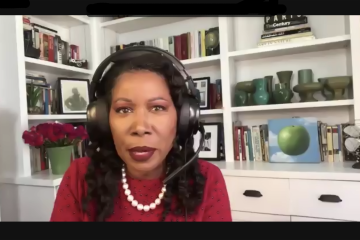 Published Jan 12, 2022
The Pulitzer Prize-winning author visited Johns Hopkins for a virtual discussion of social hierarchies in the United States