Glioblastoma is widely considered the most aggressive brain cancer. Even with treatment, patient survival rates are low, with most living an average of 15-18 months after diagnosis. Because of the highly diverse characteristics glioblastoma tumors exhibit and their location in the body—in the sensitive and well-protected brain—treating this disease is challenging.

A new DNA nanotechnology-based drug delivery system being created by a team led by a Johns Hopkins engineer may improve treatments and survival rates by better targeting the primary tumor.

"One of the biggest hurdles to delivering treatments via the bloodstream is crossing the blood brain barrier, which not only protects the brain from toxins in the bloodstream, but can also block out large molecules like therapeutics. My team is using DNA nanotechnology to create a single-stranded DNA (ssDNA) nanotube that can cross the BBB, targeting brain tumors," said Efie Kokkoli, a professor of chemical and biomolecular engineering at the Whiting School of Engineering and a core member at the Institute for NanoBioTechnology.

Their findings appear in Science Advances.

"So not only is the nanotube a package, but it is also the courier, carrying the medication to its target," Kokkoli said. 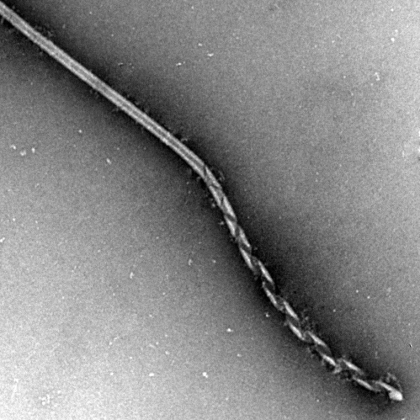 Kokkoli, with colleagues at the University of Minnesota and Johns Hopkins, used mouse models to test the ssDNA nanotubes' accuracy in targeting glioblastoma. They injected nanotubes into both sides of mice's brain hemispheres: one side was healthy and one was laden with glioblastoma tumors. The researchers observed that the tumors held onto the nanotubes, but they were absent from the brain's healthy side, providing evidence that there is little chance that the new therapeutics would harm healthy cells. The team also injected nanotubes into a vein on the mice's tails and noticed the same results, indicating the nanotubes successfully traveled through the rodents' body and crossed the BBB.

Complete surgical removal of glioblastoma tumors is not possible as traces of glioblastoma cells can be left behind, causing recurrence. That's why it is standard to include chemotherapy treatments after surgery. As part of their study, Kokkoli's team evaluated the nanotubes as a delivery vehicle for doxorubicin, a chemotherapy drug. Again using mouse models, they injected glioblastoma cells on one side of the brain to simulate remaining residual tumor cells following tumor resection. Following the injection, a tiny infusion pump was implanted to deliver different treatments in the test subjects' brains. Some mice received empty nanotubes, while others received doxorubicin freely in the brain or via the DNA nanotubes.

The treatments stopped after two weeks, and the mice were monitored for about a month and a half. The mice that received doxorubicin via the nanotubes showed an increase in survival: half were still alive at the end of the study. More importantly, the mice that received free doxorubicin showed signs of toxicity in their liver and spleens. In contrast, there were no significant findings in spleen and liver tissues of mice treated with empty nanotubes and those that delivered doxorubicin.

"Our results showed that ssDNA nanotubes are a promising tool to target glioblastoma tumors and deliver therapeutics to brain tumors," Kokkoli said.