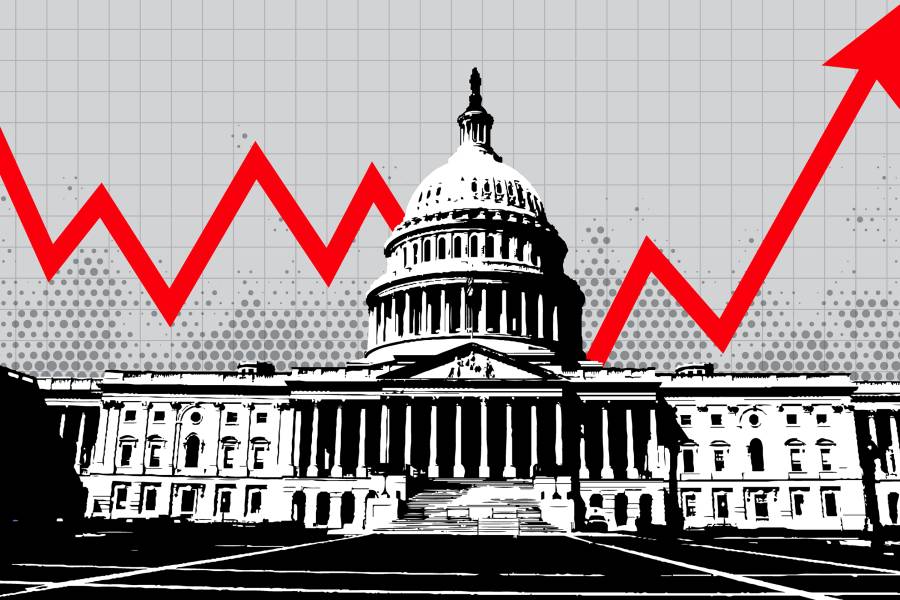 As the Dec. 3 deadline to raise the debt ceiling approaches, Kathleen Day discusses the history of the debt limit and why it remains a critical economic and political tool

It's been labeled a game of "debt roulette," but the routine congressional clash over extending the federal debt limit might also be described as a game of chicken. The two major political parties set themselves against each other and hurtle toward the deadline while the rest of the country can only sweat it out.

In the latest iteration of this long-running drama—the current deadline for settling the matter is Dec. 3—Democrats aim to lift the debt ceiling so as to cover the costs of spending already approved by Congress. Republicans say they'll play no part in raising the limit, looking instead to force Congress's ruling party to resolve the budget problem by making cuts in the Democratic spending plan.

Kathleen Day, a business journalist and author and a lecturer on the full-time faculty of the Johns Hopkins Carey Business School, has made a specialty of studying and writing about the nation's financial workings, particularly in times of crisis. Day offers her insights into the debt limit issue and its history, addressing topics that include the origins of the limit, the impact on the economy if the U.S. were ever to default on its debt, and the legacies of Alexander Hamilton and Thomas Jefferson within the context of this issue.

The U.S. government has carried debt since the Revolutionary War, but the U.S. debt limit is a creation of the 20th century. How and why did it come about?

Until World War I, Congress approved not only spending but essentially any instance of the U.S. Treasury's issuing debt to finance that spending. In 1917, Congress changed that by lifting the requirement that it approve every bond Treasury issued to fund the war. But it did set limits on the amount Treasury could issue, and in that way retained control over the process. Then, at the end of the 1930s, Congress lifted the requirements that it had to approve Treasury's issuance of debt to fund other spending that Congress had already approved. It again set a limit—a ceiling—on overall debt to maintain control. That's the system now in place.

"U.S. debt securities, despite all our bickering, remain the benchmark of financial security the world over. If we were to default, that underpinning would be lost, and markets would plunge and economies here and abroad would suffer."
Kathleen Day
Lecturer, Carey Business School

Key to remember is that the debt ceiling is a cap on debt to be issued for spending that Congress already has approved, including, for example, money for Social Security and Medicare payments and Veteran retirement funds. Approving an increase in the debt ceiling does not mean approving new spending. It merely enables the Treasury Secretary of the United States to fund debts that Congress has already approved and incurred.

If the debt limit were not raised and the government were to default on its financial obligations, what would be the impact on the U.S. economy?

It would be a disaster, as U.S. debt securities, despite all our bickering, remain the benchmark of financial security the world over. If we were to default, that underpinning would be lost, and markets would plunge and economies here and abroad would suffer. The cost to taxpayers to fund future expenditures would skyrocket. Unemployment would jump: Moody's, for example, recently estimated that 6 million jobs would be lost, nearly doubling the current unemployment rate of 5.2% and erasing $15 trillion in household wealth, if default occurred.

Retirement checks for veterans and Social Security recipients would be interrupted. The cost to borrow for homes, cars, and credit cards would explode. In short, default would cause mayhem—so much mayhem, in fact, that I think elected officials would blink before they would let it happen.

Still, Congress's let's-take-us-to-the-brink-before-we-blink tactics have potential costs. In 2011, during the Great Recession, just after Republicans and Democrats reached a debt ceiling agreement, [the credit rating agency] Standard & Poor's nonetheless downgraded the U.S. credit rating, citing the "political brinkmanship" as an element of risk that could not be ignored. That downgrade provides a window into how such a move comes at taxpayer expense. For taxpayers, political uncertainty can raise the cost of borrowing as investors demand higher returns to compensate for the higher risk of default uncertainty.

Another key ratings agency, Fitch, in a recent report, cited the bitter political division that followed the 2020 presidential election as a troubling circumstance that could lead it to downgrade America's credit rating, and thus raise borrowing costs for taxpayers, with or without a debt ceiling. In other words, the stability of America's democratic institutions has an even greater impact than the debt ceiling on the country's ability to borrow and maintain its good name in markets.

In a recent interview with Marketplace, you referred to the "political football-ness" of debt. What did you mean?

With or without a debt ceiling, politicians of both major parties will find a way to make funding American's debt political. For example, the Republican tax cuts of 2017 raised the deficit—the amount by which expenditures exceed taxes and other sources of funding and thus create the need for the government to borrow—by an estimated $1 trillion over the next decade, despite promises that the cuts would pay for themselves. The deficit grew by nearly $8 trillion under Donald Trump, even before COVID-19 hit. Republicans then used the increase in the deficit that their tax cuts helped create to call for cuts in spending, specifically in Social Security and Medicare.

"The stability of America's democratic institutions has an even greater impact than the debt ceiling on the country's ability to borrow and maintain its good name in markets."

They didn't expect the pandemic to come along, however, and with it a recession. When COVID-19 hit and sparked a downturn, it scuttled talk of cutting Social Security and Medicare and, to the contrary, required massive additional government spending to keep the economy afloat. The total deficit was $2.8 trillion in fiscal 2021, its second-highest total ever and largely driven by spending to counteract the economic drag of COVID-19. That pushed up the already-big national debt even more. It's now bigger than ever—over $28 trillion—and the debt ceiling has been hit.

The current Treasury Secretary, Janet Yellen, has called the debt limit concept "destructive" and has said she would support legislation abolishing it. Do you agree that the debt limit should be abolished, or does it serve a useful purpose?

Personally, I think the debt limit, though routinely misused by both major parties, is as good as anything to remind the public of the enormous public debt we carry. Any substitute, including lifting of the ceiling permanently, would not do away with the political shenanigans and grandstanding surrounding the national debt. Keeping a ceiling helps remind everyone of the enormous burden our debt is, to the economy now and to future generations.

According to the Congressional Research Service, foreign governments (led by Japan, China, and the United Kingdom) and foreign private interests held 33% of the publicly held U.S. debt as of December 2020, and the interest paid on the debt to foreigners in 2020 was $137 billion. Can you provide some context for these numbers? Is it largely a beneficial arrangement for the U.S. in financial terms, or is it more like a ticking time bomb?

Both. Having many groups willing to extend you credit lowers the cost of borrowing. But being indebted can be a ticking time-bomb. It depends, as with most things in life, on degree. If you borrow to buy a house and do so at prevailing market rates and for an amount you can afford, homeownership can be beneficial, especially, for example, if you have paid off your mortgage and fully own your house when you retire. But if you buy a much bigger home than you can afford, all your money goes to the mortgage and interest on that mortgage, taking money from the economy that could be spent more productively on other goods and services. Borrowing can be good if the benefits outweigh its costs. Too much borrowing is corrosive.

Here's a real-life example of the national security risks that being heavily indebted can cause. During the Great Recession of 2007 to 2012, Russia and China held about $500 billion in U.S. mortgage debt, or about 10% of it. When the mortgage market crashed in 2007, Russia approached the Chinese to try to coordinate a mass sell-off of that debt to flood the market and plunge U.S. markets even deeper into chaos. China declined, but the threat underscored the risk of owing so much money. Of course, rational creditors don't want those who owe them money to fail. China was rational.

How much debt held by foreigners is the right amount? There's not a consensus, but many economists seem to agree that the overall debt is the problem, not necessarily who holds it. Today's 33% of foreign ownership is down from 42% five years ago, but mostly because total debt has grown faster than foreign purchases of that debt.

Alexander Hamilton called federal debt "a national blessing" that would help the nation and its economy grow. About four decades later, Andrew Jackson referred to debt as "a national curse" that primarily benefited the wealthy. From the perspective of 2021, whose evaluation would you say has proved closer to the mark?

Jefferson understood that debt, like banks, could be useful but also destructive. He felt that the risks too often outweighed the benefits. Hamilton also understood the potentially destructive power of debt and banks, but he understood that the ability to borrow—and the need to maintain a good credit rating to do so—was imperative for economic growth. Imagine if every company had to save up money before buying equipment or investing in research for new products and services. That would severely hobble economic activity.

Too much debt, however, as we're seeing in the high-risk corporate debt arena now, can be corrosive and counter-productive. Just like an individual, a company burdened with too much debt is spending too much money on interest rather than on investments for its future. The benefits of debt must outweigh the inherent potential risk of owing someone money. Borrowing to build a factory that makes widgets that people want to buy helps employ people and helps the economy grow, hopefully long after the debt of building the facility is repaid. But companies that are overextended, just like overly indebted individuals or governments, become buried in debt.