Maurice Bessman, longtime faculty member in the Department of Biology, dies at 93

Maurice "Moishe" Bessman, renowned biochemical enzymologist and 50-year member of the Department of Biology in the Krieger School of Arts and Sciences, died Nov. 12. He was 93. 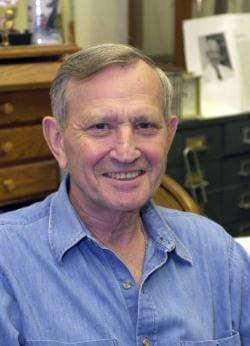 Admired for his intellect, independence, teaching and mentoring, and overall class, Bessman focused his research on biochemistry, enzymology, synthesis of nucleic acid derivatives, and proteomics. Though he retired in 2008 as research professor and professor emeritus, he continued his research until this year, studying the Nudix hydrolase family of enzymes—a large, widely distributed class of proteins that his team discovered had a common signature sequence. The team systematically cloned members of the enzyme family in an effort to identify their function.

"In addition to being a world-class scientist, every encounter with Maurice, whether in the halls of biology or around campus, was positive and uplifting. He was a great person," said Vincent Hilser, professor and chair of the Department of Biology.

In 2016, alumnus Mike Engler, who earned a bachelor's degree in natural sciences in 1973 and a PhD in biology in 1978, established the Maurice Bessman Lacrosse Scholarship in honor of Bessman, a devoted fan of Hopkins lacrosse. "A scholarship gives these young men a chance to attend a world-class university. And with the team's high graduation rate, it gives them a great chance to graduate from one. To have this in my name, I'm very proud," Bessman said at the time.

"At Hopkins, Maurice Bessman, known affectionately by his students of all ages as 'boss,' created a research program, raised a family, taught younger scientists, and supported Blue Jays lacrosse for over half a century," said Edward Hedgecock, professor in the Department of Biology. "My own children knew that every Friday afternoon meant popcorn at the Bessman happy hour."

Born in Newark, New Jersey, Bessman earned a bachelor's degree at Harvard in 1949, and a master's degree and a doctorate at Tufts University in 1952 and 1955, respectively. He served as a research assistant and then biochemist at the Boston Dispensary from 1951 to 1955, as Charlton Research Fellow in the Department of Biochemistry at Tufts from 1952 to 1955, and as postdoctoral fellow at Washington University School of Medicine from 1956 to 1958. Bessman arrived at Hopkins as assistant professor in 1958 and was named professor in 1962.