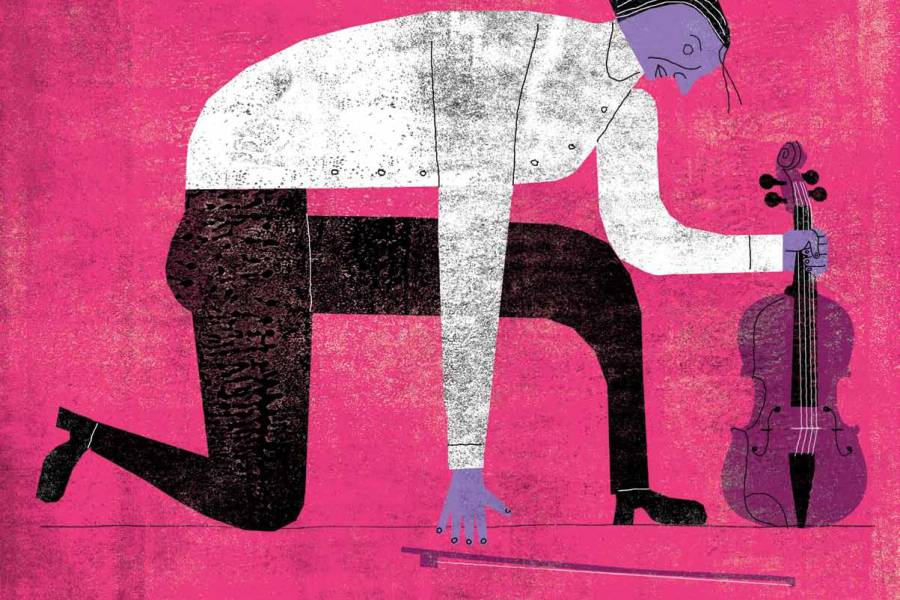 For Hopkins Symphony Orchestra, a long-awaited return to the stage

On Saturday, Oct. 16, the ensemble will perform its first in-person concert in more than a year and a half, since the onset of the COVID-19 pandemic

For many in the performing arts, the effects of the 2020 COVID shutdown were both personal and professional. Musicians, dancers, and theater companies the world over found both their livelihood and their primary mode of expression put on an indefinite pause. While online platforms such as Zoom and Instagram Live allowed for an alternate form of connection, an essential exchange between performer and audience was lost.

"Our musicians have been itching to play a concert for people," says Rafaela Dreisin, who became general manager of the Hopkins Symphony Orchestra in July and brings more than nine years' experience in audience development with the Baltimore Symphony Orchestra. "Even for people who've been performing virtual concerts, it's just different—you put that energy out there, but when you perform in person for people you also get energy back."

"Our musicians have been itching to play a concert for people. Even for people who've been performing virtual concerts, it's just different—you put that energy out there, but when you perform in person for people you also get energy back."
Rafaela Dreisin
General manager, Hopkins Symphony Orchestra

The HSO is currently preparing for its Oct. 16 Family Weekend concert, which will be the ensemble's first since the start of the pandemic in March 2020. The orchestra had just returned to its home in Shriver Hall after a two-year absence because of renovations when it was forced to cancel the final show of its 2019–2020 performance season.

Online watch parties of archived performances in the spring of 2020 provided some interaction between the orchestra and its audience, and an extremely limited number of players were able to meet up in the spring of 2021 to help one another stay sharp.

"There were literally nine people allowed into Shriver at one time, and we just got to rehearse for an hour on Monday nights," says Kevin Li, a 2021 Hopkins graduate who is currently pursuing a master's degree in Applied Mathematics and Statistics. "But despite the more limited time and capacity, it was really enjoyable, and I felt really lucky to be a part of it. We got to know each other so much more, and it fulfilled the need to make music with other people for the first time in a year." 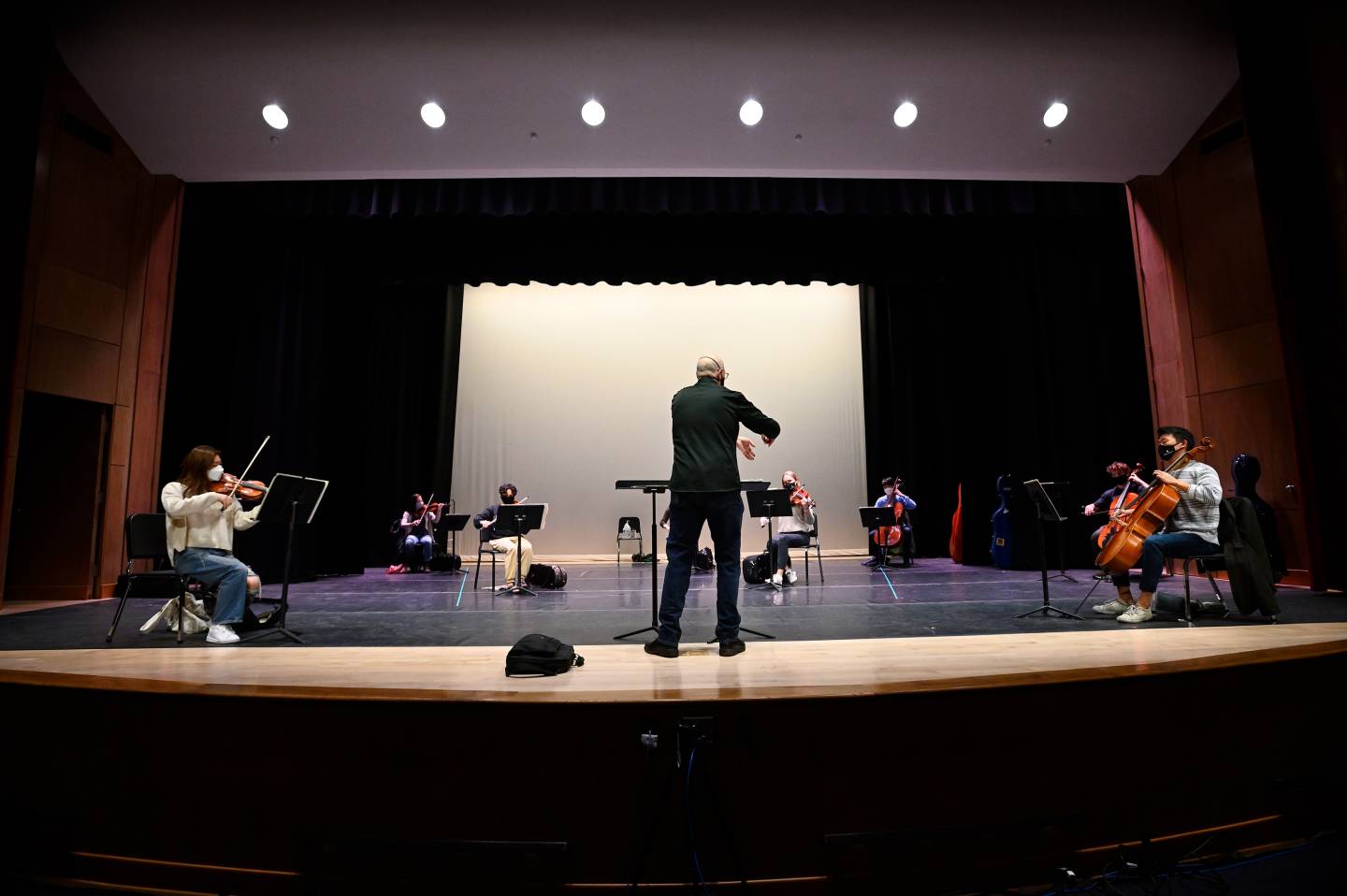 Image caption: After more than a year apart because of COVID-19, a small number of Hopkins Symphony Orchestra players returned to the Shriver Hall stage for in-person rehearsals in April.

A part of the Homewood Arts Programs and led by music director Jed Gaylin, the HSO gives students and staff at Homewood as well as local alumni and community members an opportunity to practice and perform both classical and contemporary orchestral and chamber music. For many KSAS and WSE students, it's a vital way to explore their love of music and hone their talents without the pressure of a major.

"I went to Peabody, and students in the orchestra there are trying to pursue a career in music, so it can be really stressful and sometimes competitive," Dreisin says. "What's so beautiful about the HSO is that it's people choosing to play music as part of their day-to-day lives while they focus on other things. They just want to continue playing music to improve their quality of life."

For Li, who began playing the cello in the fifth grade and grew up in youth orchestras and a community outreach ensemble that performed for nursing home residents, the HSO was a key factor in his choice to attend Hopkins. "I knew about the HSO before I even got here," he says. "When I was applying, I knew the school needed to have an orchestra."

Now, after months of preparation—including a Wes Anderson–inspired promotional video, a concert poster featuring art from award-winning illustrator David Plunkert, and hundreds of pages of photocopied sheet music—the HSO is eagerly tuning up to begin its 2021–22 season.

"The orchestra hasn't been all together since March of 2020," Dreisin says. "We had our first full rehearsal in September, and it felt really momentous. People were really excited to be able to come on stage and make music together after not being able to do much of that for the past year and a half."

The HSO's homecoming won't be without certain restrictions. Masking requirements and capacity limits create particular challenges for a performing body as large and varied as an orchestra. Typically there are about 80 people in the ensemble, Dreisin says, but university health and safety protocols stipulate that no more than 50 can be on stage at a time. To meet this requirement, and because certain instruments can't be played while wearing a mask, the orchestra's first round of shows will be held without woodwind and brass players.

"We are closely monitoring the situation and will reevaluate as we get closer to the new year," Dreisin says. "We look forward to the moment when we can all safely be back on stage together."

Adds Li: "We don't have winds and brass, and we also used to have two people to a music stand, but now we want to allow for more personal space, so there's one person to each stand. Other than that, it's honestly like rehearsal before COVID hit, and it's really nice." 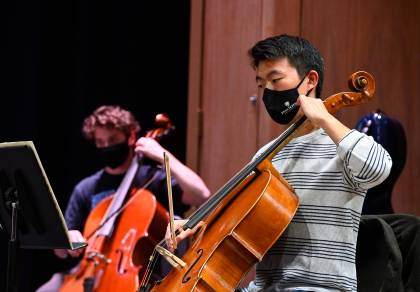 Safety precautions will be in place for the audience as well, including a 50% capacity limit, a mask requirement, and a required Prodensity check in the front of house before entering the auditorium.

The HSO's Oct. 16 performance will showcase works for strings by Carlos Simon and Pyotr Ilyich Tchaikovsky. "The Tchaikovsky Serenade for Strings is really fun to play," Li says. "It has a lot of contrasting movements, and everyone gets very involved in the piece."

The centerpiece of the night will be a performance of the first movement from Edvard Grieg's piano concerto featuring a solo by senior Yuekang Zhang.

Zhang was a winner of the 2019–20 HSO Concerto Competition, which offers accomplished student musicians who are not music majors a chance to prepare a challenging classical work and audition for a chance to perform the piece with the HSO's backing. Zhang's performance was originally meant to be the final show of the HSO's 2019–20 season before its COVID-forced cancellation. Now he will play a prominent role in the orchestra's reopening.

"I'm grateful that we have the chance to do this again," Li says. "Every year, HSO gets so many new students, and I know that during the last year, there was a whole cycle of students that we missed out on hearing. It's nice that we get to hear them this time."