Winners are typically showcased in a year-end concert, but the COVID-19 pandemic has forced a change in plans—for now 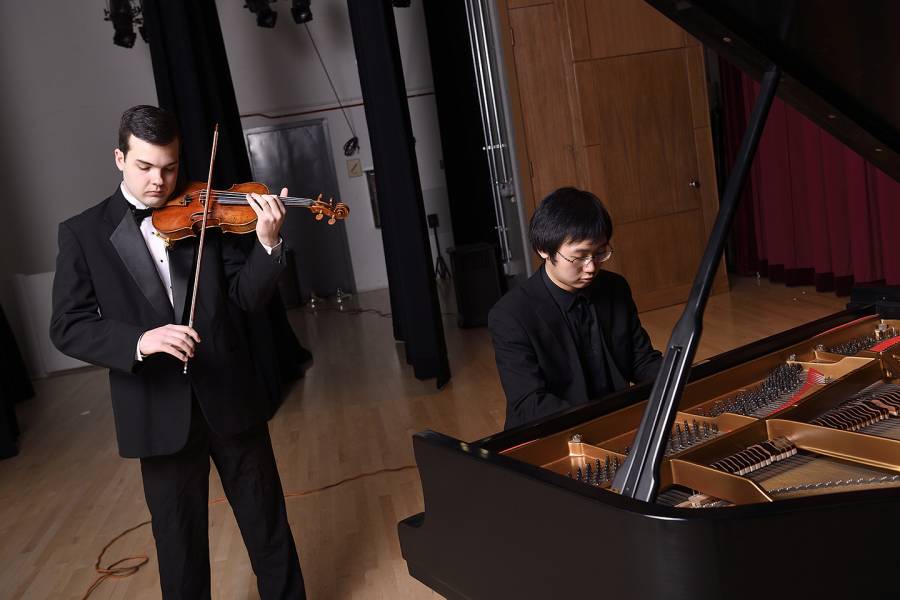 Image caption: William Harrington (left) and Yuekang Zhang won the Hopkins Symphony Orchestra Concerto Competition, but they'll have to wait to perform their customary concert solos until next season.

Music director Jed Gaylin would normally be spending this week finishing up rehearsals for the Hopkins Symphony Orchestra's season finale. Of course, these aren't normal times. The COVID-19 pandemic canceled the April 25 concert, along with every other music and performing arts event in Maryland at least through June.

For musicians, social distancing has created "a huge hole in our lives right now," Gaylin says. "Rare is the day where I'm not making music in some capacity or another—maybe studying a score, performing, rehearsing. So it's psychologically taxing on so many of us in the arts."

The canceled concert wasn't merely meant to be the capstone of the 2019–20 season, but it was also the biannual HSO Concerto Competition, an opportunity for Hopkins students from nonmusic majors to prepare a piece where they are featured on their solo instrument accompanied by orchestra. Violinist William Harrington and pianist Yuekang Zhang were chosen as the winners following the auditions in February. 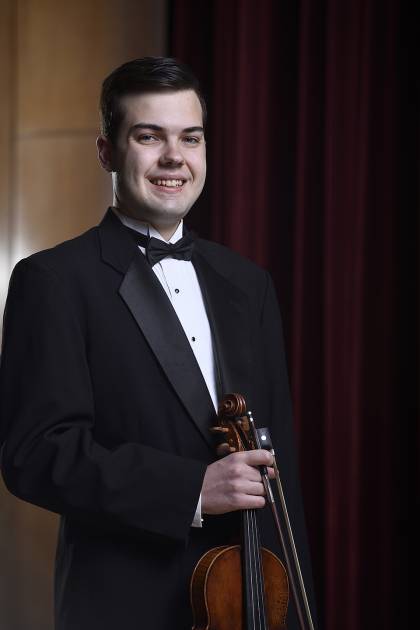 The competition was founded by former HSO member Hernan del Aguila, A&S '08, and is underwritten by an Arts Innovation Grant, and over the years the orchestra "has learned that there's an extraordinary level of talent among students who are not enrolled in a degree program at Peabody," Gaylin says. "Music is not a casual hobby for our students, it's a very central part of their lives. We know this because you can only get so good playing this kind of repertoire without devoting extraordinary amounts of discipline over many years. We've also learned that the commitment is not just one of time and enjoyment—people come to play."

Harrington, a computer science student in the Whiting School of Engineering, prepared Jean Sibelius' Violin Concerto, first movement. He started studying the violin at age four in Florida, where he grew up. The Sibelius concerto "is one of those pieces that I've been wanting to play for a long time," he says. "I finally felt like I had the necessary technical and musical skills to be able to do justice to it. It's a tough piece, kind of brooding and dark, and gets almost sinister in certain aspects of it."

He's been playing in the HSO's string section since arriving at Homewood, and adds that the ensemble "was a factor in my decision to come to school here," he says. "It's enough of a commitment that I'm getting a lot of orchestra experience, but it's not so much of a commitment that like it takes over my life. The musicians are great, the director is great, and we've done a lot of fun repertoire that I hadn't gotten to play before and some that I had, which I was able to revisit with new ideas." 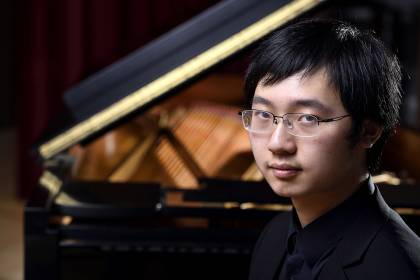 Zhang, a second-year biophysics student in the Krieger School of Arts and Sciences, has never played with the HSO, though he does participate in the Homewood Chamber Music Seminar. He started studying piano at four, played through high school, and continues to study with a teacher. He prepared Edvard Grieg's Piano Concerto, first movement. "I was working with a few concertos with my piano teacher, and I liked the melody of the Grieg the most," Zhang says. "I've listened to other Grieg pieces, including Peer Gynt, and I like his lyricism. And I think the Piano Concerto combines technical difficulty with that lyricism very well."

Gaylin was looking forward to pairing the Concerto Competition winners with Béla Bartók's Concerto for Orchestra. "It's a piece written at the end of Bartók's life, and it is very optimistic in the orchestra serving as a metaphor for many cultures and peoples—that we can come together," he says. "Given the backdrop of its devastating time in history during World War II, it's very socially progressive and compelling."

That sense of togetherness has moved online for Gaylin and the HSO musicians, who now virtually meet up to have watch parties where they view a musical performance together and talk about it. "They've been a nice way for us to connect using that musical language," Gaylin says. "We're not trying to mimic a rehearsal, we're just finding a way to connect over music in real time. And so that's been good for the community."

Gaylin says the HSO is aiming to reschedule the Concerto Competition performances next season, once everybody has a better understanding of what the fall might look like. In fact, he points out that if this current rough period for performing artists has a silver lining, it's a reminder of how important the arts are to our lives. "Before all this happened, I was hearing discussions that there's so much [music and arts] online that it's going to supplant the arts in real life," he says. "And I think this period is showing us that our cyber worlds are, at best, inadequate surrogates. That, for me, reinforces our mission."