'None of us will ever be the same'

20 years after the terrorist attacks of Sept. 11, 2001, a look back at how the Johns Hopkins University community responded and a remembrance of those who lost their lives

On the 20th anniversary of 9/11, the Hub looks back at how the Johns Hopkins University community responded in the hours and days after the terrorist attacks, a time marked by shock, sorrow, and sadness at the university, across the country, and around the world.

Two decades later, we continue to grieve the unimaginable loss of life on that day, nearly 3,000 people killed at the World Trade Center complex in New York, at the Pentagon military headquarters just outside Washington, D.C., and in a field in Somerset County, Pennsylvania, where United Airlines Flight 93 went down. We also remember the heroism and sacrifice of the many first responders and service members who rushed to help others that day, putting their own lives at risk. 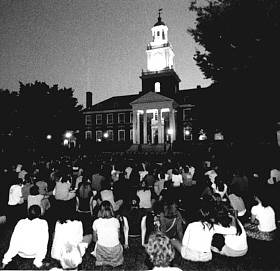 Image caption: As the sun sets behind Gilman Hill on Sept. 13, 2001, students gathered on the upper quad for a memorial vigil for the victims of the Sept. 11 terrorist attacks.

Twenty years ago today, in the immediate aftermath of the attacks of Sept. 11, the university canceled classes and thousands tried to make sense of the horrific images they were seeing on television.

From a Johns Hopkins Gazette report, published on Sept. 17:

The silence was stunning on Tuesday afternoon at Homewood. On a serene and idyllic campus filled with hope and promise, the morning's horrific terrorist attacks on America had shattered the cocoon of academic life and changed thousands of lives forever.

With classes throughout the university canceled for the day, students retreated to their rooms. In the normally hushed lobby of the Milton S. Eisenhower Library, the solemn voice of newscaster Dan Rather emanated loudly from a pair of televisions; a third set offered local news. Students sat and stared at the screens, no books in sight.

On the building's glass entrance walls, fliers promoting campus activities had been joined by new ones, taped hastily in place:

"Reach out to others in this time of sadness," read one.

"Interfaith Center open to all for support and vigil," said another.

Just a few hours after the attacks on the World Trade Center and the Pentagon, political science professor Steven David, an expert on international security, weapons and terrorism, stood in a hallway of Mergenthaler Hall with a Baltimore Sun reporter, one of many media members seeking him out for comment and analysis.

"This is the worst loss of life on American soil since the Civil War," said David, shaking his head. "None of us will ever be the same."

Later, David worked to organize a student forum to discuss the events. "How do they face this?" he asked as he planned the event, held Thursday afternoon. "They've grown up, I think, with a sense that America is largely invincible, untouchable, not involved in these crazy conflicts. And that's no longer the case."

Two days later, on the night of Thursday, Sept. 13, hundreds of members of the Hopkins community gathered on Keyser Quad for a candlelight memorial, to mourn, to remember, and to pray.

Brody noted that several immediate relatives of students were missing in the disasters, and that an employee of the Johns Hopkins Applied Physics Laboratory, Ron Vauk, was missing and presumed dead. On Sept. 11, Vauk was on his annual two-week Reserve duty in the Navy Command Center at the Pentagon. He was the watch commander, passing along information about the two jets that had crashed into the World Trade Center that morning. Vauk, a lieutenant commander in the U.S. Naval Reserve, was killed when American Airlines Flight 77 hit the Pentagon. He was 37 years old.

A seventh Hopkins alum, Writing Seminars graduate Sneha Philip '91, was last seen on Sept. 10, 2001, in the vicinity of the World Trade Center and is presumed killed in the attacks.

On Sept. 13, 2001, The News-Letter published accounts from a few Hopkins students about where they were and what they were doing as the attacks unfolded on that Tuesday morning. First-year student Mike Spiciarich said he had just gotten out of the shower in the AMRs when he heard the news of two planes hitting the twin towers. The Long Island native called home to make sure his family members were OK—he had two cousins who worked in the World Trade Center but were unharmed. Then he went to the Terrace Court Cafe for breakfast, where TV news broadcasts broke the news of a third attack, this one at the Pentagon.

"Everyone was talking a little bit," Spiciarich told The News-Letter, "and then, it just went silent." 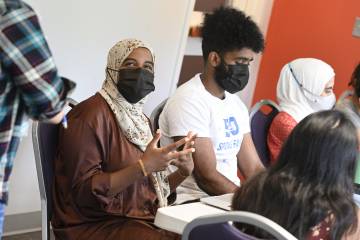 Published Sept 9, 2021
New course from Program in Islamic Studies provides tools to research, analyze the personal and systemic impacts of 9/11 while building advocacy and allyship