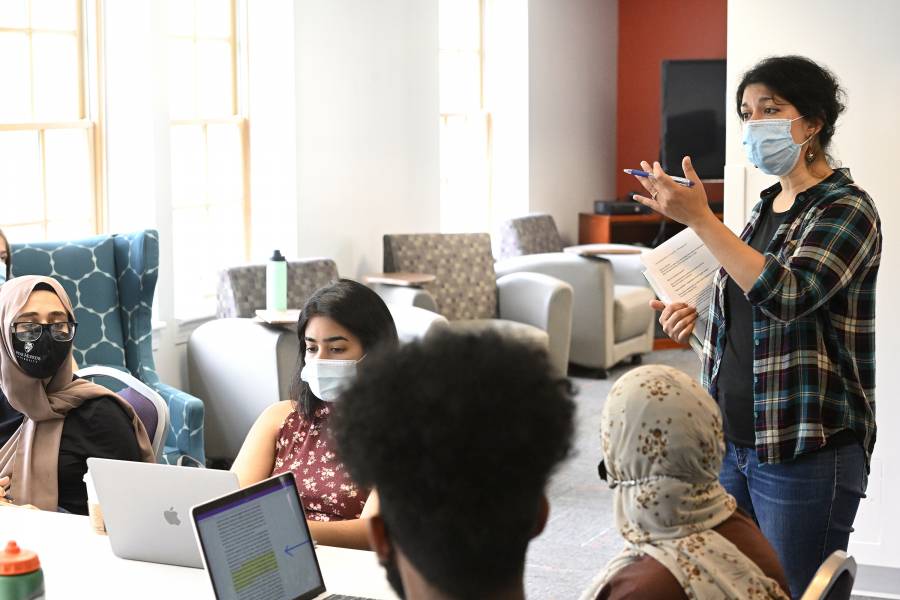 Turning 9/11 trauma into action and advocacy

On September 11, 2001, Homayra Ziad, director of the Program in Islamic Studies at the Krieger School, was about the age of the students in the class she is co-teaching this fall about 9/11 and its aftermath, 20 years later.

"Never Forget: Muslims, Islamophobia, and Dissent after 9/11" is a course she had wanted to teach for a while, but it was only recently that she felt emotionally prepared to engage with her own 9/11-related trauma to the extent required by such an undertaking.

"My entire experience of being Muslim in the United States changed forever after 9/11," Ziad says.

Having emigrated from Pakistan as a young child, she watched as family members were required to sign in hundreds of times on the Muslim registry; as acquaintances disappeared from the streets or were injured in hate crimes; as everyone she knew stopped talking in their places of worship because the person beside them might be an informant; and stopped talking about their religious practice in general for fear it would be used as proof of their radicalism.

"9/11 fundamentally changed who I was; it put me on a trajectory of bringing education and advocacy together to think about education as consciousness raising, as awareness raising."
Homayra Ziad
Director of the Program in Islamic Studies

More broadly, she says she watched as 9/11 became a symbol used to justify invasions of sovereign nations and the repression of communities of color in the U.S.—Muslim and otherwise. "That was where 9/11 became a pivotal moment, because it shifted the whole definition of the security state and where we started becoming comfortable as a nation with being surveilled and with being controlled," she says.

So when Darakshan Raja, co-founder and co-director of the nonprofit Justice for Muslims Collective, or JMC, in Washington, D.C., asked if Ziad had students available to help with an oral history project, she realized she was facing an opportunity to explore the themes within 9/11's impact using the framework she had learned works best over her 20 years in the classroom: a blend of academic analysis and community connection.

"9/11 fundamentally changed who I was; it put me on a trajectory of bringing education and advocacy together to think about education as consciousness raising, as awareness raising," Ziad says. "I always knew that we learn best when we are given an analysis and we struggle with that, we engage that, and then we are brought into a living, breathing connection with the communities we are studying. This course is bringing all of these things together full circle 20 years later."

Ziad and Raja designed the course to explore how Muslim communities navigated and contested belonging and political and cultural agency amid state-sponsored violence and national debates on race, gender, citizenship, and national security post-9/11. The 20 Muslim and non-Muslim students use ethnography, first-person narratives, film, and online resources to plumb 9/11's impact on American Muslim communities, and learn about ongoing community activism and organizing from JMC. 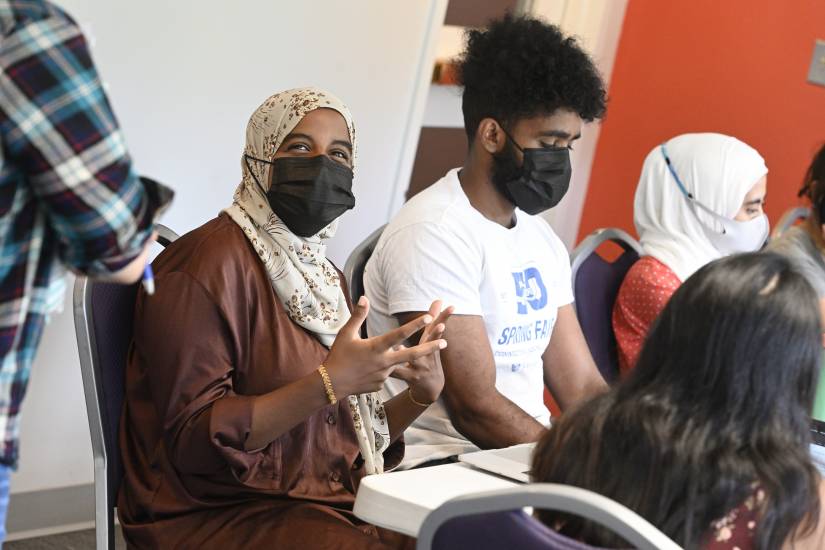 Students will also work with community members in the D.C., Maryland, and Virginia area who protested anti-Muslim activities, or supported those targeted by law enforcement, or worked intersectionally with other repressed communities. Their oral histories will be part of JMC's Muslim Abolitionist Futures' Community Resistance Archives focused on fighting the war on terror. The outcome will be an online exhibit to share their stories—which have never been cataloged—in ways the participants want to be represented.

"Often there isn't clear documentation of post 9/11 organizing by Muslim communities, especially against war on terror policies," Raja says. "We don't have community archives where community members—who are organizers and want to study from the vantage point of making social change—are allowed the space to study movement and organizing as a way to build and deepen work. And the lack of movement histories that are accessible and available for communities makes it hard to ground organizers who want to do this work, especially younger generations of Muslims who have been deeply politicized by post 9/11 policies."

9/11 created collective trauma for all Americans, Ziad says, not only through the horror of the attacks, but leaving in its wake a new brand of national security, criminal justice, cultural and political discourse, and national resource allocation. Laws applied to issues of surveillance, detention, and prosecution affect all Americans' civil rights.

For Ziad's Muslim students, born just around the time of the attacks, it also created an identity crisis. As children, many learned to internalize the Islamophobia they saw around them, she says. They were taught not to speak openly about being Muslim for fear of being judged or worse, and received the message that their religion and culture are shameful.

"Having grown up as a Muslim woman in America post 9/11 and throughout the war on terror, I wanted to better understand how the resulting Islamophobic policies and cultural shifts shaped the world we live in today," says Lubna Azmi, a junior majoring in international studies. "Dr. Ziad centers impacted communities in all of her lessons, and getting that outlook when learning about Muslims post 9/11 was really important to me as well."

For all that they are in the public eye, Ziad says Muslims remain little understood in the U.S. It is the most racially and ethnically diverse community in the country—often a strength, but sometimes a burden under the gaze of Islamophobia: Muslim communities experience pressure to speak with one voice, to support the U.S. government wholesale to show they are not dangerous. Those prescriptions are beginning to evolve, but back when Ziad was organizing with other young Muslim women, they translated to a kind of dictum against airing dirty laundry in public. 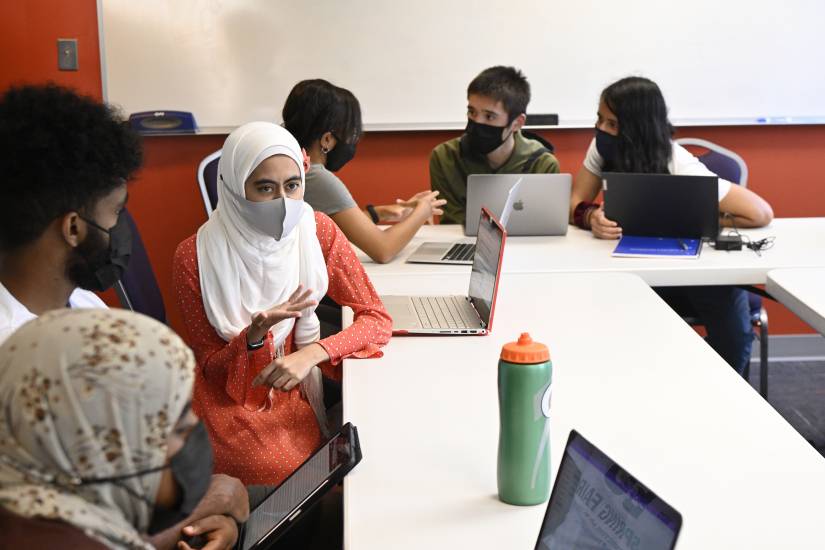 "As young Muslim women, we couldn't talk about sexual violence in American Muslim communities in public, because the immediate response in the public gaze would be 'your men are all violent and your religion is oppressive,' as opposed to saying sexual violence is an issue in all communities and let's work together to end it," Ziad says.

As much as the course gives students tools to research and analyze these personal and systemic impacts, it also gives them the means to turn their knowledge toward action and advocacy, Ziad says. New, difficult information can be overwhelming, leaving students to wonder, now what? Raja and JMC offer them options and connections.

"Raja teaches how to carry forward these learnings into the kind of intersectional organizing that moves communities forward together in dealing with our collective trauma around so much of what has happened 9/11 onwards," Ziad says. "We want students to take away, of course, content knowledge around what has happened in the last 20 years and how communities have resisted and activated themselves against these developments in these different realms, but also to develop skills and resources for advocacy and allyship with different communities, to walk away with not just ways of thinking but also ways of doing, with networks, with contacts, with an investment in an organization. We hope that we're supporting the next generation of folks who will be working with organizations such as this."

The course is partly supported by a grant from the Wabash Center for Teaching and Learning in Theology and Religion, through which Ziad is exploring community-engaged models with scholar-activist colleagues around the country. This work is being conducted in partnership with Shawntay Stocks formerly of the Center for Social Concern and Hussein Rashid at islamicate, L3C, a consultancy focusing on religious literacy. Ziad is also a fellow in the Center for Social Concern's Engaged Scholar Faculty and Community Fellows program, where she and three other faculty fellows will spend the year workshopping their courses together. Raja serves as Community Partner Fellow in the same program.

For Ziad, the confluence of analysis, action, and support provides a context for teaching and learning she has awaited for 20 years. "Whether Muslim or not, we all carry a certain collective trauma around this event, and I, too, am in this conversation, not outside of it; I don't have a perfect handle on it," she says. "Working through it and the impact of it alongside the students is one of the things I'm most excited about. And to be doing that alongside a power-building, justice-centered group was exactly what I had hoped for."