L. Mario Amzel, professor and former director of the Department of Biophysics & Biophysical Chemistry at the Johns Hopkins University School of Medicine, died on Aug. 28 from illness. 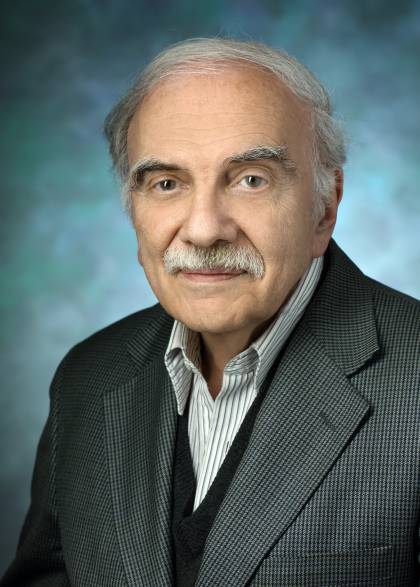 A resident of Baltimore City, Amzel was widely recognized as an international leader in his field of biophysics and was a member of the Johns Hopkins team that produced the first high-resolution images of how antibody-antigen recognition—the body's reaction to fighting off disease and illness—occurs.

For the past 15 years, Amzel led the Department of Biophysics & Biophysical Chemistry, one of the leading programs in the world.

Amzel was born in Argentina and earned his PhD in physical chemistry at the Universidad de Buenos Aires. He began his postdoctoral fellowship at Johns Hopkins in 1969 and remained at Johns Hopkins, rising to full professorial status in 1984.

Amzel and his laboratory members determined the structure and mechanisms of many proteins and protein complexes. His early work to crystallize and determine the structure of an antibody was of seminal importance in immunology.

Another area of Amzel's research involved the cancer-related protein, PI3K, which is part of the body's hormone signaling system. He worked to understand PI3K's structure, its normal state, and how cancer mutations inappropriately activate it.

In addition, Amzel's research led to major discoveries to determine how proteins regulate sodium channels in cardiac cells, a key factor in enabling the heart to beat.

"He was our scientist's scientist—one of our deepest and broadest thinkers—and a thoughtful, warm and caring colleague, who always put people—especially students—above all else."
Bertrand Garcia-Moreno
Professor and vice dean for natural sciences

"He was our scientist's scientist—one of our deepest and broadest thinkers—and a thoughtful, warm and caring colleague, who always put people—especially students—above all else," says Bertrand Garcia-Moreno, professor in the Department of Biophysics and the Krieger School, and vice dean for natural sciences at Johns Hopkins.

In 2006, Amzel was named director of the Department of Biophysics & Biophysical Chemistry, after leading the department on an interim basis for the previous three years. He stepped down from the position in May and continued leading his research laboratory.

His lab had been using computational methods to reveal changes in protein shape.

Amzel won the 1994 Teacher of the Year Award and had been an advisory committee member for the Institute for Excellence in Education since 2009.

He mentored and inspired generations of young scientists, training 33 graduate students and 15 postdoctoral fellows in his laboratory.

"Mario was a generous colleague, who leaves behind an indelible imprint on our department and on Johns Hopkins," says Cynthia Wolberger, professor and director of the Department of Biophysics & Biophysical Chemistry at the School of Medicine. "Mario transformed the department by hiring new faculty members, broadening the department's scope to encompass new areas of biophysics and adding new enabling technologies."

He also served in various roles for Johns Hopkins graduate programs in Molecular Biophysics and Biochemistry, Cellular and Molecular Biology. In addition, he served on Johns Hopkins' Advisory Board of the Medical Faculty since 2007.

Amzel lectured at leading universities and research institutes around the world and authored more than 250 journal articles. He participated in various committees, councils, and advisory panels for the Biophysical Society, National Science Foundation, and National Institutes of Health.

He was a fellow of the American Association for the Advancement of Science and of the Biophysical Society. He was selected as a Damon Runyon postdoctoral fellow and a Coleman Fellow in Life Sciences by the Ben Gurion University in Israel. He also won the RAICES Prize from the Ministerio de Ciencia, Technologia e Innovacion Productiva, in Argentina.

Amzel is survived by his partner Janna Wehrle, two daughters, and a granddaughter. Amzel's family will hold a private funeral. A memorial service at Johns Hopkins is being planned.