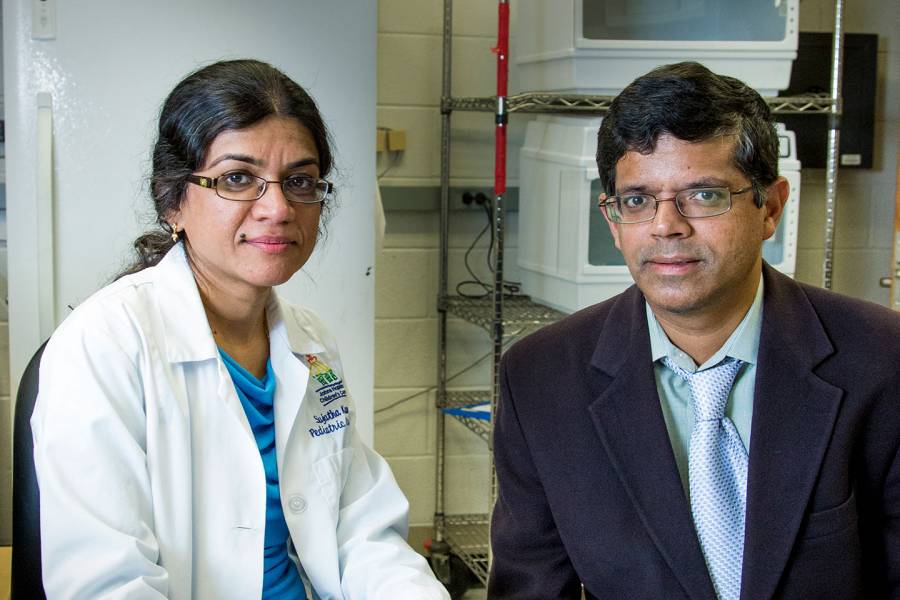 When Johns Hopkins researchers Sujatha Kannan and her husband Kannan Rangaramanujam were developing a novel drug to treat COVID-19, they never imagined their work would become personal. But it did, heartbreakingly so.

Since the pandemic began, they have lost four close family members to the disease. Kannan's parents, American citizens on a three-month family visit to India in late 2019, became stranded when airports shut down just four days before they were due to go home, and both took fatally ill the following September. Her uncle and Rangaramanujam's 94-year-old grandmother, stricken this year, also died.

"We have always felt what we are doing is important and could affect many lives, but losing our own loved ones made it all that more real. It especially hits home because we have a therapy we believe would have worked for them."
Sujatha Kannan
Co-founder of Ashvattha Therapeutics

The tragedy was a painful reminder that scientists themselves aren't always insulated from the impacts of the pathogens they study. "This is not something we thought would happen," says Kannan (she and her husband are from Southern India, where wives often take their husbands' first names as their last). "We have always felt what we are doing is important and could affect many lives, but losing our own loved ones made it all that more real. It especially hits home because we have a therapy we believe would have worked for them."

The experimental drug, named OP-101, is one they believe holds promise for treating the severe inflammation that is a hallmark of COVID-19 and is often the main cause of death. Inflammation is the body's normal response to fighting infections, but it can cause serious damage when it gets out of control in COVID-19 patients. This inflammation occurs not only in the lungs but throughout the body, shutting down multiple critical organs and resulting in death. Experts also believe that long-term inflammation may account for the lingering effects seen in COVID-19 "long-haulers" who have recovered from their initial bout with the virus.

Kannan, a professor of anesthesiology and critical care medicine and pediatrics at the Johns Hopkins School of Medicine, and Rangaramanujam, professor of ophthalmology and co-director of the Center for Nanomedicine at the Wilmer Eye Institute at the School of Medicine, developed OP-101 by attaching n-acetyl cysteine—an antioxidant that treats acetaminophen poisoning—to a dendrimer, a synthetic nanoparticle one-thousandth of the thickness of a sheet of paper. That dendrimer delivers the drug directly to activated macrophages, specific immune system cells that are one of the drivers of inflammation, especially in the lungs and brain. It's a recent example from the growing field of precision medicine, where researchers design therapies capable of homing in on selected sites in the body.

"The beauty of this approach is that it can target the exact cell you want to have an effect on," says Nauder Faraday, a professor of anesthesiology and critical care medicine at the School of Medicine and the Johns Hopkins principal investigator of a small clinical study that recently tested the drug.

The trial had a total of 24 participants across five medical systems, including three COVID-19 patients at Johns Hopkins Hospital. But because the study was double-blind, neither Faraday nor the subjects knew whether they received OP-101 or the placebo. "All were hospitalized and quite ill," Faraday says. "Two people got better faster than I thought they would, and one didn't. Nobody died. But I still don't know who got what."

Unlike the blinded trial's investigators, the married researchers who created the drug have seen the preliminary data and, despite the study's small size, are excited by it. They plan to present their data to the Food and Drug Administration soon and hope to begin a larger clinical trial in the fall to confirm the findings.

"We saw a 40% improvement in survival among severe COVID-19 patients who got the drug," Rangaramanujam says. "A single dose—an hour-long intravenous infusion—actually worked for 30 days and kept the inflammation down. Being able to treat neurological injuries associated with COVID-19, such as stroke, has big consequences, since a significant number of people who survive still have some persistent neurological effects. This drug targets macrophages activated throughout the body: lungs, heart, brain, pretty much all organs that are affected by hyperinflammation."

Five years ago, Kannan and Rangaramanujam founded a startup that ultimately sponsored the trial, Ashvattha Therapeutics, so named after a mythical tree in Hindu scripture associated with enlightenment. "Also, the nanoparticle looks like a tree," Rangaramanujam says. OP-101 and the dendrimer technique were its first discoveries. The company licenses its work through Johns Hopkins Technology Ventures and maintains a research lab at FastForward, JHTV's startup accelerator. JHTV has helped the company pursue patent protection for its technology.

They are enthusiastic about the drug's potential and believe it also may benefit COVID "long haulers"—they hope to pursue a trial sometime in the future—and even beyond COVID. Since the therapy focuses on neurological effects, they think ultimately it also could help patients with such disorders as cerebral palsy, amyotrophic lateral sclerosis (ALS), multiple sclerosis, and Rett syndrome, among others.

Nevertheless, their feelings about the drug are tempered by the knowledge their loved ones never had access to it. Kannan's mother, Padma Govind, a retired financial investment consultant, and her father, Govind Jagannathan, a retired marine engineer, had been in the United States for 20 years and lived with their daughter and son-in-law. "Our kids grew up with them," Kannan says. In December 2019, they traveled to Chennai, India, to visit relatives. They were scheduled to return March 24, 2020, but when airports closed in mid-March they were forced to wait out the lockdown in the house they still owned in Chennai. They contracted COVID-19 in late September and were hospitalized shortly thereafter.

When international flights to and from Chennai resumed in early October, Kannan flew there, but she couldn't bring the drug with her. She says she would have needed special permission from the FDA and the host country, which "would have taken too long."

Moreover, it wouldn't have made a difference. Her mother had a seizure and died overnight on Oct. 10, 2020, a few hours before Kannan got there. "I think she must have had encephalopathy, a brain injury," Kannan says. Her father slowly improved and flew home with his daughter in November, but he died the following March from post-COVID cardiac complications, Kannan says.

Her uncle and Rangaramanujam's elderly grandmother also died earlier this year during a recent catastrophic surge of infections and fatalities that has decimated India's health care system.

It's been a difficult journey for the two scientists. Yet, although still grieving, they say they are more dedicated than ever to their research.

"It's because of them that we do this," Kannan says of her parents. "They were always excited about the work we were doing, especially when we told them we had a drug that could help so many people. It could have helped them. That's why it's been so hard. It's personal for me because it's my family. But there are families everywhere … who have been affected. I feel the best way to keep my parents' memories alive is to help as many people as possible with this therapy, so others don't have to experience what we did." 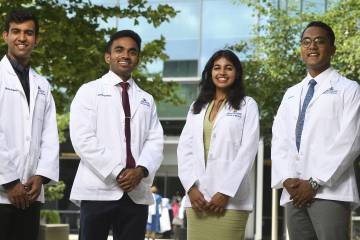 Confronting a COVID-19 crisis half a world away

Published July 12, 2021
'Dome' catches up with the Hopkins students and faculty working to combat the coronavirus pandemic in India from afar 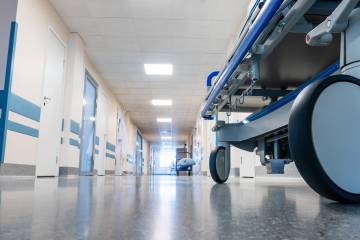 Published March 22, 2021
Headed by a team of university epidemiologists, the Johns Hopkins COVID Long Study seeks to uncover answers about why some people suffer long-term effects of COVID-19 infection 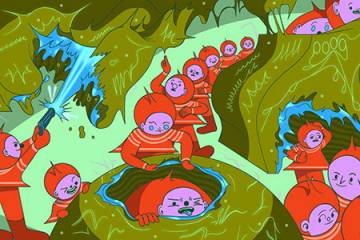 Published May 4, 2021
Bacteriophage therapy could help in the fight against antibiotic-resistant bacteria