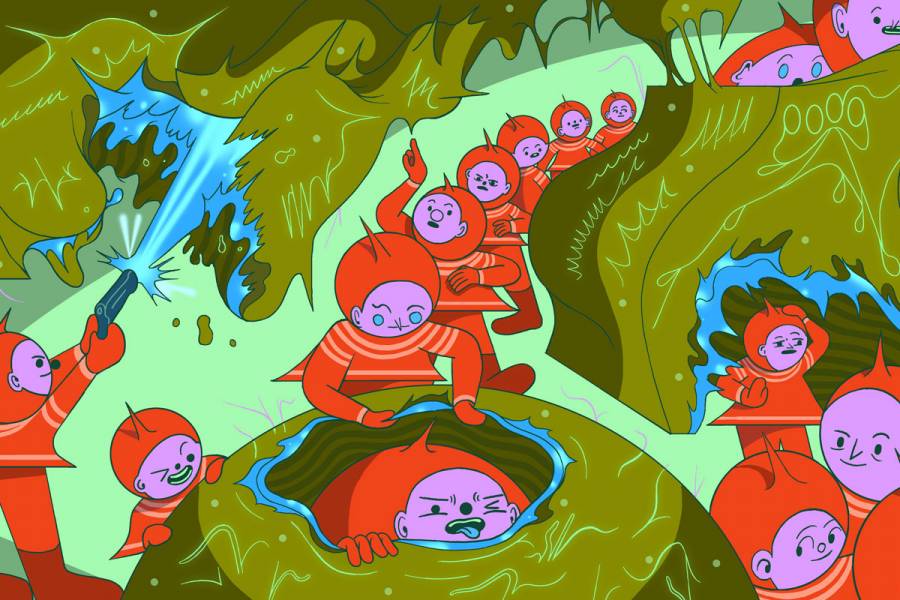 Phage therapy could help in the fight against antibiotic-resistant bacteria

Infectious diseases expert Pranita Tamma, HS '07, SPH '11 (MHS), has never forgotten the heartbreaking story of a college student who was admitted to the Johns Hopkins Hospital in 2008 with a raging bacterial infection.

The patient had cystic fibrosis, a genetic disorder that affects breathing and digestion. People with the disease produce a thick, sticky mucus that blocks airways, causing lung damage, and that traps bacteria, making them vulnerable to infections. And while anyone can fall ill with a resistant bacterial infection, patients with cystic fibrosis are especially susceptible because they tend to "carry" bacteria and suffer recurrent bouts of active infection. When clinicians repeatedly use antibiotics against these infections, the bacteria become increasingly difficult, if not impossible, to treat.

Tamma and the rest of the medical team involved in the patient's care had prescribed antibiotics to treat the infection, but the bacteria failed to respond. He died within two days. "Nothing worked," recalls Tamma, an associate professor of pediatrics in the Division of Infectious Diseases at the Johns Hopkins School of Medicine. "The organism was resistant to everything. It was one of my saddest experiences as a doctor."

The experience sobered her. She vowed to do whatever she could as a researcher to combat antibiotic resistance. Today, Tamma is helping launch a multicenter study, including a Hopkins site, to test an ancient scientific wonder gaining popularity in the fight against antibiotic resistance. Bacteriophages, as they're called, are special viruses capable of killing bacteria. Rather than causing diseases, bacteriophages have the ability to cure them.

Phages are everywhere. They are found in sewage, wastewater, soil, marine water, animal intestines, and even in the human gut. There are more bacteriophages than any other viruses, and, in fact, they are the most abundant organism on Earth (numbering more than 1031). This makes them an attractive weapon against antibiotic resistance, "one of the biggest threats to global health, food security, and development today," according to the World Health Organization. At least 2.8 million Americans become infected annually with resistant organisms, resulting in more than 35,000 deaths, according to the CDC.

Antibiotic resistance poses a significant danger to everyone, not just those with cystic fibrosis. It results from such practices as the overuse of antibiotics, and from inappropriately administering them to treat viruses in people or promote growth in livestock. This allows pathogens to elude the very drugs designed to kill them. Common infections, such as pneumonia, staph, gonorrhea, and tuberculosis, are becoming resistant and very hard to treat. Tamma is working with Robert T. Schooley, Med '74 (MD), an infectious diseases specialist at the University of California, San Diego, who designed the study and is a leading authority on bacteriophages.

The clinical trial, for which Schooley is lead principal investigator and Tamma is co-principal investigator, will evaluate whether bacteriophages can destroy or significantly reduce the load of a bacterium carried by cystic fibrosis patients, thus staving off or preventing life-threatening infections. The study is part of the Antibacterial Resistance Leadership Group, a research network of 50 leading experts based at the Duke Clinical Research Institute, which has a $102.5 million grant from the National Institute of Allergy and Infectious Diseases to support its resistance work.

The name bacteriophages, from the Greek for "bacteria eaters," is a misnomer since the viruses don't literally "eat" bacteria but rather infect them and blow them apart. Every bacterium has a corresponding phage—often many phages—targeted to kill it. Phages were discovered by accident more than a century ago, in 1915 and 1917, by two scientists working independently, who found that viruses had contaminated their bacterial lab cultures and were killing them.

"Phages will have an increasing role in the coming years in saving many lives that will otherwise be lost."
Robert T. Schooley
Infectious disease specialist

But clinicians didn't use phages against bacterial diseases in the early 20th century, as they were hard to isolate and purify, and difficult to administer. Also, antibiotics came along a little more than a decade later and were plentiful, potent, and easy to use. Scientists have since overcome those early obstacles, and with the growing danger posed by antibiotic resistance, they now see phages as an important potential tool, either as an adjunct to conventional antibiotics or as a replacement when antibiotics don't work.

One advantage is that they are bacteria-specific. Each attacks only a single species of bacteria, whereas antibiotics kill all bacteria, even the good ones. Phages enter bacterial cells, where they replicate, causing the cells to rupture. This releases additional phages, making the treatment even more powerful.

"Phages will have an increasing role in the coming years in saving many lives that will otherwise be lost," says Schooley, who in 2017 used phage therapy to save the life of Tom Patterson, a colleague who nearly died after contracting a lethal infection from a resistant strain of bacteria. He predicts they also ultimately may help intubated COVID-19 patients who often develop resistant bacterial infections, "although they aren't in widespread use at this point," he says.

Several institutions have established phage libraries to collect phages and identify the bacteria they target. This involves taking a patient's multidrug-resistant bacterium, growing it on a "lawn" of agar (a jellylike substance used to culture microorganisms) with an overlay of phages, then looking for "holes" in the lawn where the phages have killed the bacteria.

Bacteria can develop resistance to phages, as they do to antibiotics. But because millions of genetically different phages can attack a specific bacterium, it's possible to create phage "cocktails" to prevent resistance, an approach similar to the use of antiviral drugs to treat HIV.

This man should have died, but unusual infusions saved his life

The food we eat is contributing to the rise of superbugs, report suggests

The UC San Diego School of Medicine has established one such phage library. Its Center for Innovative Phage Applications and Therapeutics, co-directed by Schooley and Steffanie Strathdee, a former Hopkins Bloomberg School of Public Health associate professor, collects and analyzes phages, provides them to physicians, and offers advice on how to use them.

The Food and Drug Administration has not yet licensed phage therapy, but it has allowed its use in more than 50 instances under its investigational new drug authority, a provision that permits patients to take certain drugs for research purposes before they are approved, especially in situations when no alternatives for them exist.

Schooley recently authored a paper describing the first 10 cases at UC San Diego. In his clinical experience, he has found the treatment highly effective, adding that when it fails, it's usually because "patients are too sick and die before we have a chance to start" phage therapy.

The coming cystic fibrosis trial is expected to begin in August with 72 patients across 20 sites. Participants all must have Pseudomonas aeruginosa in their lungs, a bacterium that often becomes treatment resistant. Half will receive a single dose of a four-phage cocktail given intravenously, while the control group will receive a saline solution. Researchers will follow them for 30 days to watch what happens to the bacteria.

"We want to see if the phages result in a significant reduction of the Pseudomonas burden in the patients' lungs," Tamma says. "If this is successful, we will be able to say: 'Yes, phages do make a difference.'"

If they do—and experts believe that they will—it will be an important step toward FDA approval and widespread use. Moreover, unlike antibiotics, which are being outpaced by resistant bacteria, the supply of phages will never run out.

"Phages have been around for more than 300,000 years, and are constantly improvising to stay ahead of bacterial evolution," Schooley says. "Each bacterium has a universe of phages active against it. There are many more phages than there are chemists making antibiotics. The source is unlimited."