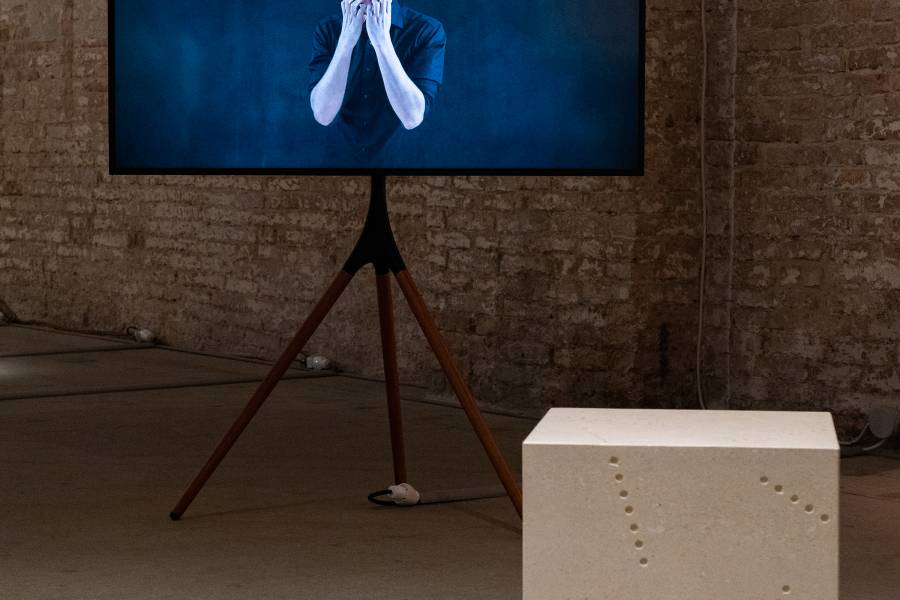 An archeology of disability

At the Venice Biennale, a reimagining of the Acropolis

In ancient times, the path to the Acropolis was a ramp leading from the marketplace of the Agora up to the iconic site where the Parthenon stood. People of all abilities navigated the sloping route, helping one another or being helped as needed within the collective experience of the ascent.

In the 19th century, the path was changed to its current form: a narrow, switchbacking trail in keeping with the times by embracing the romance of the solitary pilgrimage. But lost was the journey's communal aspect, along with the potential for visitors with disabilities to join their peers in the ascent. In an attempt to make the site accessible for the 2004 Olympics, for years an elevator car clung to a vertical rock face—until recently, the sole alternative for those unable to navigate the path, and too small for a companion to join them.

In May, an installation opened at the Venice Biennale, the prestigious cultural institution, that explores an experiment: a historic reconstruction of the Acropolis through a lens of disability. What might it be like to use languages and structures related to disability today to more deeply understand the structures and experiences of the past? asked the installation's creators.

One of those creators is Jennifer Stager, an assistant professor of art history at Johns Hopkins University, whose usual focus is color in ancient art and architecture. With colleagues David Gissen, a professor of architecture and urban history at the Parsons School of Design and the New School University, and Mantha Zarmakoupi, an assistant professor in Roman architecture at the University of Pennsylvania, Stager envisioned and produced the Biennale research station titled An Archeology of Disability, which includes a reimagining of the ancient ramp, a gallery of paintings at the top of the ramp, and various versions of a small stone seat. 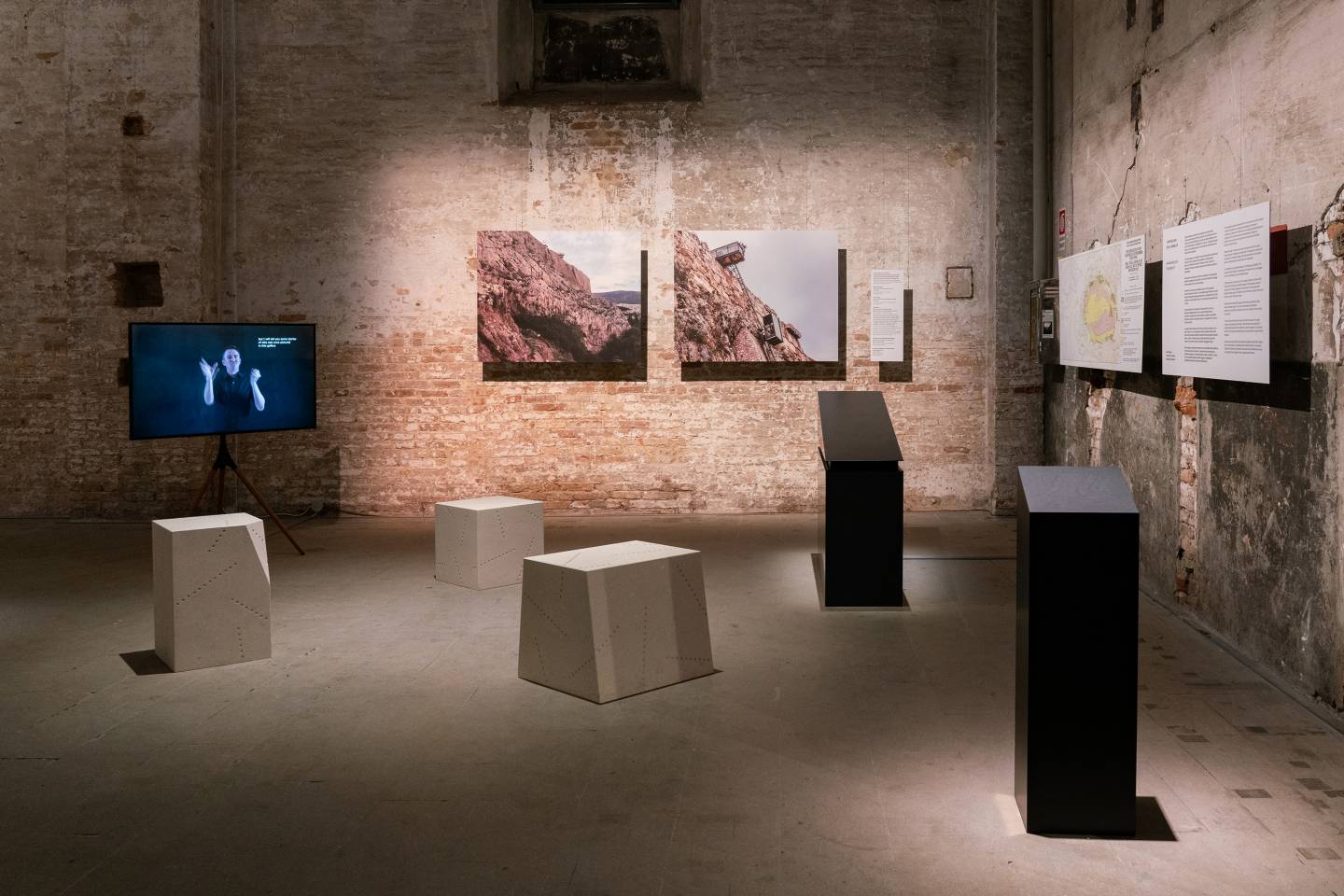 "The premise of our show is that there are different forms and languages used by contemporary disabled people that, when you translate objects from the ancient past using those, teach us about the past as well," Stager says.

The rock seats derive from an ancient travel writer's description of "a stone large enough to be used as a seat for a small man" at the top of the original ramp. In the installation, concrete structures in various shapes dot the area, complete with drilled holes to invoke the layering on a weathered rock.

The model of the ramp is a kind of sculpture that, when touched, vibrates lightly, reminiscent of the gentle vibration created by many feet moving together.

Stager's primary focus was making a film that recreates, in sign language, a sense of the paintings that once graced the area at the top of the ramp. No one is certain what the paintings depicted, but using texts and visual comparanda of the time, Stager imagined scenes related to the paintings' themes of gendered violence, queer love, and abuse of power.

In the second century CE, a rhetorical practice called ekphrasis was popular. A vivid description, it was sometimes used to reconstruct paintings for an audience. In Stager's film, the deaf actor Christopher Tester uses American and Greek sign languages to describe what the paintings might have portrayed. The visual elements of his signing add new depth to the paintings' stories and context, Stager says.

"There were ways in which his performance of the script deepened our collective understanding of the art and architecture that we were creating the script around," she says. "One thing that I've been interested in, in my research in general, are questions of translation and how each translation is itself a kind of new text, and that you learn things about the old text through this new translation. And I was interested in what we might learn by re-creating these paintings in sign language."

Voiceover artist Pia Hargrove offers descriptions of the paintings in an audio format, creating another angle into an experience of the past. Brian Cole, associate director of Johns Hopkins Sheridan Libraries' Center for Educational Resources, taught Stager to edit captions in Panopto so they would match Tester's signs, but the filmmakers wanted to place them more artistically than the typical system at the bottom of the frame. The film's editor, Denis Lyons of Clear Cut Films Germany, wove together Tester's various scenes and worked with Stager to use open captioning, where the text is laid directly on the film. The result has the feel of an art film.

Caroline Cerilli, a rising Hopkins senior majoring in public health studies, worked on the film with Stager and wrote about her experience on a blog titled Peopling the Past: Real People in the Ancient World and the People Who Study Them. "In this film, Christopher performs how the Acropolis may have looked centuries ago through sign," Cerilli wrote. "His performance is visual and physical, even as he walks us through a gallery of pieces that we have no images of and very few records of. …[H]e brings to life the movement and physicality of what may have been.

"At the same time, Pia's voiceover work tells the same story in a completely different and beautiful way. While building from the same script, each performance evokes different imaginings of the same space through using different senses. I hope that after viewing this film, people consider how pieces of disability culture including but also beyond ASL can help us consider unrelated topics of interest in new ways, as long as someone from the community is informing the process."

One of the installation's takeaways is a kind of integration of disability into our perception of the past, Stager says. Disabilities have existed as long as people have, and they would have had a place and played a role in the structures and activities of the past as well as the present. What can that tell us about the past, Stager asks. What can it tell us about today?

When Stager chose to recreate the experience of the paintings in sign language, it wasn't because she believed sign language existed then—she didn't. (But while researching something else, she happened upon a reference to a physical language in ancient Greek times, in the context of multilinguality and the difficulty of translating across speakers of different languages. Greek rhetorician Lucian wrote a comedic exchange between Hermes and Zeus, she says, in which Hermes indicates that he couldn't understand all the languages spoken amongst the audience, so he had to speak with his hands.)

"One of our intentions is to say that you don't need to know that there was sign language in the historic past to use it as a valid means of translating something that is no longer there," Stager says.

Similarly, the research station serves as a kind of bridge across the current tensions between historic preservation and disability rights, which Stager and her colleagues cast as something of a false dichotomy. "We show that the issue is not only about making something accessible," she says. "It's also about recognizing that there is a contribution to be made by disabled people that all of us could benefit from."

The research station will be on display at the Biennale until November, and then travel to two future locations. This winter, Harvard's Center for Hellenic Studies, which provided part of the project's funding, will host a digital screening of the film along with a Q&A session.