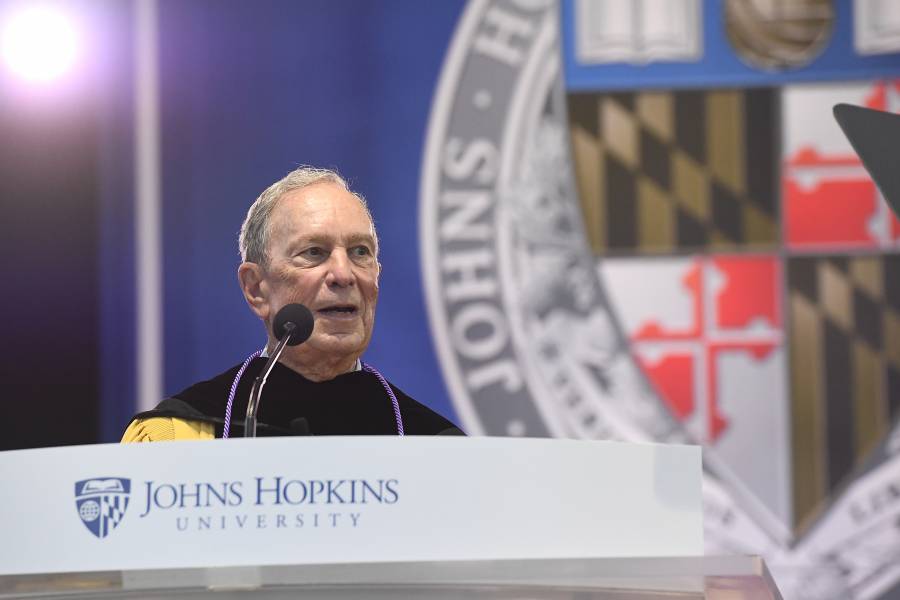 Michael Bloomberg urges graduates to 'be present for others'

Entrepreneur, philanthropist, three-term mayor of New York City, and Johns Hopkins University graduate Michael R. Bloomberg returned to campus to address the Class of 2021 at Commencement on Thursday, speaking to the graduates about "the importance of togetherness" after a year largely marked by virtual gathering amid the COVID-19 pandemic.

This was Bloomberg's third time offering the university's Commencement speech, and the first since 2010.

"I hope you will take one big idea with you, because it really could not be more important," he said. "And that is simply, be present for others, in your careers and your personal lives. Because ultimately, it's only through the power of our relationships that we can fulfill our potential and that we can build teams capable of creating a society that is more just, more equal, more peaceful, and, in the words of our nation's founders, more perfect."

Over the past 56 years, Bloomberg's unparalleled support for Johns Hopkins has immeasurably enhanced everything from the undergraduate experience, to campus infrastructure, to the possibility for scientific discovery, all in the name of ensuring that more young people from all backgrounds have access to higher education, making the world safer and healthier, and deepening the global reputation of his alma mater. During the Class of 2021's time at Johns Hopkins, Bloomberg made a historic $1.8 billion gift entirely for financial aid, allowing the university to permanently offer need-blind admissions and eliminate the need for student loans. Approximately 60% of the graduating class received financial aid supported by Bloomberg Philanthropies.

Bloomberg's innovations in business, government, and philanthropy have made him a global leader on climate change, public health, education, and other critical issues facing America and the world. The founder of Bloomberg LP and Bloomberg Philanthropies, Bloomberg serves as World Health Organization Global Ambassador for Noncommunicable Diseases and Injuries, and the United Nations Secretary-General's Special Envoy for Climate Ambition and Solutions.

Born in Boston and raised in Medford, Massachusetts, he earned a BS in electrical engineering from Johns Hopkins University, graduating in 1964. His first donation to the university, $5, came in 1965. Since then, Bloomberg has become the largest donor in the 145-year history of the Johns Hopkins institutions with his total giving to the university now exceeding $3.5 billion. 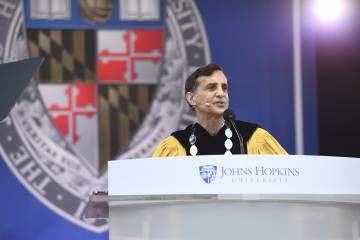 'You are our beacons. Lead us toward a healed world.'

Published May 27, 2021
The upheaval that has marked the past year presents us with a 'rare opportunity for lasting, nontrivial, meaningful change,' President Daniels tells graduates 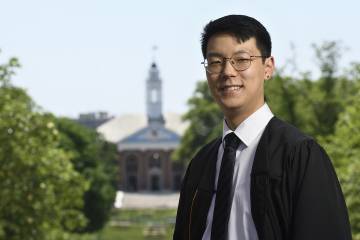 Hopkins grads have 'capacity to discover and reveal truths'

Published May 27, 2021 Video
William Cho challenges his classmates to respond to disinformation and injustice with wisdom, moral clarity, and a commitment to upholding the truth 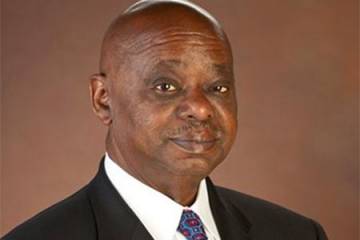 Published May 27, 2021
Bates, a 1958 Johns Hopkins graduate, was the first Black student in the university's School of Arts and Sciences