The organization distributed more than $100,000 in grants and funding to eight student startups

FastForward U has announced the winners of its inaugural Innovation & Entrepreneurship Challenge, which awarded more than $100,000 to eight student startups.

The I&E Challenge gave students a streamlined process to apply for multiple funding opportunities that enable them to make progress on their ventures over the summer without having to balance a job or internship. All four awards include money to pay for room and board, co-working space at FastForward U, and access to mentors and advisers. 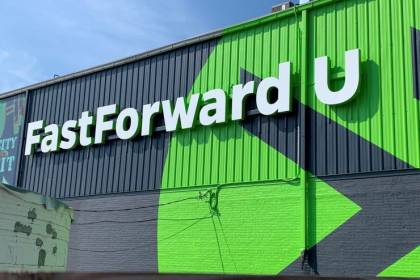 Image caption: Winners will be given access to co-working spaces in FastForward U's Remington Makerspace and offices.

Based on the application scores, 17 finalists were selected to give live, virtual pitches to a panel of judges from Johns Hopkins Technology Ventures.

"I am extremely impressed with the imagination and accomplishments of our student teams," said Josh Ambrose, director of student ventures for FastForward U. "I'm grateful for the Hopkins community that continues to urge them on to greatness—not just the incredibly hardworking team at FastForward U and JHTV, but also our alums who are eager to give back and help create the ecosystem that will cement our position as leaders in Baltimore and beyond."

The Bisciotti Foundation Prize for Student Entrepreneurship is a nondilutive grant (meaning the entrepreneurs do not have to give up any equity in the company) designed to help student startups scale their businesses as they graduate from FastForward U student entrepreneurship programs on campus. Recipients have received grant or venture funding or started generating revenue and are planning to stay in Baltimore. Ventures are led by at least one current Johns Hopkins student (undergraduate, graduate, or postdoc) or someone who graduated between 2018 and 2020.

The first-place grant of $30,000 went to EcoMap, which leverages technology to build custom platforms and datasets to support entrepreneurial communities across the globe. Founder and CEO Pava LaPere, a 2019 graduate of the Krieger School of Arts & Sciences, was a freshman when she founded TCO Labs, a nonprofit that fosters entrepreneurship on the Homewood campus while encouraging students to get involved in the local innovation ecosystem.

The second-place grant of $20,000 went to Spotlight News, which allows users to create a personalized newsfeed from more than 200 local and college newspapers. CEO and founder Tamer Morsy received a master's degree in data science from Johns Hopkins and was named to Forbes' "30 Under 30" list in media for 2020.

The Summer MedTech Award gives $10,000 to one Johns Hopkins student-led startup working on medical technology to make significant progress over the summer. It is funded by Karthik Seshan, the CEO of NeuroAlert, who earned a bachelor's degree in electrical engineering in 2010 and a master's in engineering management in 2011 at the Whiting School of Engineering. Seshan also provides mentorship on taking the next steps to market. This year's winner is Optosurgical, which specializes in the research and development of intraoperative imaging devices to aid operating surgeons. Optosurgical's team lead is Eugene Oh.

The Thalheimer Graduate Student Award supports Johns Hopkins graduate students aiming to solve major challenges through entrepreneurship. Each of this year's four recipients received $10,000. They are:

The Summer Undergraduate Entrepreneurship Award supports one undergraduate-level startup annually with grant funding of $10,000. This year's recipient is Graff Golf, which developed a smart golf ball and analytics platform that enables golfers to track detailed analytics of their swing and then improve it using custom practice programs. Graff Golf's team lead is Aaron Shapiro.