An expert in immunometabolism, he will hold appointments in the departments of Oncology and Molecular Microbiology and Immunology, as well as the Bloomberg~Kimmel Institute for Cancer Immunotherapy

It's not every animal-loving child's destiny to become one of the world's leading scholars of biology and the immune system. But for scientist Ed Pearce, that lifelong love led him to a university course on zoology, where he became fascinated by one of the nature's least appealing creatures: parasitic worms. From that moment, Pearce set out on a path of research that would lead to important discoveries about complex functions of the human immune system.

"It's certainly not the case that I planned my career this way," Pearce says with a laugh. "I was just fortunate enough to be able to pursue the kind of experimental work that I enjoy."

Now, Pearce will bring his research into immunology to Johns Hopkins, where he has been named the Bloomberg Distinguished Professor of Immunobiology. 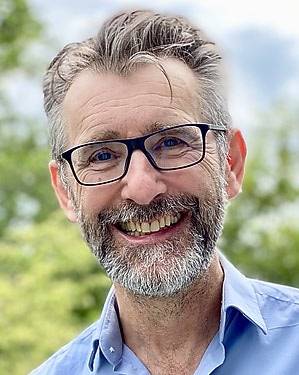 Pearce's career began with an interest in how parasitic helminths cause type 2 immunity in humans, a complicated form of immune response that shares characteristics with the immune response that causes allergies and asthma. Type 2 immunity confers certain biological benefits, such as immunity against helminths and help in wound healing, but it can also cause tissue fibrosis or contribute to tumor progression.

It's this latter phenomenon that has most recently captured Pearce's attention. He has expanded his research to include examinations of how cellular metabolism—the process by which cells synthesize or break down molecules in order to function—plays a role in activating the innate immune system, a powerful network of cells and tissues that is the body's primary defense against cancer cells and invading pathogens. He has discovered that immune cell activation is highly dependent upon a process called metabolic reprogramming, a process Pearce is still investigating in order to better understand if the immune system can be leveraged to protect against infection or cancer.

At Johns Hopkins, Pearce plans to extend his program to partner with clinicians to study how immune cells and other tissue cells become trapped within growing tumors, and whether those cells can be manipulated metabolically to prevent tumor growth from the inside. He is also interested in researching what happens when oncology patients given immunotherapy—a form of treatment that seeks to activate the body's own immune system to fight cancer—develop autoimmune disorders.

To Pearce, this line of cancer research is a natural extension of his study of parasites and the immune responses they evoke—and evade.

"Conceptually, one can think of a tumor growing in an immunologically competent individual, under the radar of the immune response," Pearce says. "There are similarities in that to understanding how certain types of infection are able to survive in an individual chronically, when that individual has an immune response that seems able to detect that infection but is not able to clear it. I saw those parallels and that's how this broader interest developed.

"In both cases," Pearce continues, "there's something that's growing and taking up resources within you, and you have an immune response that can detect what's going on, but without help is incapable of doing anything about it."

As a Bloomberg Distinguished Professor, Pearce will hold appointments in the Department of Oncology at the Johns Hopkins School of Medicine and in the Department of Molecular Microbiology and Immunology in the Bloomberg School of Public Health. He will also be appointed to the Bloomberg~Kimmel Institute for Cancer Immunotherapy; he is only the second BDP to hold an appointment there.

"Understanding the immune system—its function, the way it becomes activated, and the avenues by which it becomes corrupted or compromised—is essential to understanding human health..."
Ellen MacKenzie
Dean, Bloomberg School of Public Health

"Understanding the immune system—its function, the way it becomes activated, and the avenues by which it becomes corrupted or compromised—is essential to understanding human health, whether for protecting individuals from helminth parasite infection, autoimmune disorders, or cancer," says Ellen MacKenzie, dean of the Bloomberg School of Public Health. "Ed Pearce is a leading scholar whose work unites these frontiers, and we're very excited to welcome him to the Bloomberg School."

Paul Rothman, dean of the medical faculty and CEO of Johns Hopkins Medicine, says he is thrilled Pearce will be continuing his promising research at Johns Hopkins.

"Over his career, Ed has shown an impressive ability to combine disciplines in unexpected and innovative ways," Rothman says. "His research has yielded important insights into the molecular biology of the human immune system–how it activates, and how it can be evaded and reprogrammed. These discoveries have crucial implications for cancer and other diseases."

Pearce comes to Johns Hopkins from the Max Planck Institute of Immunobiology and Epigenetics and the University of Freiburg. A native of the United Kingdom, he studied zoology at the University of Wales and received his PhD in immunoparasitology from the National Institute for Medical Research, Mill Hill. He conducted his postdoctoral research under Alan Sher at the U.S. National Institutes of Health, where he investigated type 2 immunity. He has been an independent researcher since 1990 and has held faculty positions at Cornell University, the University of Pennsylvania, the Trudeau Institute, and the Washington University School of Medicine in St. Louis.

As a Bloomberg Distinguished Professor, Pearce joins an interdisciplinary cohort of scholars working to address major world problems and teach the next generation. The program is backed by a gift from Michael R. Bloomberg, a Johns Hopkins alumnus, founder of Bloomberg LP and Bloomberg Philanthropies, World Health Organization Global Ambassador for Noncommunicable Diseases, and 108th mayor of New York City.