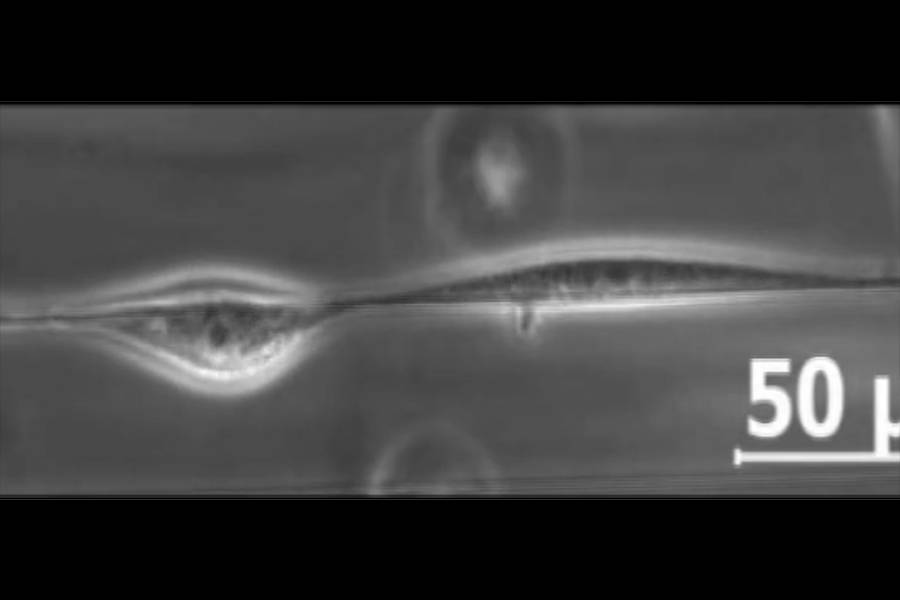 By offering cells a microscopic "tightrope," Johns Hopkins University and Virginia Tech scientists have discovered a new and surprising form of cellular movement.

Normally when cells crawling in an organism come into contact, they reverse and move randomly away from the other cell. But when nanofiber "tightropes" coated with proteins were suspended in a three-dimensional medium for cells to explore, cells either walked past each other to avoid a collision or formed a train moving together along the length of the nanofiber.

The option of walking the line made the typically erratically moving cells much more systemic and predictable, the team found. This new understanding of cellular movement helps explain why some drugs work differently in tests within petri dishes than they do in humans or animals.

The findings are published in the Proceedings of the National Academy of Sciences.

To observe cells in motion, the research team created an artificial three-dimensional mesh environment in which they suspended a tiny fiber, just 500 nanometers wide. They seeded mouse cells into the environment and waited one hour for the cells to latch onto the fiber. Using time-lapse photography executed in 12- and 24-hour intervals, the team was able to observe the cells move on and around the improvised tightrope.

The research team found that cell collisions in the three-dimensional mesh were entirely different than those on a flat surface. Instead of moving away from one another, cells sharing a tightrope, with nowhere to go, tended to walk past one another.

But a human or animal body is not made of just one fiber. To investigate how cells would behave in more of a native environment, the team introduced a second, parallel fiber. Now instead of moving past one another, cells stayed together, spontaneously forming a cell train moving in the same direction.

The team was able to recreate these behaviors with a simple model that assumed cells crawled along the fibers and reoriented when they came in contact with another cell's front.

"What surprised us was that we got a huge, dramatic change from a small change in the cell's environment—moving from one fiber to two," said co-corresponding author Brian Camley, an assistant professor in Johns Hopkins departments of Physics & Astronomy and Biophysics. "Instead of changing our view about the underlying biology, this shows how physical changes in the cell's environment can alter cell interactions."

The study underscores the importance of integrating environment into future studies of cell interaction, Camley said. The team next plans to study the physical and molecular underpinnings of cell motion on nanofibers.

"Scientists often want to figure out how drugs can alter cell interactions," said Camley. "It's important to study these in as natural an environment as possible, because environment plays a huge role."