The Johns Hopkins Center for American Indian Health has selected Victoria O'Keefe to a five-year faculty leadership chair in Native American health at the Bloomberg School of Public Health. 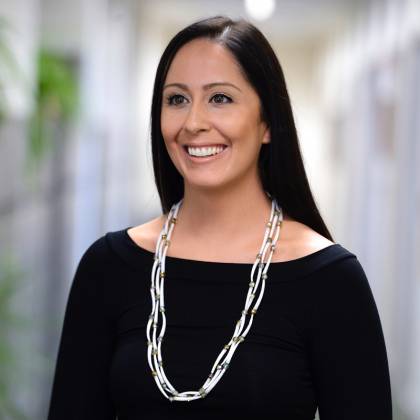 O'Keefe, a psychologist who develops, implements, and evaluates culturally-driven behavioral health interventions in partnership with Native American communities, has been named the first holder of the Santosham Chair in Native American Health, named for the Center's founding director Mathuram Santosham.

A member of the Cherokee and Seminole Nations of Oklahoma, O'Keefe was appointed an assistant professor in the Department of International Health at the Bloomberg School in 2016, becoming Johns Hopkins University's first-ever tenure track faculty member of Native American heritage. The chair provides permanent support for Native American research leadership at the Center, giving faculty the flexibility to create culturally competent innovations that leverage tribal sovereignty and build upon community strengths.

"I can't think of anyone who better embodies the vision of the Santosham Chair," said Allison Barlow, director of the Center for American Indian Health and a senior scientist in International Health at the Bloomberg School. "The chair honors Dr. Santosham's pioneering career and his work to save and improve Native American children's lives through discovering local, scalable solutions in partnership with tribal communities."

O'Keefe obtained her undergraduate degree in psychology, then completed a clinical psychology doctoral program at Oklahoma State University, where she worked in a laboratory for the study of suicide risk and resilience and was awarded the Ford Foundation Predoctoral Fellowship. Indigenous suicide prevention has been a focus throughout her studies.

"I'm thrilled to announce this new chair, endowed by a group of generous supporters, which recognizes the extraordinary contributions of Dr. Santosham," said Ellen MacKenzie, dean of the Bloomberg School. "Dr. O'Keefe's innovative work with Native communities focuses on an incredibly important public health issue—youth suicide. I'm excited about the significant contributions her research is producing through empirically supported cultural- and strengths-based approaches."

O'Keefe's leadership has contributed important mental health resources to the Center's COVID-19 response, including a children's book called Our Smallest Warriors, Our Strongest Medicine: Overcoming COVID-19. The book, which has reached tens of thousands of Indigenous families, promotes communal efficacy, strength, and hope in the face of the pandemic. In addition, O'Keefe is working with colleagues to develop an Indigenous version of Psychological First Aid for frontline workers addressing COVID-19 in tribal communities. In the past year, she also led the production of a new strengths-based guide for tribal leaders to prevent youth suicide, called "Culture Forward," which will be disseminated nationwide. Her newest work is focused on advancing an Elders' Resiliency curriculum to promote youth wellness and prevent suicide that was designed by the White Mountain Apache community.

Founded in 1991 and based in the Department of International Health at the Johns Hopkins Bloomberg School of Public Health, the Center supports public health interventions designed for and by Native peoples. The Center has offices in tribal communities across Arizona and New Mexico as well as a Great Lakes Hub serving tribes in Minnesota, Wisconsin, and along the shared border with Canada. The Center also supports public health interventions in more than 140 tribal communities in 21 states. These partnerships have achieved landmark public health breakthroughs credited with saving millions of children's lives in the U.S. and worldwide.

Santosham was born in Vellore, India, earned his MBBS degree from the Jawaharlal Institute of Post Graduate Medical Education and Research in Pondicherry, India, and later obtained his Board Certification in Pediatrics and an MPH degree from the Bloomberg School where he is a professor in the Department of International Health.

In 1991, Santosham founded the Center to promote physical, behavioral and mental health, and advance education among Native Americans, and share these solutions with the poorest communities around the world. The Center's earliest work focused on demonstrating the efficacy of oral rehydration solution to reduce the high rate of childhood deaths from diarrhea among Navajo and Apache children to virtually zero. ORS is now credited with saving over 50 million lives worldwide. Santosham, winner of numerous honors including the 2017 Prince Mahidol Award and CDC Foundation's 2014 Fries Prize for Improving Health, serves as director emeritus of the Center, continuing robust support for tribal communities, advising on pandemic response efforts, and advocating nationally to combat persistent health disparities.

The Center launched a comprehensive public health response to COVID-19 that includes life-saving research such as with convalescent plasma; disease prevention and mitigation with contact tracing systems; widespread distribution of protective gear, prevention information, and emergency food, water and household supplies; and interventions that address mental health-related consequences from the pandemic. 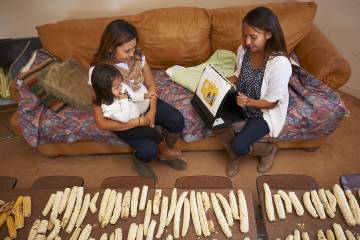 Published Nov 16, 2020
Lessons on healthy feeding practices delivered by Native American home visitors put Navajo infants on a healthier growth trajectory, lowering their risks for obesity, according to a study from researchers at the Johns Hopkins Center for American Indian Health at the Bloomberg School of Public Health