Speaker series will feature a lineup of artists, activists, and journalists in its 24th year 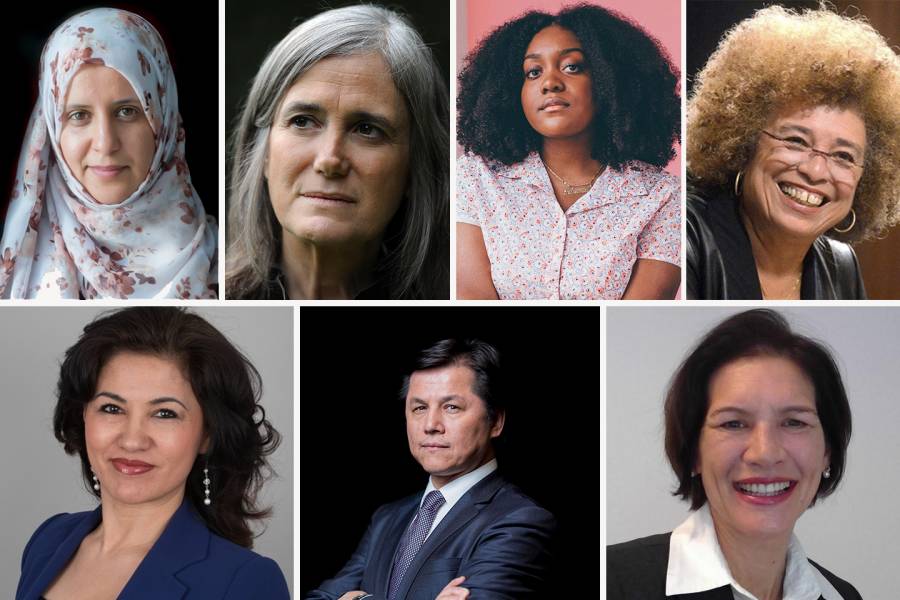 Image caption: The speakers for this year's Foreign Affairs Symposium events are (top row, from left) Radhya Al-Mutawakel, Amy Goodman, Noname, Angela Davis, and experts who will speak on a panel about the global response to the Uyghur Crisis (bottom row, from left): Rushan Abbas, Nury Turkel, and Louisa Greve.

The Johns Hopkins Foreign Affairs Symposium returns this spring with a diverse lineup of artists, activists and journalists committed to fighting for a greater standard of justice.

The series, themed "Where Do We Go From Here" is the 24th symposium put on by the group.

"As we enter our second year of the COVID-19 pandemic, the international community continues to grapple with its devastating impact as well as the historic and ongoing injustices it has exposed," wrote series organizers in their release announcing the lineup. "'Where Do We Go From Here?' highlights those activists and trailblazers working to focus our collective attention on these multi-layered crises."

Events will be held via Zoom, and are free and open to the public. Pre-registration is not required, but encouraged at www.jhufas.org/rsvp.

Radhya Al-Mutawakel is a Yemeni human rights defender and the co-founder of the Mwatana Organization for Human Rights, an independent organization that documents human rights violations in Yemen and provides legal support to assist victims. Al-Mutawakel, named one of Time Magazine's "100 Most Influential People" in 2019, has worked in the field of human rights for over twenty years, beginning with the National Commission for Women in Yemen and the Yemeni Organization for the Defense of Rights and Freedoms.

Amy Goodman is an investigative journalist and reporter serving as the main host of Democracy Now!, an independent internet news program that has amassed widespread acclaim for its focus on social activism and its coverage and critique against corporate influence and American foreign policy. She is the author of six books and has received numerous accolades for her work, including the Robert F. Kennedy Prize for International Reporting, the George Polk Award, the Gandhi Peace Award, and the I.F. Stone Medal for Journalistic Independence.

Fatimah Nyeema Warner, known professionally as Noname, is a rapper and poet whose work often explores topics of race, politics, and identity. Her debut mixtape and album, Telefone and Room 25, were released to critical acclaim, and she has frequently appeared on tracks with Chance the Rapper, Saba, and other prominent artists. She has also created the Noname Book Club to encourage support for local bookstores and to highlight the work of people of color.

Panel on the Global Response to the Uyghur Crisis

The Panel on the Global Response to the Uyghur Crisis will feature of Nury Turkel, Rushan Abbas, and Louisa Greve. Nury Turkel is a Uyghur-American attorney serving as president of the Uyghur American Association, chairman of the board for the Uyghur Human Rights Project, and a commissioner on the United States Commission on International Religious Freedom, appointed to the role by Speaker of the House Nancy Pelosi. Rushan Abbas is a Uyghur-American activist who is the founder and executive director of the nonprofit Campaign for Uyghurs and who is responsible for leading the global 'One Voice, One Step' march. Louisa Greve is the director of global advocacy for the Uyghur Human Rights Project, serving as an expert on human rights issues and the nonprofit sector.

Angela Yvonne Davis is an academic, author, and activist whose work touches on issues of race, prison abolition, feminism, and class. Over the years, she has been affiliated with the Communist Party USA, the Black Panther Party, and the Committees of Correspondence for Democracy and Socialism, which she was a founding member of. She has been awarded the Lenin Peace Prize for her work, inducted into the National Women's Hall of Fame, received honorary doctorates from institutions around the world, and continues to be involved in political activism to this day. 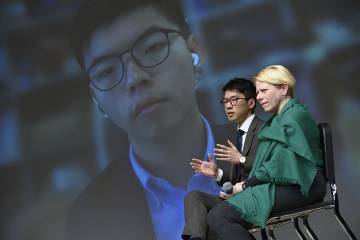 Published Feb 21, 2020
Foreign Affairs Symposium hosts Joshua Wong and Nathan Law, two of the founders of the 2014 Umbrella Protests, for a conversation on activism and political autonomy