Inside the career of longtime engineering professor James West

West, who celebrates his 90th birthday today, remains as passionate about his work as he was when his career began nearly 70 years ago 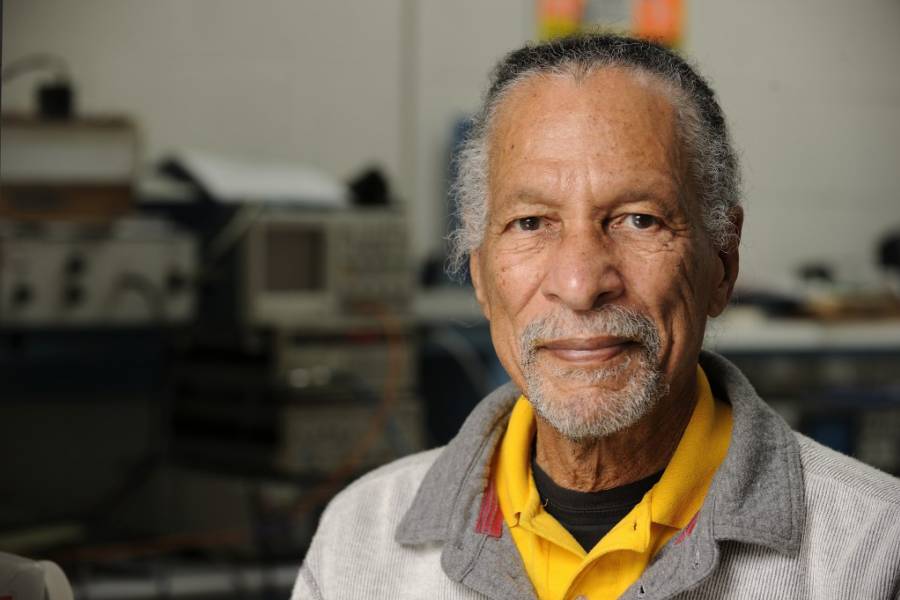 James West has always viewed age as just a number that does not have a correlation to his ability to work. At 90, he not only oversees a lab of students conducting research, but is just as excited about conducting research as he was at the outset of his career almost 70 years ago. And not even a global pandemic can deter his passion for his work.

"The number one thing I want to do after the pandemic is get back in the lab," said West, who celebrates his milestone birthday today. "I can provide support remotely, but being in the lab in person is very important for research. Students need that oversight, and I still want to see our experiments at work."

West began his career at Bell Labs, where he, along with his collaborator Gerhard Sessler, in 1962 created the foil electret microphone, which is widely considered to have revolutionized the telephone and recording industries. The impact of that work is still felt today, with more than 90% of more than two billion microphones produced annually still using the principles that creation. 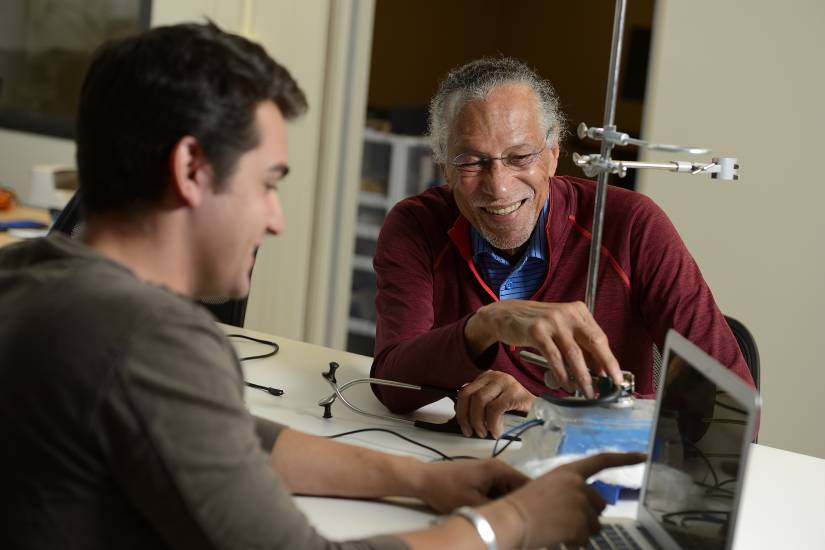 Image caption: West and a student, pictured in 2016, work on designs for a smart stethoscope that can cancel out surrounding noises and make predictive diagnoses.

West and Sessler, who also turns 90 this month, have maintained a close relationship for nearly 60 years, despite living on different continents. (Sessler currently serves as professor emeritus for the Department of Electrical Engineering and Information Technology at Technische Universität Darmstadt in his native Germany). Sessler has collaborated with a variety of people throughout his career, but says that West will always stand out as extraordinary.

"Right from the beginning, collaboration with Jim was easy because he is a very relaxed person but also has a charismatic personality. This, combined with his curiosity and smart ideas, makes collaboration with him a highly rewarding experience," Sessler said. "What you notice first when talking with Jim is his curiosity and his enthusiasm. In every conversation, he comes up with new visions and he is full of ideas on how to implement these visions. You immediately realize that he really enjoys what he does. There is nothing like a brainstorming session with Jim!"

"Nature is the best engineer and scientist, and it has a lot of secrets that we don't fully understand. Working to figure out those secrets motivate me."
James West

Throughout his career, West has received a variety of honors, including election to the National Academy of Engineering and the National Inventors Hall of Fame, as well as winning the National Medal of Technology and Innovation and the Franklin Institute's Benjamin Franklin Medal in Electrical Engineering. He also has more than 250 patents to his name.

When West left Bell Labs in 2001, he was attracted to Johns Hopkins by its collaborative research culture, which encouraged multidisciplinary approaches to solving problems.

"I work with people in chemistry, materials, and mechanical engineering," said West, who is a professor in the Whiting School of Engineering's Department of Electrical and Computer Engineering. "Promoting collaboration is one of the reasons Hopkins is alone among other universities in terms of appreciating research."

Joining Hopkins also allowed West to more easily pursue one of his main passions: mentoring and supporting young engineers, particularly those from underrepresented racial backgrounds and women. West has also made it a point to recruit not only graduate students to join his lab, but undergraduates, too, in the hopes of helping younger students develop a love for STEM disciplines.

"If it weren't for Dr. West replying to my first cold email to him back in 2014 in 20 minutes, and his unrelenting confidence in and support of me since, I would not have been able to have as fulfilling of an academic career," Eisape said. "The sheer magnitude of the support that Dr. West throws behind each of his students is almost overwhelming. Even when you think that you can't do something, Dr. West is there as completely unshakable pillar of confidence in his students and their abilities."

West feels it is his responsibility to continue to contribute to the advancement of science—whether it is through his own research, or mentoring students—as long as he can. He does not see himself stepping away from work any time soon.

"My motivation is quite simple: To continue to unlock the secrets of nature. Nature is the best engineer and scientist, and it has a lot of secrets that we don't fully understand. Working to figure out those secrets motivate me," West said. "When I speak to students who are interested in STEM, I try to emphasize where I get my passion from, which is simply that the work is a lot of fun. There is nothing I can think of that is more rewarding or enjoyable than understanding how nature behaves."