As scientists increasingly use nanomaterials to address environmental challenges like air pollution and fertilizer runoff, they face the possibility that their technologies, for which they have no long-term data, could cause unintended consequences.

Chemists Howard Fairbrother and Rigoberto Hernandez, both professors in the Department of Chemistry at the Krieger School of Arts and Sciences, are researching ways to predict what some of those consequences might be, as well as what structures and materials will optimize the technology's positive impacts.

"We want to develop design rules so that when we make a design to solve yesterday's problems, we don't create new ones for tomorrow," says Hernandez, who is the Gompf Family Professor of Chemistry.

For the last five years, their efforts have been supported by a National Science Foundation grant through the Division of Chemistry targeting sustainable nanotechnology design, which was renewed this month for another five years. "The NSF Centers for Chemical Innovation, including the Center for Sustainable Nanotechnology, are transforming the way we do science by engaging interdisciplinary, multi-institutional teams to take on grand challenges in the field," says David Berkowitz, the NSF's Division Director of Chemistry. 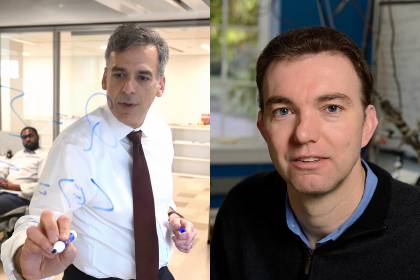 The $20 million renewal supports research teams at 12 institutions that together make up the NSF Center for Sustainable Nanotechnology. Through collaboration and complementary knowledge and skills, the researchers work toward understanding, at a fundamental level, how nanoparticles behave and interact with microorganisms and other components of the natural environment, and using that knowledge to design sustainable new nanotechnologies or improve existing ones. Hernandez's and Fairbrother's labs will each receive approximately $1 million over the five-year span.

Fairbrother's lab works with several carbon-based nanomaterials. Carbon dots, a fluorescent nanoparticle, emit light at certain wavelengths when excited. Made of anything from tea leaves to plastic bags, they could theoretically replace some toxic and expensive components in high-definition TVs, for example. However, one limitation is that they often don't fluoresce long enough to be functional. Fairbrother's team has already discovered that the dots lose fluorescence in sunlight, and is now using that knowledge to figure out what happens to the dots during that process in hopes of discovering how to keep them active.

Another project aims to reduce the nutrient runoff often caused by the agricultural use of fertilizer, and which can cause oxygen-choking algae blooms in rivers and lakes. By embedding nanoparticles containing the major nutrient phosphorus into biodegradable polymers and then placing them in the soil to slowly release the mineral, the team has grown tomato plants as effectively as those produced with conventional fertilizer, but with an 80-90% reduction in runoff.

"Ultimately, we want to make particles that will not be toxic and will increase the viability of a cell or a plant."
Rigoberto Hernandez
Professor of Chemistry

Meanwhile, Hernandez's lab focuses on using machine learning to predict the potential effects of nanoparticles on microorganisms just by knowing their molecular-scale properties. Taking the relatively small amounts of data available on these impacts, they use computational chemistry and machine learning to link molecular structures and their associated dynamics with likely effects.

"Ultimately, we want to make particles that will not be toxic and will increase the viability of a cell or a plant," Hernandez says.

Hernandez says part of the strength of the grant lies in the risks it allows researchers to take with uncharted territory—risks he had already begun exploring with resources made possible by his named professorship and his department colleagues and facilities. Another crucial part is the diversity of faculty, postdoctoral fellows, and students involved in the center's collaborative research.

"You need to have a breadth of knowledge and experiences and metaphors, and that's been key to the success of our NSF center," Hernandez says.

The center also offers those students an opportunity not often found in a typical PhD program, Fairbrother adds. Its lab exchange program enables each student to spend one week every year in another institution's lab, learning how other groups and facilities work.

"They're exposed to different ways to do science," Fairbrother says.