Even in the midst of the COVID-19 crisis, we should be planning ahead to avert threats of the next pandemic, says Tom Inglesby, director of the Center for Health Security at Johns Hopkins.

"We need to make it so that pandemics lose their power to do catastrophic harm in the U.S. and in the world, whatever the form of biological risk, so that we're never in this kind of position again," Inglesby said Tuesday during a Johns Hopkins forum exploring what to expect in a post-COVID-19 world.

The two-day virtual forum, which concluded Wednesday, explored the tumultuous state of world affairs today as well as the global challenges and opportunities ahead. The Henry A. Kissinger Center for Global Affairs, within JHU's School of Advanced International Studies, hosted the event, which featured an array of experts from Johns Hopkins and elsewhere specializing in international relations, foreign policy, public health, food security, and other disciplines. Their conservations will form the basis for a collection of essays due out this fall, COVID-19 and World Order: The Future of Conflict, Competition, and Cooperation. 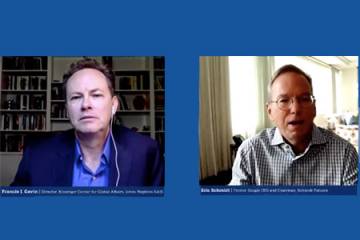 View panel discussions and keynote remarks from this two-day virtual conference hosted by the Henry A. Kissinger Center for Global Affairs

In opening remarks Tuesday, Johns Hopkins University president Ronald J. Daniels pointed to global threats that were rising even before the pandemic began.

"We're now in a world whose aims and values no longer necessarily align with those of liberal democracy and where authoritarianism is gaining," he said, pointing to economic inequality as the fuel for populist resentment, nationalism, and "sweeping distrust of institutions."

At the same time, "massive shifts in technology and communication have enabled misinformation to travel at six times the speed of actual facts, and heightened avenues for surveillance," Daniels said. "The COVID-19 pandemic has only accelerating these trend lines."

In the forum's keynote address, former Google CEO and chairman Eric Schmidt identified technology leadership as a key platform for the U.S. and encouraged a "rethink" of the nation's relationship with China.

"China is a peer of the United States [with] aspirations of world power and world influence on par of what we have all grown up with in the United States. We have our biggest strategic adversary, which is also our biggest partner," Schmidt said, suggesting that a resolution involves "both competition and cooperation, which in my industry is typically called 'co-opetition.'"

The cost of "decoupling" with China would be very high, he warned: "Imagine a situation, for example, where there were two Internets. A Western Internet, roughly speaking what we have today; and a different one [in terms of] communications and skills and trading. How much would that set back health care, biology, scientific research? How much would it increase the danger of a miscalculation that could lead to disastrous military conflict?"

In a panel addressing the future of health governance, Lainie Rutkow, a professor of health policy and management at the Johns Hopkins Bloomberg School of Public Health and a senior adviser in JHU's president's office, addressed the need for a "re-envisioned" World Health Organization. She pointed to problems including its lack of enforcement power and a funding stream that is 80% voluntary contributions from countries, philanthropic organizations, and the private sector.

But Rutkow criticized U.S. threats to withhold funding from WHO. "It would be a mistake to forsake it. No country can tackle a pandemic on its own; and a supernational body is needed to play a coordinating role," she said. "But WHO desperately needs a new funding model that allows it to transcend country-level politics and actually address the world's most pressing public health problems."

During that same panel discussion, Inglesby outlined a path forward for the United States, with the first goal of building "an extremely capable U.S. pandemic prevention response program that helps us be able to manage on our own two feet," featuring private/public partnerships and a strong manufacturing base for vaccine production and medical equipment. Secondly, he said, the U.S. should "create a multinational partnership with governments, international organizations, and the private sector" to help the global community prepare for pandemics.

"With enough planning and investment, science and partnership, we can radically reduce the power of pandemics," Inglesby said, identifying that goal as a "key national and international project in the time ahead." 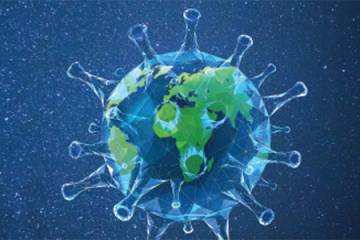 Published June 29, 2020
Kissinger Center for Global Affairs convenes experts to discuss what the world will look like in the wake of the coronavirus pandemic