Image caption: Peter Milliman led Cornell to a 28-10 record in two-plus seasons with the Big Red, including a 5-0 start to the 2020 season before it was canceled.

Milliman took over as the head coach at Cornell in 2018 and amassed a record of 28-10 during his time there, including an 8-4 mark in Ivy League play. The Big Red went 13-5 in 2018, 10-5 in 2019, and were 5-0 and ranked No. 2 in the nation when the 2020 season was canceled. Cornell advanced to the NCAA quarterfinals in Milliman's first season in 2018. The Big Red also won the Ivy League tournament title that year, defeating top-ranked and eventual national champion Yale in the championship game.

Cornell ranked second nationally in scoring offense at more than 18 goals per game when the 2020 season ended and, under Milliman's guidance, was among the nation's top scoring team in 2018 and 2019 as well.

"The history of Johns Hopkins lacrosse is one of achievement by our student-athletes on and off Homewood Field," Johns Hopkins University President Ronald J. Daniels said. "With the arrival of Pete Milliman as head coach, we launch a new chapter that builds on the foundation of this exceptional program and the excellence and drive of Blue Jays past and present."

Milliman, the 23rd head coach in Hopkins history, succeeds Dave Pietramala, who coached the Blue Jays from 2001 to 2020 and amassed a program record 207 wins during his two-decade tenure.

"It is with great pride and excitement that we welcome Pete and his family to Johns Hopkins," said Jennifer Baker, JHU's director of athletics. "Throughout the process, Pete demonstrated a passion for student-athletes and their holistic development and a vision that aligns with the goals we have established for our men's lacrosse program. In addition, his proven record of success at the national level and a strong track record of player development made him the ideal candidate to become the next men's lacrosse coach at Johns Hopkins."

Milliman was a three-time All-American at Gettysburg and helped the Bullets to back-to-back appearances in the NCAA Division III championship game during his career, in 2001 and 2002. He finished his career at Gettysburg ranked second in school history in points (232), fifth in goals (138), and third in assists. After completing his career at Gettysburg, he went on to play four seasons for the Rochester Rattlers in Major League Lacrosse. The Rattlers won the MLL title during his last season with the team in 2008.

"With the arrival of Pete Milliman as head coach, we launch a new chapter that builds on the foundation of this exceptional program and the excellence and drive of Blue Jays past and present."
Ronald J. Daniels
President, Johns Hopkins University

Milliman arrived at Cornell in 2014 as an assistant coach, serving as defensive coordinator early in his tenure, but seamlessly transitioning to the offensive side and helping to turn the Big Red into one of the most prolific scoring teams in the nation. Before landing at Cornell, Milliman had successful assistant coaching stops at RIT (2006, 2008), Siena (2007), and Princeton (2013).

Milliman had his first head coaching stint from 2009-12 at Division II Pfeiffer. There, he led the Falcons to a pair of appearances in the Conference Carolinas title game, in 2011 and 2012, and was twice named the conference coach of the year (2009, 2011).

A native of Rochester, New York, Milliman and his wife, Megan, have two daughters, Reese and Lake.

"I want to thank Jennifer Baker and the search committee for the opportunity to serve as the men's lacrosse coach at Johns Hopkins," Milliman said. "This program has a long-standing tradition of success, and I will look to build upon the legacy of that success both on and off the field. Serving this program is an incredible honor, and I am looking forward to getting to work right away." 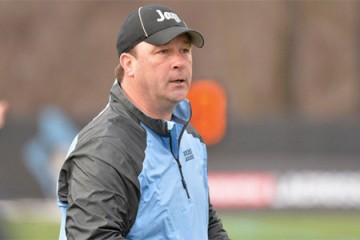 Published April 14, 2020
The winningest coach in program history, he totaled 207 wins and delivered two NCAA titles in two decades as head coach at his alma mater