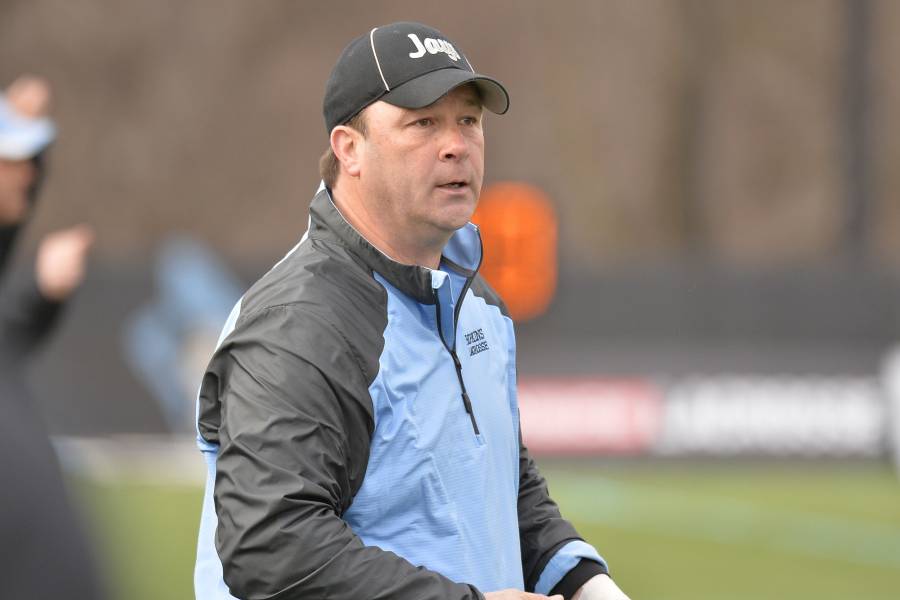 Image caption: In 20 seasons as head coach, Dave Pietramala led Hopkins to 18 NCAA tournament appearance and seven final fours. His 207 wins are the most in the program's history.

Dave Pietramala, who has led the Johns Hopkins University men's lacrosse program for the past two decades and guided the Blue Jays to two national championships, will not return as head coach next season, the university announced today.

Hopkins and Pietramala mutually agreed to part ways, Director of Athletics Jennifer S. Baker said in a news release, as Johns Hopkins looks to move the program in a different direction. A national search for a new head coach will begin immediately.

"We are truly thankful for his tireless efforts and the leadership he provided to the young men who represented Johns Hopkins at the highest level on and off the field."
Jennifer Baker
Johns Hopkins director of athletics

"For two decades, Dave Pietramala guided our men's lacrosse program, and we are truly thankful for his tireless efforts and the leadership he provided to the young men who represented Johns Hopkins at the highest level on and off the field," Baker said. "Very few great players have demonstrated the ability to become great coaches; Dave Pietramala has done that and his legacy as a player and coach is virtually unmatched in the world of college lacrosse. Our focus now is on the future and ensuring we identify the best person to lead our program and build on the tremendous history and tradition of Johns Hopkins lacrosse."

Pietramala departs as the winningest coach in Johns Hopkins men's lacrosse history, having compiled a record of 207-93 and 18 NCAA tournament appearances in 20 season. He guided the Blue Jays to seven final fours (most recently in 2015), four national title game appearances (2003, 2005, 2007, 2008), and two NCAA championships, in 2005 and 2007. Hopkins has captured 44 national championships overall in the program's history, including a record nine NCAA titles.

Pietramala, a three-time All-American defender during his playing days at Hopkins, also led the Blue Jays to Big Ten Tournament titles in 2015 and 2018. Johns Hopkins joined the Big Ten in 2015.

The Blue Jays were off to a 2-4 start in 2020 before the season was cut short amid escalating global concerns about the spread of COVID-19.

Earlier this year, Pietramala was named a recipient of the Tewaaraton Foundation Legends Award; the honor recognizes former players whose performance during their college years would have earned them a Tewaaraton Award as the nation's most outstanding player had the award existed when they played.