His work in computer vision, pattern recognition, and machine learning has a range of applications—including medicine 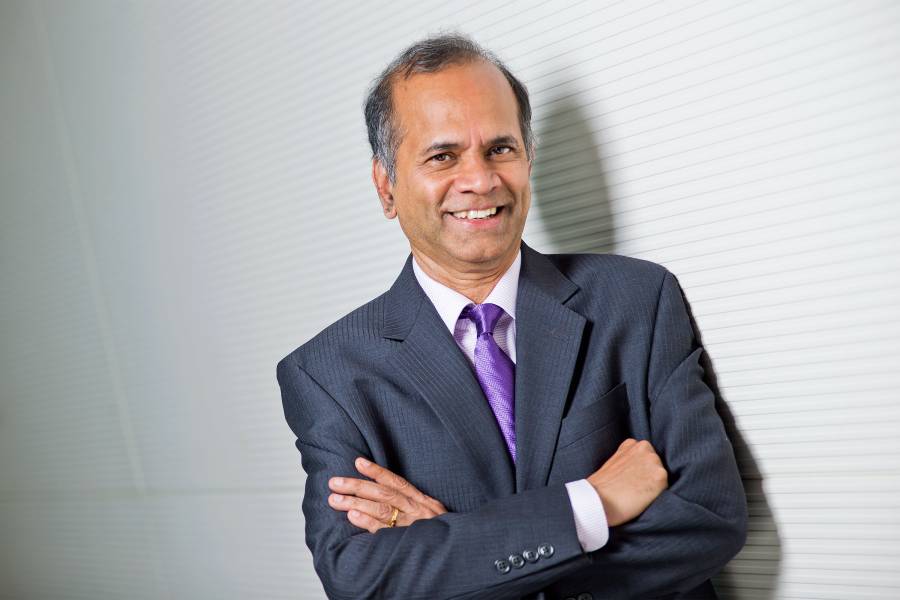 Image caption: Rama Chellapa, an expert in computer vision and machine learning, has spent the past 29 years at the University of Maryland, including lengthy stretches as chair of the Department of Electrical and Computer Engineering and director of the Center for Automation Research.

Back in the 1980s, when the study of artificial intelligence was branching out into exciting new realms, Rama Chellappa organized a national conference focused on two emerging niches: computer vision and pattern recognition. The event, he recalls, drew a modest crowd. Last year the same conference brought together more than 6,000 researchers from around the world.

"It's an exciting time to be a computer vision researcher," says Chellappa, one of the most accomplished figures working in artificial intelligence today.

The applications of his research—in essence, using data and geometry to help computer systems interpret the visual world—are vast. In recent decades, Chellappa's work in computer vision, pattern recognition, and machine learning has had an impact on areas including biometrics, smart cars, forensics, and 2D and 3D modeling of faces, objects, and terrain. Increasingly, his work in motion capturing and imaging has also pointed to promising uses in health care and medicine.

In his new role as a Bloomberg Distinguished Professor at Johns Hopkins University, Chellappa intends to expand these pursuits within both the Whiting School of Engineering and the School of Medicine. He will join Hopkins after 29 years at the University of Maryland, including lengthy stretches as chair of the Department of Electrical and Computer Engineering and director of the Center for Automation Research.

"Rama Chellappa is a truly exceptional researcher, leader, and mentor with a remarkable record of innovation in the areas of computer vision, pattern recognition, machine learning, and artificial intelligence," says Johns Hopkins University Provost Sunil Kumar. "We are excited to welcome him to the Johns Hopkins community, where he will collaborate across divisions and bring his groundbreaking research to new corners of the institution."

At Hopkins, Chellappa intends to increase his focus on medical applications for his science—inspired in part by his two children, both of whom are doctors. "I'm excited to work with the world's top clinical researchers and physicians," he says.

Says Paul Rothman, dean of the medical faculty and CEO of Johns Hopkins Medicine: "The work that Dr. Chellappa is performing in computer vision and other areas has the potential to significantly improve diagnosis and treatment for a huge number of patients spanning a wide range of diseases. We are incredibly excited for him to join our ongoing work in this area."

For the last quarter century, Chellappa's research has shaped the field of facial recognition technology—developing detailed face models based on shape, appearance, texture, and bone and muscle structure. Under a recent program called Janus, Chellappa and his team have developed a high-accuracy face recognition system that serves critical needs for federal and commercial sectors. The team has also worked on modeling facial expressions, with potential for a variety of medical applications.

Chellappa is also known as an expert in machine learning, a branch of artificial intelligence that instructs computer systems to perform tasks based on patterns and inferences. In one recent experiment, Chellappa and colleagues tested the skills of expert forensic facial examiners against the skills of machines; as it turned out, the best results came when both sides worked together.

The research, Chellappa says, "has promising implications for how machine learning algorithms can assist physicians to diagnose diseases."

Chellappa has also worked on gait analysis, which can apply to an enormous range of uses—everything from diagnosing Parkinson's disease to human identification at a distance.

Ramalingam Chellappa was born and raised in South India, near Chennai, and studied at the University of Madras and the Indian Institute of Science before setting his sights on Purdue University in Indiana, which was then building an international reputation for a branch of machine learning known as statistical pattern recognition.

Chellappa earned his doctorate in electrical engineering there, studying under prodigious mentors including Keinosuke Fukunaga, R.L. Kayshyap, and King Sun-Fu. (Some three decades later, Chellappa won the esteemed award named for Sun-Fu, from the International Association of Pattern Recognition.) His interest in biomedical engineering dates back to these years, when he designed a cardiac pacemaker as his capstone project.

During his doctoral studies he also conducted research at the University of Maryland (UMD) with Azriel Rosenfeld, one of the founding fathers of computer vision. The mentorship launched his career in this field, which trains computers to identify, classify, and understand digital images. Chellappa later joined UMD as a professor in 1991, after 10 years at the University of Southern California.

Chellappa and colleagues contributed foundational knowledge to autonomous vehicle technology in the mid-1990s with support from the Defense Advanced Research Project Agency. By analyzing data from cameras mounted on vehicles, his team developed algorithms that can detect obstacles and terrain drops and build 3D scene models.

Within his fields of expertise, Chellappa is also known for conducting groundbreaking research on image representations using Markov random fields—stochastic models of relationships—as well as theorems for 3D modeling from videos, and differential geometric methods for recognizing human actions.

In the early days of his career, when data and computing resources were sparse, Chellappa relied on artificial neural networks, or ANNs—computer models inspired by human brains.

Today, Chellappa says, artificial intelligence has become vastly more sophisticated due to troves of new data. "We have more computing power and more data available in all walks of life, from cell phone pictures and YouTube videos to multimodal data from patients," he says. "So we're able to mine data more intelligently and build AI systems to behave more and more intelligently."

Some of his current work focuses on designing robust machine learning systems that can nimbly adapt to new environments and tasks. For example, he's worked recently on detecting "deep fakes"—an emerging threat to the integrity of visual data, videos in particular. Under a new grant, Chellappa will also collaborate with mathematicians to build new models for deep learning, a subset of machine learning that maps data to decisions.

In May, Chellappa is set to receive the Jack S. Kilby Signal Processing Medal for his contributions to image and video processing, particularly face recognition. This is one of the top honors from the Institute of Electrical and Electronics Engineers (IEEE),, where Chellappa is a life fellow and previously served as editor-in-chief of journals. Among many other honors, Chellappa has also won technical achievement awards from the IEEE Computer Society and the IEEE Signal Processing Society; the latter also awarded him with its highest honor, the Society Award.

At Hopkins, Chellappa will teach and collaborate within the departments of Electrical and Computer Engineering and Biomedical Engineering. He will also contribute to MINDS, the Mathematical Institute for Data Science, and CIS, the Center for Imaging Science.

"Rama's enthusiasm about partnering with his colleagues in engineering and medicine, and the strengths he brings in areas like AI and computer vision, make him a terrific addition to the faculties of both our schools," says Ed Schlesinger, dean of the Whiting School.