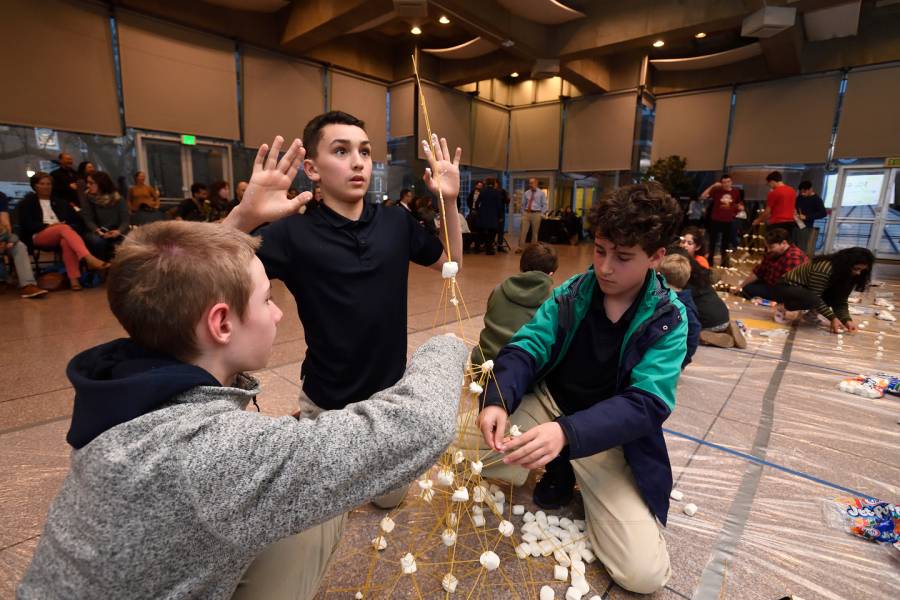 Annual Tower of Power competition, part of National Engineers Week at Johns Hopkins, challenges students from Baltimore schools to build the tallest tower out of pasta and marshmallows

If you want to build the tallest tower, it all comes down to how many tetrahedra—three-dimensional triangles—you can fit into a structure, according to the aspiring engineers who competed in the Tower of Power.

Teams from the Friends School of Baltimore, Francis Scott Key Elementary/Middle School, Our Lady of Victory School, the Summit School, and the Gilman School took part in the engineering contest last week, testing their engineering prowess against Johns Hopkins students, staff, and alumni. Held annually as part of National Engineers Week at Johns Hopkins, the Tower of Power challenges participants to engineer the tallest possible towers from uncooked pasta and marshmallows in 30 minutes. The prize? Honor, glory, and Amazon gift certificates.

Teams "Pasta LaVista" and "Team" started out strong with an Eiffel Tower-inspired strategy, building a strong square base to support a tower that became steeper and more triangular as it climbed. Students from Francis Scott Key Middle School took a boxier approach, inspired by skyscraper design. Contending that the brand of marshmallows—Jet-Puffed—wasn't ideal for tower construction, the team members pulled their marshmallows apart to let them dry out before applying them to their structure.

The team from Friends School of Baltimore, meanwhile, was all business. They came to win, and they had a plan: build a pyramid.

"It worked for the Egyptians, so it will work for us," one of the team members said as he confidently jammed a marshmallow into place on a strand of uncooked pasta.

This year's event was hosted for the first time by JHU's chapter of the Society of Women Engineers. Co-presidents Anisha Palasamudrum and Maria Sofia Ospina said they relished this opportunity to showcase the fun side of engineering.

"We wanted to expand our outreach within JHU and with the Baltimore community in general, and E-Week embodies a lot of SWE's goals," Palasamudrum said.

Added Victoria Rose, another SWE member working the event, "I think it is really important that middle school students have the opportunity to enjoy some of the most rewarding aspects of engineering like teamwork, creativity, and, hopefully, some great success. I think fun moments like these are small but really important in guiding students to eventually pursue engineering."

By the end, the Friends School of Baltimore proved to have the winning strategy, coming in first with a tower that measured 67 inches. "Team" took second place with a 52-inch-tall structure, while a team formed by staff members from the Whiting School's Office of the Dean took third with a pyramid measuring in at 38 inches.

SWE had one final lesson to impart at the end of the event.

"It's important to focus on what lessons we took away from our failures as well as our successes, so can anyone tell me what they learned tonight?" Palasamudrum asked after the winners had been announced.

Several hands shot up—all with a different takeaway. Spend more time on the base; don't try to go for height too fast; and perhaps most importantly—jumbo Jet-Puffed marshmallows are less than ideal building tools. 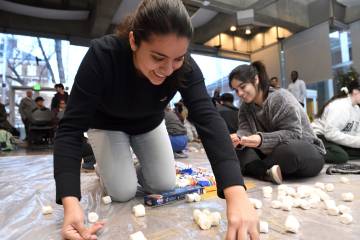