National Engineers Week competition challenges students, alumni, and community to use their noodles 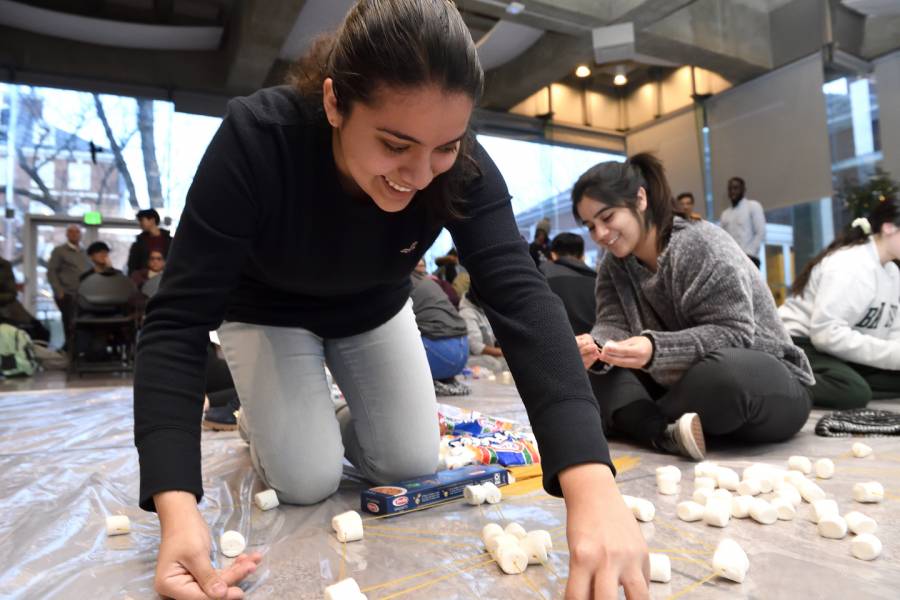 Samuel Olabanji and Abigail Park came into this year's Tower of Power competition with a plan: Model their dry spaghetti and marshmallow structure after one of chemistry's most recognizable shapes—the benzene molecule.

"Benzene is a six-carbon ring that is really cool," said Olabanji, a chemical and biomolecular engineering major at Johns Hopkins University's Whiting School of Engineering. "We thought it would be a good sturdy shape to build on."

And it was, until the whole hexagonal edifice suddenly came crashing down in a shower of spaghetti shards and sticky bits of marshmallows, leaving Olabanji and Park, a materials science and engineering major, laughing themselves breathless on the floor.

Such was the agony of defeat at the 2019 Tower of Power competition, which took place Tuesday afternoon in the Glass Pavilion. Held annually as part of the Whiting School's celebration of National Engineers Week, the contest challenges teams of undergraduates, graduate students, staff, alumni, and area middle school students to engineer the tallest possible towers from uncooked pasta and marshmallows in 30 minutes. The event was hosted by Theta Tau, a coed engineering fraternity, and sponsored by Bloomberg LP.

"We are really happy to be part of this fun event for the third year in a row," said Katie Golub, a Bloomberg recruiter, who gave away umbrellas, hats, and other Bloomberg swag at the event. "It's wonderful to see so many students involved, including students from area middle schools."

This year, Bryn Mawr, Friends School, Immaculate Conception School, Notre Dame Preparatory School, and the Waldorf School of Baltimore all fielded teams of middle school students, who came into the competition fully prepared and ready to battle for the top spot.

"This is our first time here, and we are really excited!" said Mary Sheridan, Notre Dame Prep's middle school STEAM coordinator and mathematics teacher, who accompanied the team from the all-girls independent school. "We definitely emphasize engineering activities at NDP as part of the students' innovate and design time. This team here has a lot of natural ability, and they are creative."

When the clock began its countdown, the NDP team set to work like a well-oiled machine, quickly fashioning a large base of pasta and marshmallows, and working their way up.

Across the Glass Pavilion, Jonah Facciolli and Casper Lin, both chemical and biomolecular engineering majors, were teaming up with Lisa Eklund, a grants and contract manager at the Hopkins Extreme Materials Institute, on a structure that grew tall very quickly.

"Our plan was to build a base and go from there, and it seems to be working," said Facciolli. "That way, it spreads out the stress on the structure."

That proved to be a winning strategy, with Facciolli's team, Who Are You?, taking the first-place spot with a tower measuring 64 inches.

Second place went to Team Waldo, which included alumni Joe McClintock '79 and Kathleen Breen '91, along with Louisa Kishton, a chemical and biomolecular engineering major, with a tower measuring 56 inches. Third place went to the team from the Waldorf School, who built a 54-inch structure. 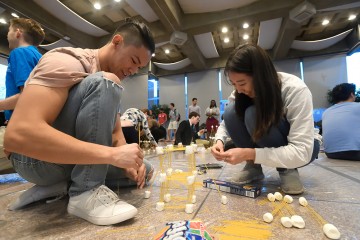