One hundred years ago, Congress ratified the 19th Amendment barring states from denying voting rights based on sex. In November 1920, more than eight million women voted for the first time.

At Johns Hopkins in 2020, events throughout the year and across the divisions will highlight the amendment's centennial. Led by Beverly Wendland, dean of the Krieger School of Arts and Sciences, and Barbara Mikulski, Homewood Professor of Public Policy and former U.S. Senator, a group bridging Hopkins and the wider community is coordinating an ever-growing series of celebrations, exhibits, concerts, and presentations to explore this watershed moment and its complex background and impact.

Additional contributors to the commemoration include Johns Hopkins Provost Sunil Kumar and affiliates from the Bloomberg School of Public Health, Carey Business School, School of Nursing, Whiting School of Engineering, Johns Hopkins Libraries and Museums, and the School of Medicine and Johns Hopkins Health System.

Feeling nostalgic? This vintage voting machine is currently on display on the M-level of @mselibrary. The machine is similar to the one women would have used to cast their first ballots after gaining the right to vote in 1920. #JHUWomensVote100 #HopkinsVotes pic.twitter.com/7NSBML2vWE

"The 100-year anniversary of the Nineteenth Amendment's ratification presents us with a quintessential teachable moment," Wendland says. "Using lenses from multiple disciplines—including history, political science, sociology, art history, literature, and philosophy—this centennial gives us the opportunity to reexamine what really happened, gain new understanding about who and where we are today, and anticipate what lies ahead."

Among the events currently scheduled are:

In the wider community, organizations celebrating the anniversary and, in some cases, joining the Hopkins efforts, include the Baltimore Museum of Art, the Baltimore Symphony Orchestra, Chesapeake Shakespeare Company, Goucher College, Towson University, and the Maryland Women's Heritage Center.

Although the movement that ultimately led to women's suffrage lasted 72 years, the passing of the 19th Amendment was far from the end of the effort; many women, in addition to non-white men, still faced enormous barriers preventing them from exercising their voting rights. The fight itself—as well as the ways in which it is remembered today—was heavily influenced by racism, sexism, and xenophobia. Many of the commemorative activities on campus and beyond will explore these interwoven factors and their lingering legacy.

The commemoration is designed to encourage exploration and awareness of every complicated facet of the historic milestone.

"Studying our history is so important. It is how we learn who we are, where we come from, and most importantly, how to be better than we were before," Mikulski said in a previous interview with the Hub. "I keep saying that this is bigger than 'pantaloons and parasols.' And that we need to make sure we remember, reflect, and recommit to the Nineteenth Amendment as we commemorate women's suffrage in America." 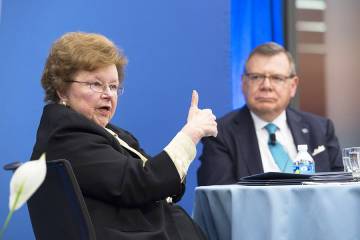 Published Jan 10, 2020
The women's suffrage movement was a 'scrappy, hard-won fight,' but it was not without its flaws, says the former U.S. senator, who is now a Homewood Professor of Public Policy at JHU