The women's suffrage movement was a 'scrappy, hard-won fight,' but it was not without its flaws, says the former U.S. senator, who is now a Homewood Professor of Public Policy at JHU

This year marks the 100th anniversary of the passage of the 19th Amendment, which gave women in the United States the right to vote. Former U.S. Sen. Barbara Mikulski, Homewood Professor of Public Policy at Johns Hopkins, and Beverly Wendland, dean of the Krieger School of Arts and Sciences, have spearheaded a universitywide commemoration of the anniversary, and Mikulski has been tapped to join the official federal commission overseeing the year-long, national celebration.

Mikulski spoke with the Krieger School of Arts and Sciences to reflect on the 19th Amendment and this momentous anniversary. 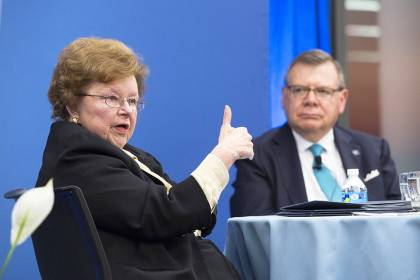 Image caption: Barbara Mikulski discusses women's leadership in business and international trade during an event at the Carey Business School in 2017

As a member of the official federal commission tasked with coordinating the year-long commemoration of the centennial of women's voting rights, why is it important for this recognition to be nationwide? Have we reached a point where we take this right for granted?

Studying our history is so important. It is how we learn who we are, where we come from, and most importantly, how to be better than we were before.

I keep saying that this is bigger than "pantaloons and parasols." And that we need to make sure we remember, reflect, and recommit to the 19th Amendment as we commemorate women's suffrage in America. We need to remember the long, hard fight for women's suffrage—the whole narrative, including the undercurrents of racism and xenophobia in the movement—and reflect on what it meant then and continues to mean today. What did getting the vote mean for women? For women's equality and women's political participation? And recommit to women's empowerment today: to expanded opportunity and stronger voice for all women across America.

"We need to remember the long, hard fight for women's suffrage—the whole narrative, including the undercurrents of racism and xenophobia in the movement—and reflect on what it meant then and continues to mean today..."
Former U.S. Sen. Barbara Mikulski
Homewood Professor of Public Policy

I don't think we take anything for granted, especially in today's culture. If anything, movements like #MeToo and #TimesUp have, I think, invigorated women's desire to be engaged and have their voices heard.

Of the women's suffrage movement, you have said "It was good, it was bad, it was terrific, it was ugly." Obviously, the good parts include women mobilizing to get the right to vote, but can you talk a little about the parts of the movement that weren't so admirable and why?

The women's suffrage movement in America accomplished something incredible, and it was a scrappy, hard-won fight. Which is something we can all be proud of.

However, the ways in which some leaders of the movement achieved their political ends isn't the most honorable. There were strong currents of racism and xenophobia throughout the movement that showed a prioritization for the white women's vote over—or even at the expense of—non-white women. It was also the case that the role of black women leaders was often minimized. Any commemoration of the movement needs to address this reality and ensure that there are no more hidden figures.

There's a quote from former President George W. Bush on this exact subject that I love. He delivered it during his address at the opening of the Smithsonian's African American History Museum. He said, "A great nation does not hide its history. It faces its flaws and corrects them." Which is exactly what we need to do in commemorating the suffrage movement. There are important lessons to be learned from our history as we continue to fight for women's equality today, especially in terms of intersectionality.

In looking back at all that was involved in women gaining the right to vote, are there lessons learned that we can apply to certain issues today?

Oh absolutely! Organizing, organizing, organizing! These women were incredible activists and organizers. I think their methods and tactics would still be effective today and I know that young people—who are so eager to make a difference—could learn a lot from the suffrage movement and apply those lessons to any political issue that they are passionate about.

As the first Democratic woman elected to the U.S. Senate, how do you think women can achieve more equal representation in government?

Vote. Get involved. Make your voice heard. But that goes for everyone—not just for women. 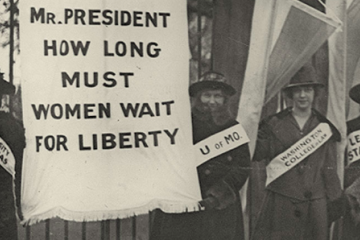 In commemoration of the 100th anniversary of the passage of the 19th Amendment that gave U.S. women the right to vote, Johns Hopkins University engages the community to educate, explore, and raise awareness about this momentous occasion.

Civic engagement and political participation are so important. And that involvement/participation can take many forms. Whether you're outgoing or more introverted, there are ways for you to get involved.

Going to marches and rallies are a great way to make your voice heard, but so is writing to/calling your elected officials. Work on a campaign, volunteer at an organization who is already working on or fighting for an issue you care deeply about. Join campus and community organizations. I often hear people agonizing over precisely how to get involved—I think you should just jump right in; as you continue to try different things, you'll find what you are passionate about and the best way to use that passion.

If there is one message you hope people walk away with after this year of commemoration, what would that be?

In order for our democracy to work for all of us, we all have to work at democracy.