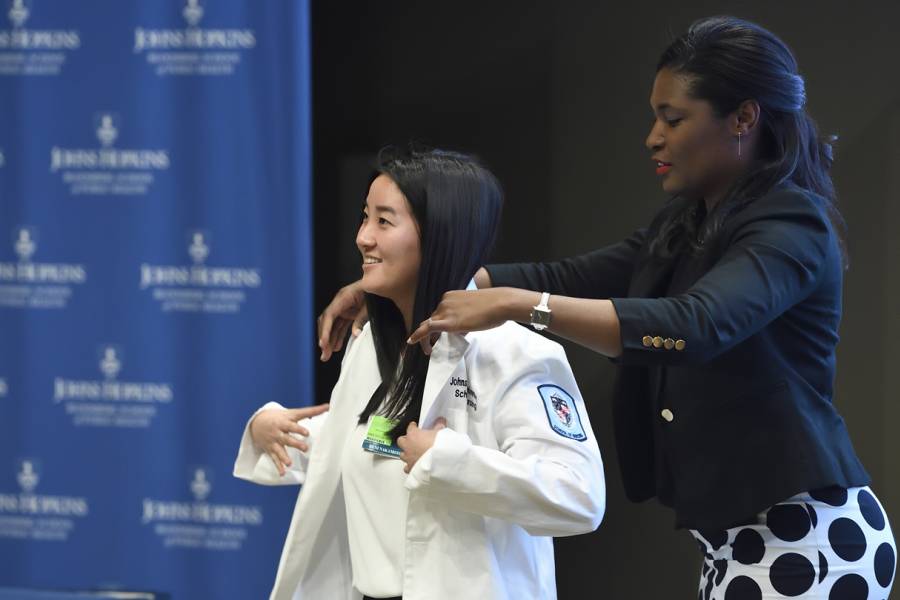 Since 2014, the Johns Hopkins School of Nursing has held white coat ceremonies to mark the entrance of nursing students into the health profession

As a young man, Emon Perl dreamed of becoming a doctor. But after years working as an emergency room tech, he found himself uninspired and questioning his path in life. After consulting with his colleagues in the ER, he discovered that a career in nursing was more in line with his goals and values.

"Being a person of service is very much a part of my identity, and it's important for me to give back to the community," says Perl, who hails from Long Beach, California. "So I chose nursing."

During a ceremony Thursday in Sommer Hall on the East Baltimore campus of Johns Hopkins University, Perl and more than 100 other members of the School of Nursing's Class of 2021 took part in a cloaking ceremony where they were formally presented with white coats that symbolize their entry into the health profession. After the ceremony, they recited the School of Nursing pledge that vows to "give voice to the voiceless" and to be a beacon of light for those in their care, even through "vulnerable, difficult, and painful times."

Since 2014, @JHUNursing has held white coat ceremonies to mark the entrance of nursing students into their new careers. #GoHopNurse pic.twitter.com/YURh5JxXeJ

For Perl, donning the white coat, a longtime symbol of physicians, represents the gravitas and dignity of his new path.

"We're not wearing traditional nursing attire or a nurse's hat," Perl says. "A white coat is more than that, and I think nurses are more than what they've been depicted as. So that's really meaningful."

The white coat ceremony, a tradition in medical schools since the early 1990s, was adopted by the Johns Hopkins School of Nursing in 2014. That first ceremony at the School of Nursing was supported by the Arnold P. Gold Foundation and by the American Association of Colleges of Nurses. It is now supported by the White Coat Fundraiser, which purchases white coats for incoming students by using funds provided by alumni, faculty, staff, students, and supporters.

"The purpose of extending the white coat ceremony to those embarking upon a nursing career is to endorse the importance of interprofessional education in health care and to champion the role of nurses as caregivers, teachers, researchers, and advocates," says Marie Nolan, executive vice dean and professor at the School of Nursing.

"We were heartbroken when we found out she was going to move, but she is very determined and cares deeply about people, so she'll make a good nurse," Mary Ann Mammos says. As Dimitra crossed the stage to don her white coat, both George and Mary Ann snapped photos on their phones of their daughter's first steps as a nurse.

During a keynote address, Tamar Rodney, an assistant professor at the School of Nursing, discussed three characteristics that make successful nurses: friendship, humanity, and character. These are the wellsprings, she explained, that nurses must draw from when facing challenges.

"Display your humanity, preserve your friendships, and strengthen your character," Rodney said. "Learn from each other, and embrace the environment that you're in—it is not normal, it is extraordinary. And when you finish in 572 days—I'll keep a calendar going for you—not only will you feel accomplished, but you will have left this place better than it was when you came." 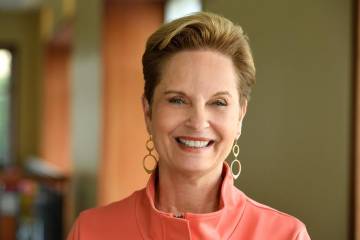 Published Dec 26, 2019
Cynda Hylton Rushton shares insights about the issues that contribute to the burnout of health care providers 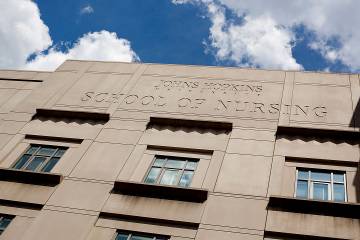 Johns Hopkins School of Nursing named one of best for men