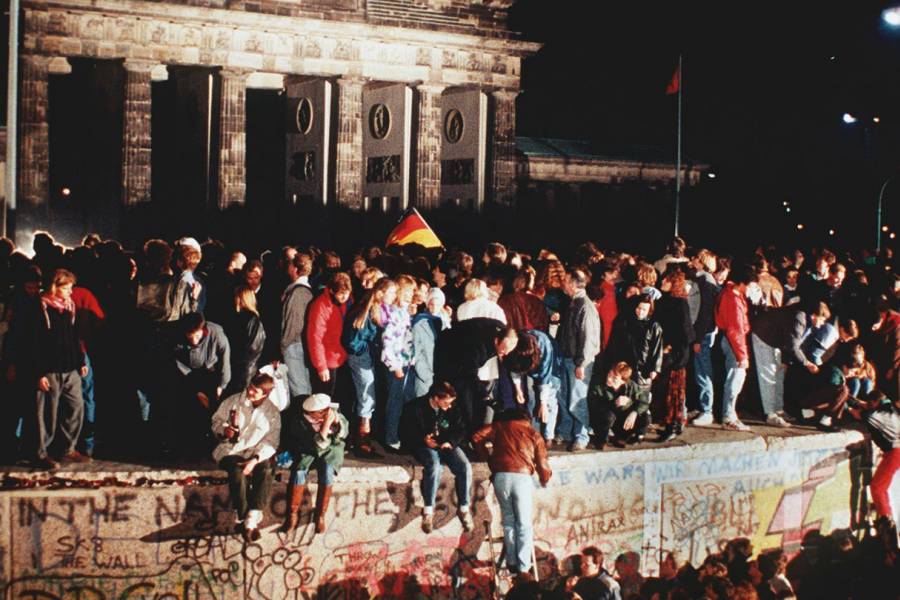 The rise and accidental fall of the Berlin Wall

When the Berlin Wall opened 30 years ago, it created a fracture in the Iron Curtain and allowed safe passage out of Soviet territory. But the opening, the result of a series of bureaucratic blunders, was never meant to happen.

On Nov. 9, 1989, the Berlin Wall opened, spilling thousands of East Berliners across the border into territories occupied by the U.S., France, and Great Britain. There, they were greeted by West Berliners with bouquets of flowers and bottles of champagne. But most importantly, once in West Berlin, they were able to gain passage out of Soviet territory.

"[The wall's opening] is perhaps the most important announcement made in central Europe since the end of World War II, certainly since the wall went up," ABC News anchor Peter Jennings said during a special broadcast that evening.

The historic opening of the Berlin Wall, a symbol of the tyranny of Soviet communism and the Iron Curtain itself, had been the result of a series of blunders and miscommunications by the East German regime and a public relations campaign gone irreparably wrong. Thousands of protesters swarmed the border checkpoints that night until a secret police officer finally relented, ordering the passport-control guards under his command—who had previously been under shoot-to-kill orders—to open the checkpoint gates, single-handedly altering the course of German history.

But there are generations of people alive today who don't remember the fall of the Berlin Wall or what it meant to people around the world, says Mary Elise Sarotte, a professor of historical studies at the Johns Hopkins School of Advanced International Studies.

"It's getting to be so far along in the past now that it's fading from living memory," she says. "It seemed like the Berlin Wall was going to last a long time—and then suddenly it didn't."

For an in-depth look at the events that led to the fall of the Berlin Wall 30 years ago this week, the Hub reached out to Sarotte, an expert in the history of international relations and author of The Collapse: The Accidental Opening of the Berlin Wall (Basic Books, 2015), which centers on the events of Nov. 9 and the figures who helped open East Berlin—and the rest of Soviet Germany—to the West.

What was the Berlin Wall and what did it represent?

When World War II ended, the U.S., Britain, France, and the Soviet Union were allies. They had initially divided Germany into two zones: the Soviet zone of East Germany and a combined zone of West Germany occupied by the British, the French, and the Americans. The exception was Berlin, which was subdivided by itself because, as the capital of Nazi Germany, it was so important. There's sometimes a mistaken belief that Berlin got divided because it happens to sit on the border between the two sides of Germany, but that wasn't actually the case. Berlin was well inside what became East German territory. So Berlin was subdivided, like all of Germany, into British, American, and French sectors and a Soviet sector. 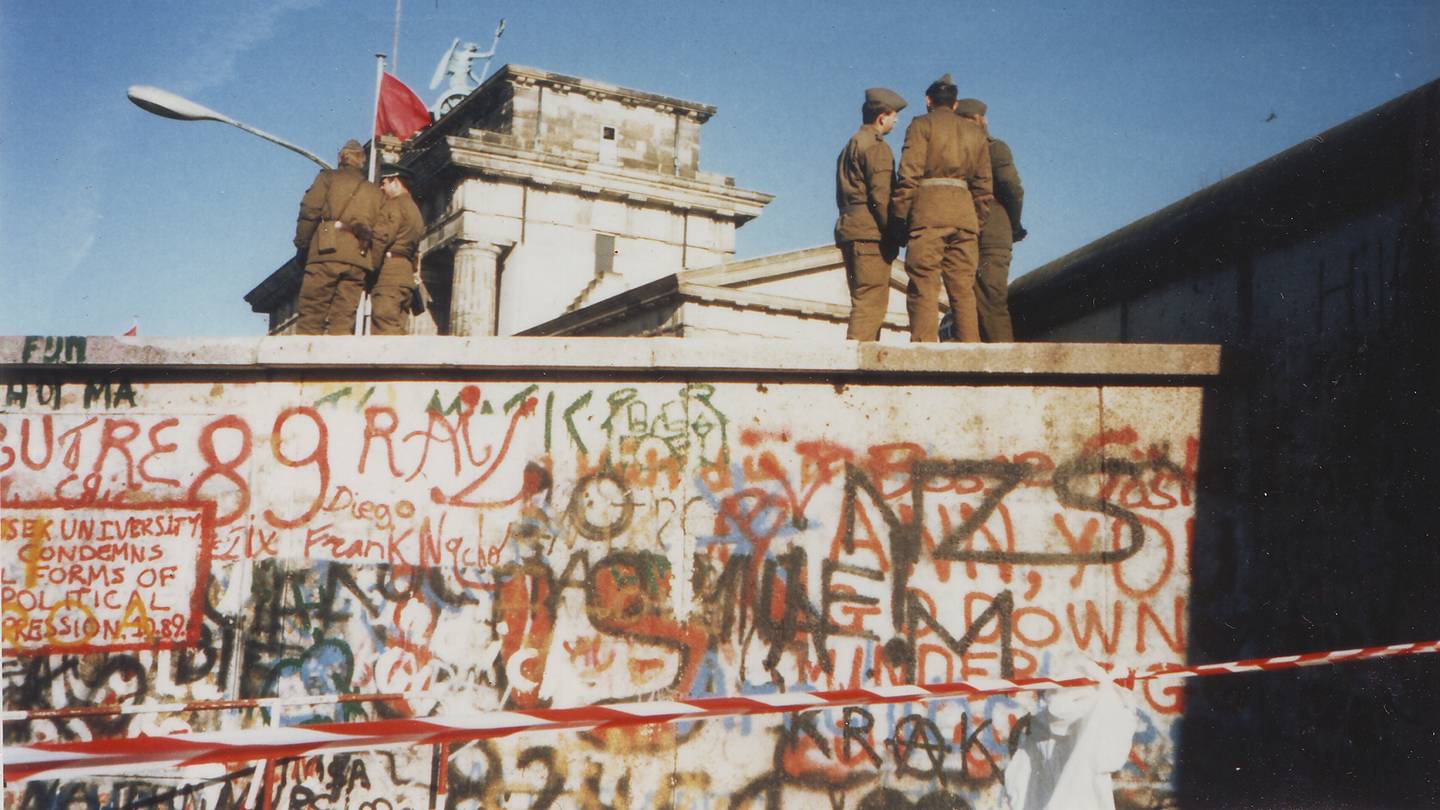 Image caption: Soldiers stand atop the Berlin Wall in November 1989

The Soviet-backed regime didn't like having a hole inside the Iron Curtain because refugees could flee through it. So in 1961, the Soviet-backed regime encircled West Berlin, at first with barbed wire and then increasingly with various walls and barriers. It cut West Berlin off entirely, except for certain approved air, rail, and road stretches that were heavily guarded. And that was the status quo from 1961 to 1989.

The short answer is that on Nov. 9, 1989, the wall opened. The longer answer is more complicated.

But Gorbachev was also a proud son of the Soviet Union. He revered the Soviet soldiers and civilians who had died defeating the Nazis, and he felt that the Soviet Union had an unquestionable right to be in divided Germany. So he was not inclined just to simply open the wall and abandon East Germany. He was a reformer, but he was not such a reformer that he was going to tear down the wall.

And the regime in East Germany was quite a hardline regime because it realized that its very survival depended on the wall persisting. It was opposed to Gorbachev's reforms and was definitely opposed to any potential openings across the wall. People were still being shot for crossing the wall without authorization as late as February 1989. The last death of someone trying to cross the wall was in March 1989—someone who tried to cross in a balloon and the balloon malfunctioned and he fell to his death.

The surprising human factors behind the fall of the Berlin Wall

But by the summer and early fall of 1989, the East German regime was facing massive public protests that were arising partly because the people were inspired by Gorbachev and wanted reforms in East Germany and the Soviet Union. The East German regime was trying to resist that pressure to make reforms, and in response, the number and size of protests grew. The regime tried to crack down by conducting a kind of Tiananmen Square demonstration—when the Chinese government opened fire on its own people—but it failed when local leaders refused to carry it out.

So they were searching for other ways to deal with the crowds, and one East German leader decided to try kind of a public relations ploy—he issued a draft travel law that made it sound as if restrictions on leaving East Germany would be eased. It was a sham because the fine print still contained all the legalese that the East German regime had used to keep people locked up behind the wall, but the announcement of the plan was so badly botched that the journalists in the room thought the policymakers were actually announcing the opening of the wall. They reported that the wall was open, even though it wasn't. And people just literally ran to the wall's border crossing to demand to cross immediately.

The border guards had no idea what was going on. They had received no orders, and when they called their superiors, they said that it's all still business as usual and not to let anyone out. Chaotic scenes developed at the border, with guards not knowing what to do and the crowds growing from hundreds to thousands to tens of thousands. Finally, one border guard named Harald Jäger—a man who thought he was dying of cancer, so had nothing left to lose—looked around at his men and said, "You know, either we're going to start shooting these people or we're going to open up." 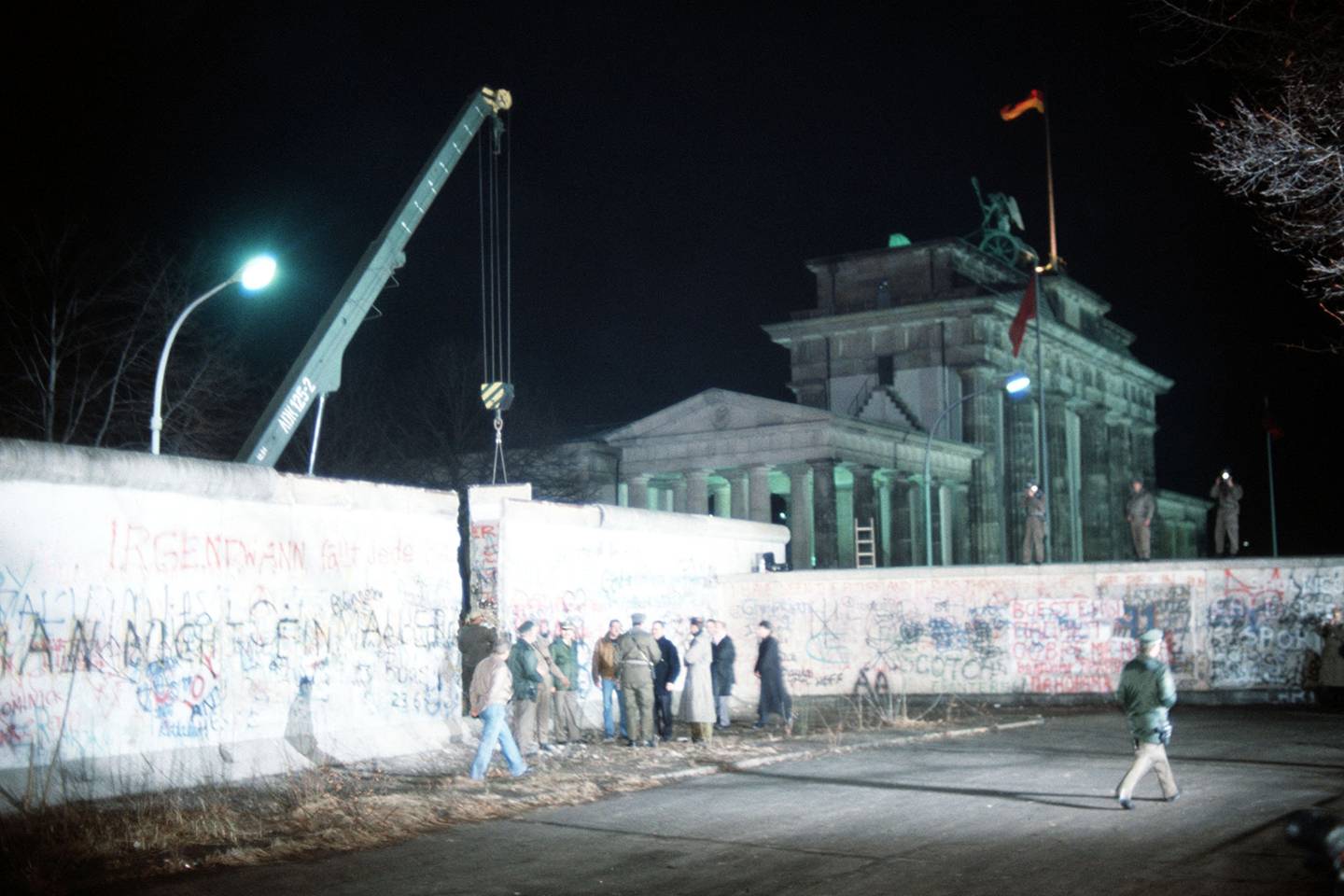 So he opened it up, and people were flooding across the wall. Images of this crossing were broadcast around the world, which caused even more people to come to the wall to cross, and other border guards started opening up. So gradually the wall was overwhelmed. Moscow didn't find out until hours later, but by that time there were so many people in the streets that it would have taken an enormous amount of bloodshed to reseal the city. Gorbachev didn't want to do that, so the wall was left open.

What did crossing the wall into West Berlin mean for East German refugees?

West Berlin was a fully functioning, democratic, capitalist Western city. And it also allowed passage to the West.

Initially, when Germany and Berlin were divided, it was done haphazardly because everyone thought this was just temporary until a peace conference that was scheduled to occur a few months later. The one thing the Western Allies did pay attention to at the time was establishing air routes between West Berlin and West Germany, mainly for practical reasons so that they had clear flight routes where they knew they wouldn't hit Soviet planes.

Eventually there were negotiations to establish certain roads that could be driven and certain train routes, which the Soviets and East Germans of course hated. These routes were heavily guarded, but they didn't want to have World War III over it, so they let it persist.

You were a student in West Berlin around the time of the wall's opening—what was that like?

I was studying in West Berlin in academic year 1988–89. Unfortunately, I wasn't in Berlin on the night of Nov. 9 itself, however, which meant I had to write a book to make up for missing it. (Laughs)

But when I heard about the wall opening, I was shocked. It was evening in American time, which meant it was really, really late in German time—like the middle of the night. I called a friend back in West Berlin. I woke her up around 3 a.m., assuming she would be awake. But she had gone to bed without knowing. She was like, why are you calling me? It was just a very strange conversation because she didn't know what was going on, and she was there in West Berlin. But I knew—and the rest of the world was watching, too.