Johns Hopkins University President Ronald J. Daniels was among dozens who spoke at Baltimore event honoring the memory of the late congressman

Two days before he died, U.S. Rep. Elijah Cummings, too weak to get out of bed, was wheeled to the 14th-floor heliport of The Johns Hopkins Hospital—"sunshine therapy," his wife, Maya Rockeymoore Cummings, told the crowd of hundreds that gathered to celebrate the life and legacy of the late congressman at Morgan State University on Wednesday night.

From the roof of the hospital, she said, he looked out across Baltimore in every direction, a proud native son surveying the city he loved and faithfully served in public office for nearly four decades.

"He looked upon the Inner Harbor, he looked upon south Baltimore where he grew up," she said. "He looked at downtown, he looked toward the west side, and it was so glorious. And he said: 'Boy, I've come a long way.' Man, has he come a long way. This was a great man, a man who has inspired so many. But he has been just as inspired by all of you who have poured so much into him."

Wednesday's events at Morgan State, including an all-day public viewing and an evening memorial that lasted more than four hours, marked the first in a series of public tributes and remembrances for Cummings, who died Oct. 17 at 68. He will lie in state in the U.S. Capitol today, and his funeral will be held Friday.

More than two dozen elected officials, community leaders, and others spoke Wednesday night, remembering Cummings as a devoted and selfless public servant, a revered and inspiring leader, a champion for civil rights and the underprivileged.

"He was a thinker with an incisive intellect who studied the world around him, probing deeply into the most difficult issues we face, and he urged others to do the same," Johns Hopkins University President Ronald J. Daniels said at the event at Morgan State's Murphy Fine Arts Center. "He listened carefully to those whose voices were not the loudest, but in the end the most in need of being heard.

"And in ways both unconscious and deliberate, he imparted knowledge and wisdom, implored us to embrace the complexity of our democracy, and charged us with living up to our highest aspirations as humans and as a society.

"Each and every day of his life, Elijah taught us these lessons in words and, more importantly, in his actions."

Cummings' funeral is scheduled for 10 a.m. Friday at his longtime church near Baltimore. Two former presidents, Barack Obama and Bill Clinton, will be among the speakers. 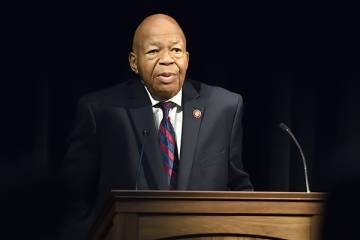 'An unflinching champion for the people of Baltimore, our state, and our nation'