Rep. Elijah Cummings, 'unflinching champion for the people of Baltimore, our state, and our nation,' dies at 68 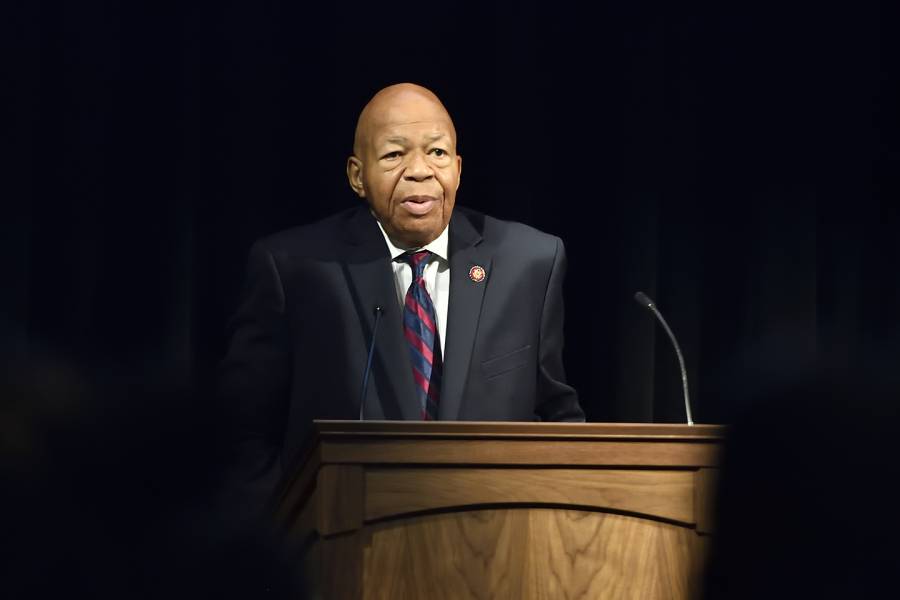 U.S. Rep. Elijah E. Cummings, a longtime public servant known for his forceful and formidable oratory style and his fierce advocacy for Baltimore and its residents, died early Thursday, his office said. He was 68.

Cummings, a Baltimore native, was in his 12th term representing Maryland's 7th Congressional District—which includes Johns Hopkins University's Baltimore campuses—in the U.S. House of Representatives. During more than two decades on Capitol Hill, he rose to become one of the most powerful and prominent Democrats in Congress and served as chair of the House Committee on Oversight and Reform. He also remained a visible and vocal leader in Baltimore, regularly appearing at community events and commuting to and from Washington, D.C., from his home in West Baltimore.

"I am profoundly saddened by the passing of Congressman Elijah Cummings, an extraordinary and dear friend and an unflinching champion for the people of Baltimore, our state, and our nation," Johns Hopkins University President Ronald J. Daniels said in a statement this morning. "A proud son of this great city, Elijah Cummings held all of us—individually and collectively—to the highest of standards. He confronted us with our failings and demanded of us our potential. With a sharp wit, kind heart, and towering wisdom, Elijah Cummings has been a singular force for justice and a fierce advocate for those whose voices he knew must be heard in order for our country to deliver on its promise. And his love and loyalty to his family, our city, and the West Baltimore community he faithfully returned home to every night, knew no bounds. Elijah Cummings' life and leadership stand as a shining example of the values we hold most dear. My heart goes out to his wife, Maya, and to the rest of his family."

Cummings was a frequent guest and speaker at Johns Hopkins events over the years and a steadfast supporter of the institution's community efforts, including the HopkinsLocal and BLocal economic inclusion initiatives, the Vision for Baltimore program, and the Henderson Hopkins school in East Baltimore.

This past June, after a full day spent debating a nearly $1 trillion appropriations bill on the House floor, Cummings attended Hopkins on the Hill, a showcase for the value of federally funded research at JHU. He spent considerable time at the event speaking with faculty members and students, asking questions and learning about their work.

"We join Maryland and all of America in mourning the loss of Congressman Cummings," said retired U.S. Sen. Barbara Mikulski, a longtime congressional colleague of Cummings who now serves as professor of public policy and adviser to the president at Johns Hopkins University. "We extend our condolences and sympathies to his family and loved ones during this time. America has lost a giant, the 7th Congressional District has lost a champion, and I, along with so many others, have lost a friend."

Cummings was born in Baltimore in 1951, the third of seven children. Both of his parents were sharecroppers. He graduated with honors from Baltimore City College high school in 1969, earned a bachelor's degree in political science from Howard University in 1973, and earned a JD from the University of Maryland School of Law in 1976. He spent 14 years as a member of the Maryland House of Delegates before being elected to Congress in 1996.

Cummings received an honorary degree from Johns Hopkins University in 2015 and served as the featured speaker at the universitywide Commencement ceremony that same year. His remarks came just weeks after the unrest in Baltimore that followed the death of Freddie Gray in police custody.

"You must be the agents of change, for you have been blessed with an awesome education," Cummings told the assembled graduates. "You are the ones that can guide us the rest of the way. I've often said that our children are the living messages we send to a future we will never see. You, you, and you are our messengers."