The material naturally exists between two states, a finding that could pave the way for more complex computing in the future

Quantum computers with the ability to perform complex calculations, encrypt data more securely, and more quickly predict the spread of viruses may be within closer reach thanks to a discovery by Johns Hopkins researchers.

"We've found that a certain superconducting material contains special properties that could be the building blocks for technology of the future," says Yufan Li, a postdoctoral fellow in the Department of Physics & Astronomy at Johns Hopkins University and first author of the paper, which will be published Friday in Science.

Today's computers use bits, represented by an electrical voltage or current pulse, to store information. Bits exist in two binary states, represented in computing as "0" or "1." Quantum computers, based on the laws of quantum mechanics, use quantum bits, or qubits, which not only use two states, but also use a superposition of those two states. A famous example of qubit is Schrodinger's cat, a paradox that posits that a hypothetical cat that may be both dead and alive at the same time.

"A more realistic, tangible implementation of qubit can be a ring made of superconducting material, known as flux qubit, where two states with clockwise- and counterclockwise-flowing electric currents may exist simultaneously," says Chia-Ling Chien, professor of physics at Johns Hopkins and an author on the paper.

The ability to use qubits makes quantum computers much more powerful than existing computers when solving certain types of problems, such as those relating to artificial intelligence, drug development, cryptography, financial modeling, and weather forecasting. But in order to exist between two states, qubits using traditional superconductors require a very precise external magnetic field be applied on each qubit, thus making them difficult to operate in a practical manner. 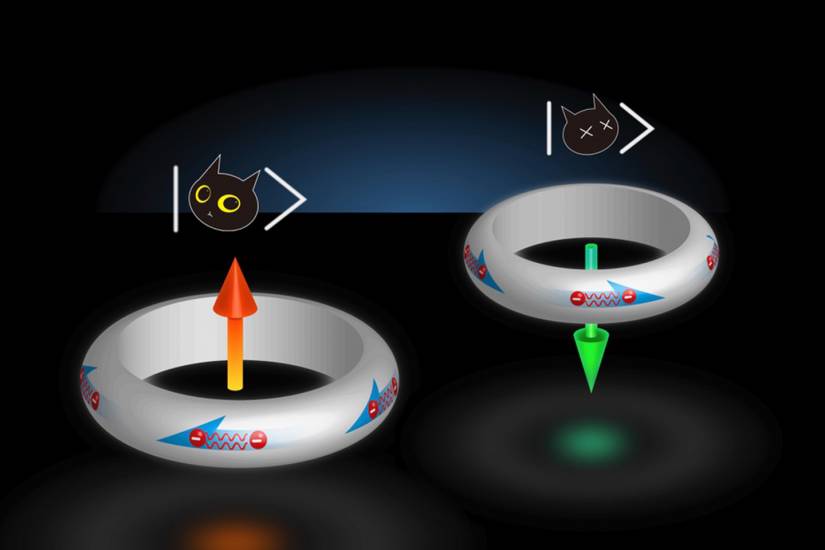 Image caption: A visual representation of a qubit, which can exist simultaneously between two states. A famous example of a qubit is Schrodinger's cat, a hypothetical cat that can be both dead and alive. Similarly, a flux qubit, or a ring made of a superconducting material, can have electric current flowing both clockwise and counterclockwise at the same time.

In the new study, Li and colleagues found that a ring of β-Bi2Pd naturally exists between two states in the absence of an external magnetic field. Current can inherently circulate both clockwise and counterclockwise, simultaneously, through a ring of β-Bi2Pd.

"A ring of β-Bi2Pd already exists in the ideal state and doesn't require any additional modifications to work," Li says. "This could be a game changer."

"Ultimately, the goal is to find and then manipulate Majorana fermions, which is key to achieving fault-tolerant quantum computing for truly unleashing the power of quantum mechanics," says Li.