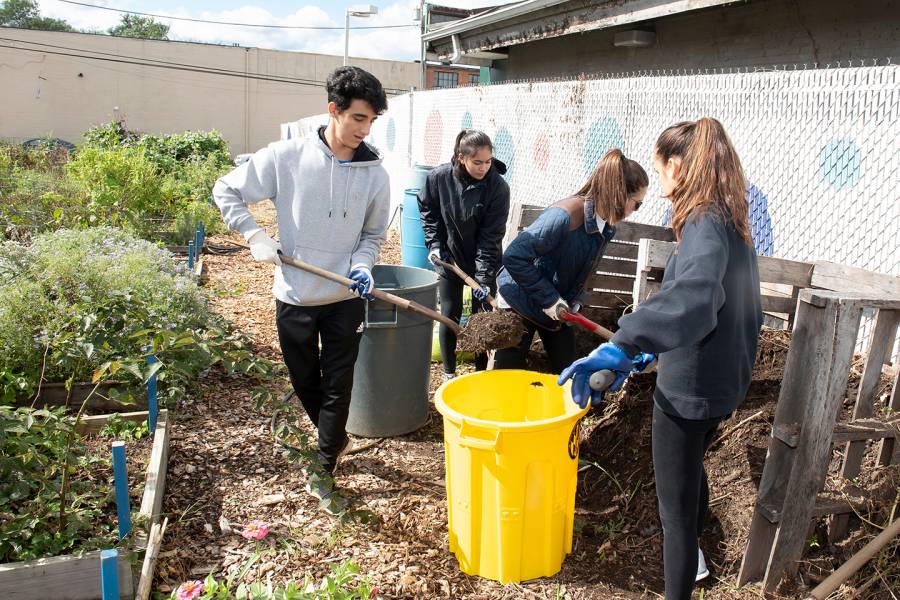 Through President's Day of Service and other volunteer opportunities, Johns Hopkins student volunteers have played a role in transforming Sisson Street Park from a neglected, overgrown city lot into a vibrant and thriving neighborhood gathering spot

Sisson Street Park in Remington is home to meditation groups, exercise classes, movie nights, and more than 40 community gardens. But when Bill Cunningham first moved to the Baltimore neighborhood 13 years ago, the park was little more than a vacant lot.

"The grass was four or five feet tall. It was covered in trash and debris, and the only thing you could do there is cut through it on a little path that ran catty-corner through it," says Cunningham, who works with the Greater Remington Improvement Association on beautification efforts and community events throughout the neighborhood. 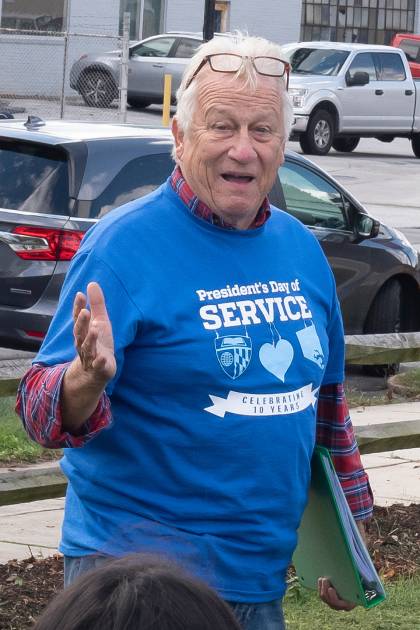 Image caption: Bill Cunningham of the Greater Remington Improvement Association speaks to volunteers during President's Day of Service in 2018.

After Cunningham began mowing the lot—which at the time was owned by the city—he saw the realization of the Field of Dreams mantra: "If you build it, they will come." Soon after the tall grass had been cleared, Cunningham passed by the lot and saw a father and son playing catch. That's when he realized that Sisson Street Park could become a space for the entire community, he says.

Of course, it would take a great deal of work to turn a mowed lot into a vibrant and thriving neighborhood park. Cunningham knew just where to turn for help in numbers.

"We had a relationship with Johns Hopkins because students ran a homework club over at the Church of the Guardian Angel," Cunningham says. "When we heard about the President's Day of Service, we had the perfect project for it."

The university's annual President's Day of Service, which takes place Saturday, brings together Johns Hopkins students and other volunteers for service at dozens of Baltimore nonprofits and community organizations, including schools, neighborhood associations, and homeless shelters. The event, now in its 11th year, was launched in 2009 by Johns Hopkins University President Ronald J. Daniels. Nearly 1,000 students are expected to participate at 39 sites across the city this year, organizers said. 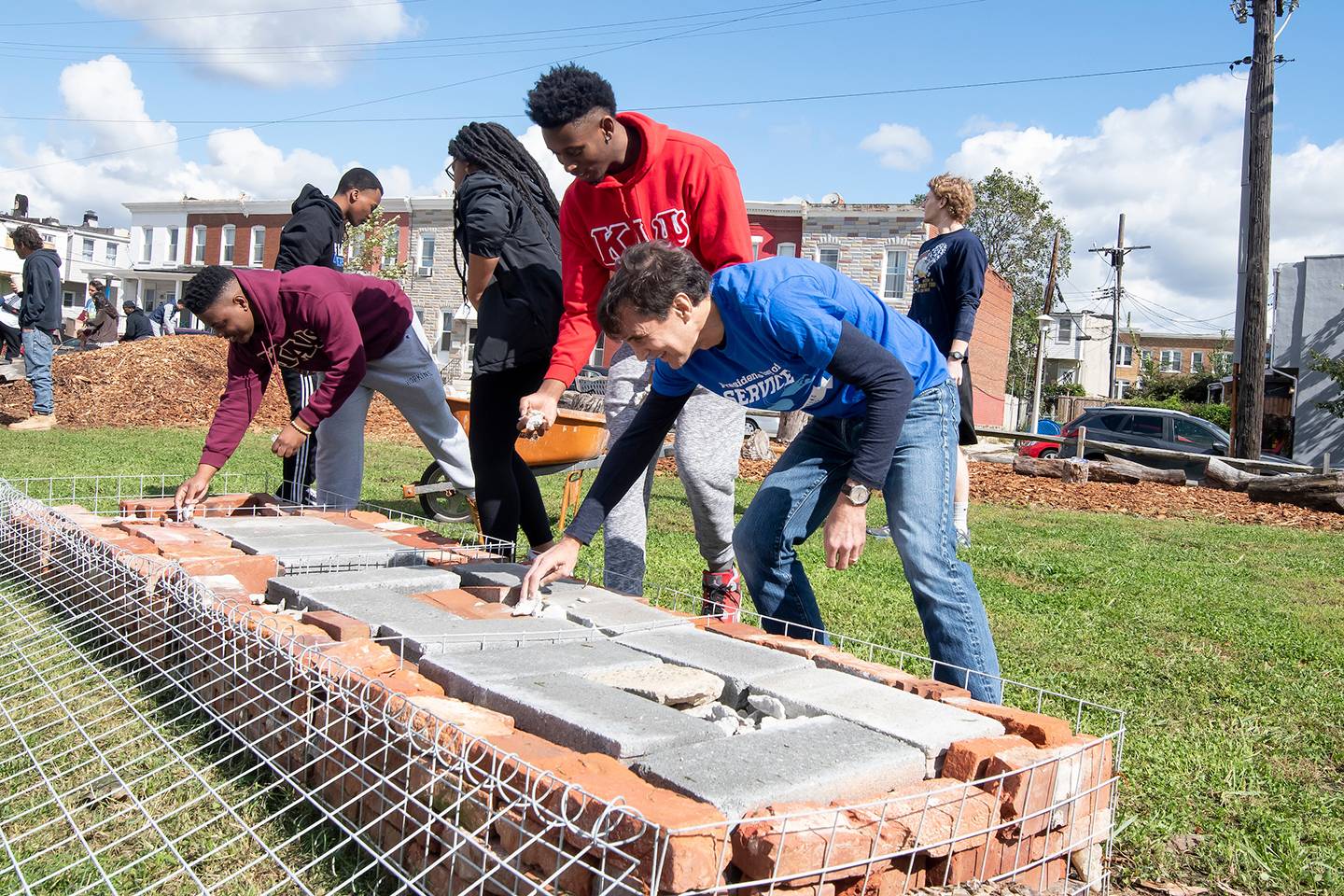 "The exciting thing about the President's Day of Service is the potential for it to lead to deep and powerful relationships within Baltimore that go far beyond one day," said Misti McKeehen, executive director of the Center for Social Concern. "When we combine service and reflection, our volunteers have the opportunity to build stronger connections with the inspiring community organizations in the city we call home."

Hopkins students have volunteered in Remington and at the Sisson Street Park for nearly a decade. Cunningham says their efforts have helped transform a site of blight and neglect into something of an urban oasis.

At the beginning, he says, while the space was still mostly a vacant lot, student volunteers were largely tasked with picking up trash and moving dirt around. As it has evolved, students have become more involved with park upkeep, pulling weeds, winterizing garden beds, and mulching.

"I think five people working together is more effective than five people working separately, and I love that [President's Day of Service] harnesses that power by bringing the student body together to work on these projects."
Daniel Swartz
Junior at Johns Hopkins University

Daniel Swartz, a JHU junior majoring in applied math and statistics, volunteered at Sisson Street Park last year during President's Day of Service and is registered to participate again this year.

"I think in situations like this, the collective effort is greater than the sum of its parts," Swartz says. "I think five people working together is more effective than five people working separately, and I love that [President's Day of Service] harnesses that power by bringing the student body together to work on these projects."

Future plans for the park include building a pavilion and a playground for children, Cunningham says.

Looking back at the evolution of both the park and Remington as a whole over the past decade, Cunningham adds that the neighborhood is grateful to Johns Hopkins and its students for their role in helping the area thrive.

"When I moved here 13 years ago, I recaptured something I lost when I was 15 years old: a sense of community," he says. "Now it's really becoming something special." 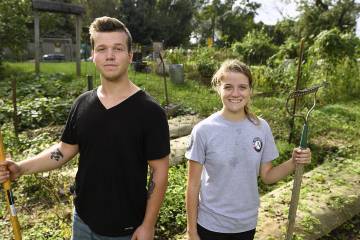