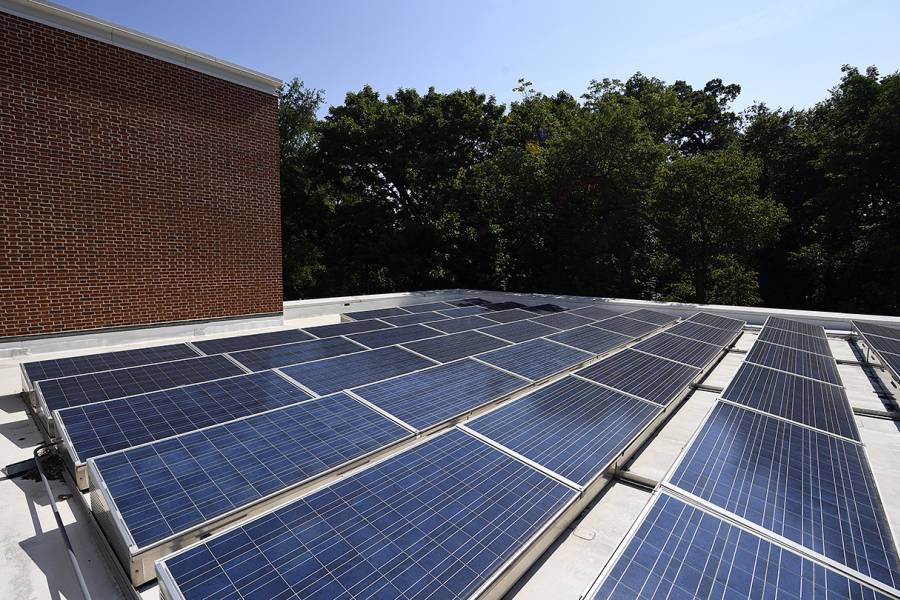 With a recent industry-leading commitment to purchasing renewable energy, the formation of the universitywide Sustainability Leadership Council, and the arrival of a new director for the Office of Sustainability, Johns Hopkins is poised to take the next steps in its efforts to shrink its carbon footprint, protect the environment, and educate the next generation of sustainability-minded leaders

When Valeria Hesse started at Johns Hopkins University, she noticed that many of her fellow first-year students weren't thinking about the impact their actions had on the environment. Some loaded their dining hall trays with more food than they could eat. Others frequently bought bottled beverages and tossed the empties in the trash. Many opted for plastic bags when they shopped at local stores.

So Hesse, now a junior majoring in chemical and biomolecular engineering, decided to educate her classmates. She joined the student group Sustainable Hopkins Innovative Projects, known as SHIP, and encouraged others to choose reusable bags and water bottles, avoid wasting food, and opt for locally grown food. She also joined a coalition of environmental groups that meets periodically to collaborate and share ideas.

"Sustainability is something that will always be important to me, and I'll carry that with me to wherever I go with my career," says Hesse, who currently serves as president of SHIP.

That's a mindset that Julian Goresko, director of Sustainability at Johns Hopkins, hopes to instill in more students, faculty, and staff members. Goresko, appointed to his position in the spring, is overseeing a reinvigoration of the university's sustainability initiatives. The first steps came on Earth Day in late April, when JHU President Ronald J. Daniels announced that the university would make the largest purchase of renewable energy by any single higher education institution in the country. By transitioning to solar power and other renewable energy sources, the university is on track to reduce its carbon footprint from a 2009 baseline by 51% by 2025. 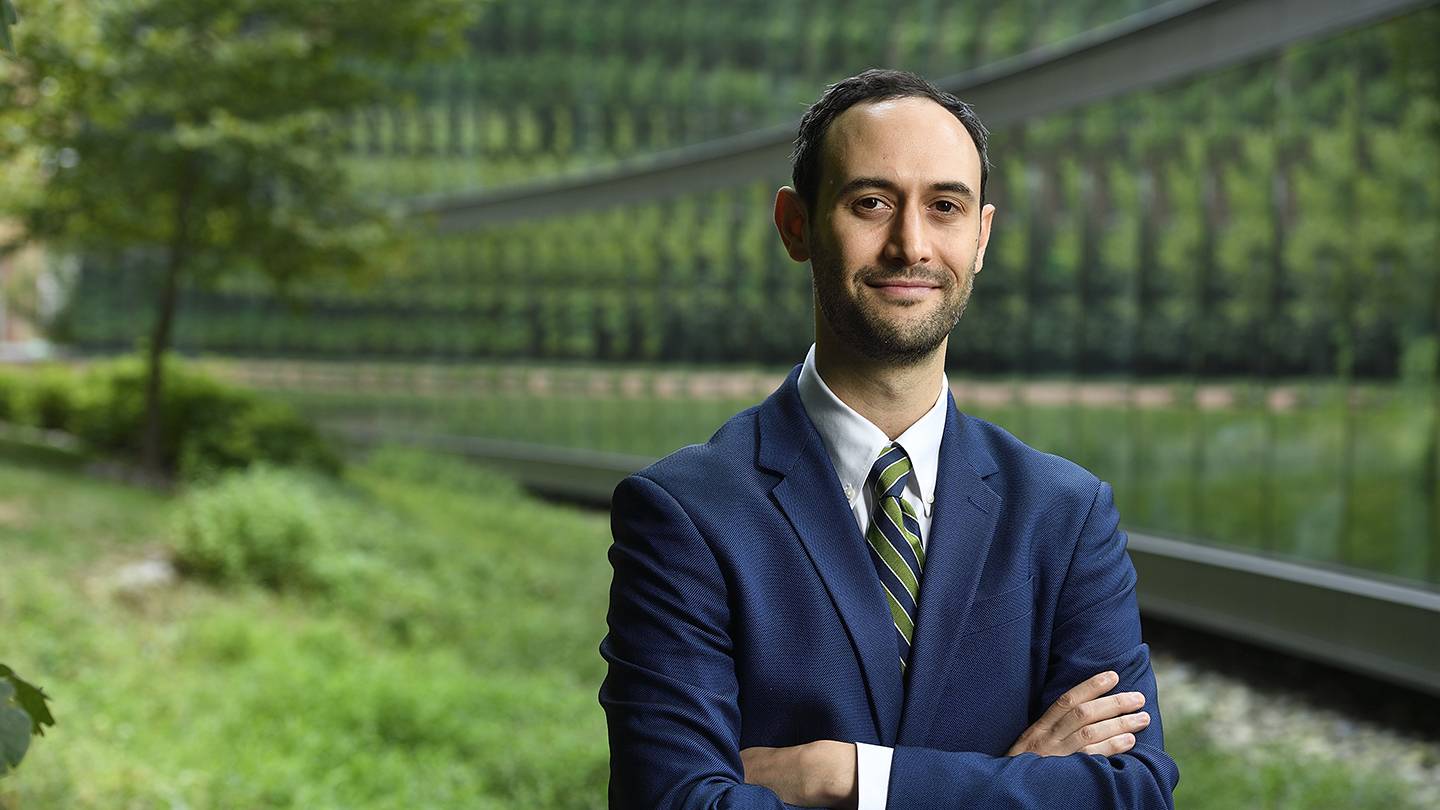 Image caption: The son of a nature photographer, Julian Goresko (pictured), the new director of Sustainability at Johns Hopkins, spent his childhood exploring the outdoors. He always knew he wanted to protect the environment for future generations.

"The council will set the stage for future planning," Goresko says. "Our goals will look very different a year from now."

Peter Winch, a professor of international health in the university's Bloomberg School of Public Health, and Bob McLean, the university's vice president for facilities and real estate, will co-chair the council. The group will be divided into four subcommittees:

"I think Hopkins is uniquely set up to be a leader in sustainability because it's both a data-centric and health-centric institution," says Goresko, who came to the university after a decade at the University of Pennsylvania's sustainability office. "I'm really excited to help steward these efforts. One of the things I enjoy most is bringing people together to shepherd a process by which a vision can emerge."

"Sustainability is something that will always be important to me, and I'll carry that with me to wherever I go with my career."
Julian Goresko
Director, Johns Hopkins Sustainability

Goresko began his own undergraduate career as a philosophy major, interested in questions of morality and ethics. But as he deepened his studies, he realized he didn't want to just contemplate the common good, he wanted to take action to make the world a better place. The son of a nature photographer, Goresko had spent his childhood exploring the outdoors and wanted to protect the environment for future generations.

He completed both a bachelor's and master's degree in environmental studies at Penn and took an internship with the university's growing sustainability office.

"When I think back to my time at Penn, I'm proud of creating a plan from scratch without having a guidebook to do so," Goresko says. "We transformed the Office of Sustainability to an office that was embedding a culture of sustainability within the university. We worked closely with students, helping to build a variety of leadership opportunities, fellowship opportunities, and advisory groups."

Sustainability is much more than recycling bins and solar panels, says Goresko. It's about taking efforts on both the macro and micro level to improve the environment. A university sustainability program should aim to mold students to become thinkers and leaders in protecting the environment. Students should graduate not only with a habit of opting for reusable bags and locally sourced food but with the skills to help their workplaces, communities, and homes become more environmentally friendly. 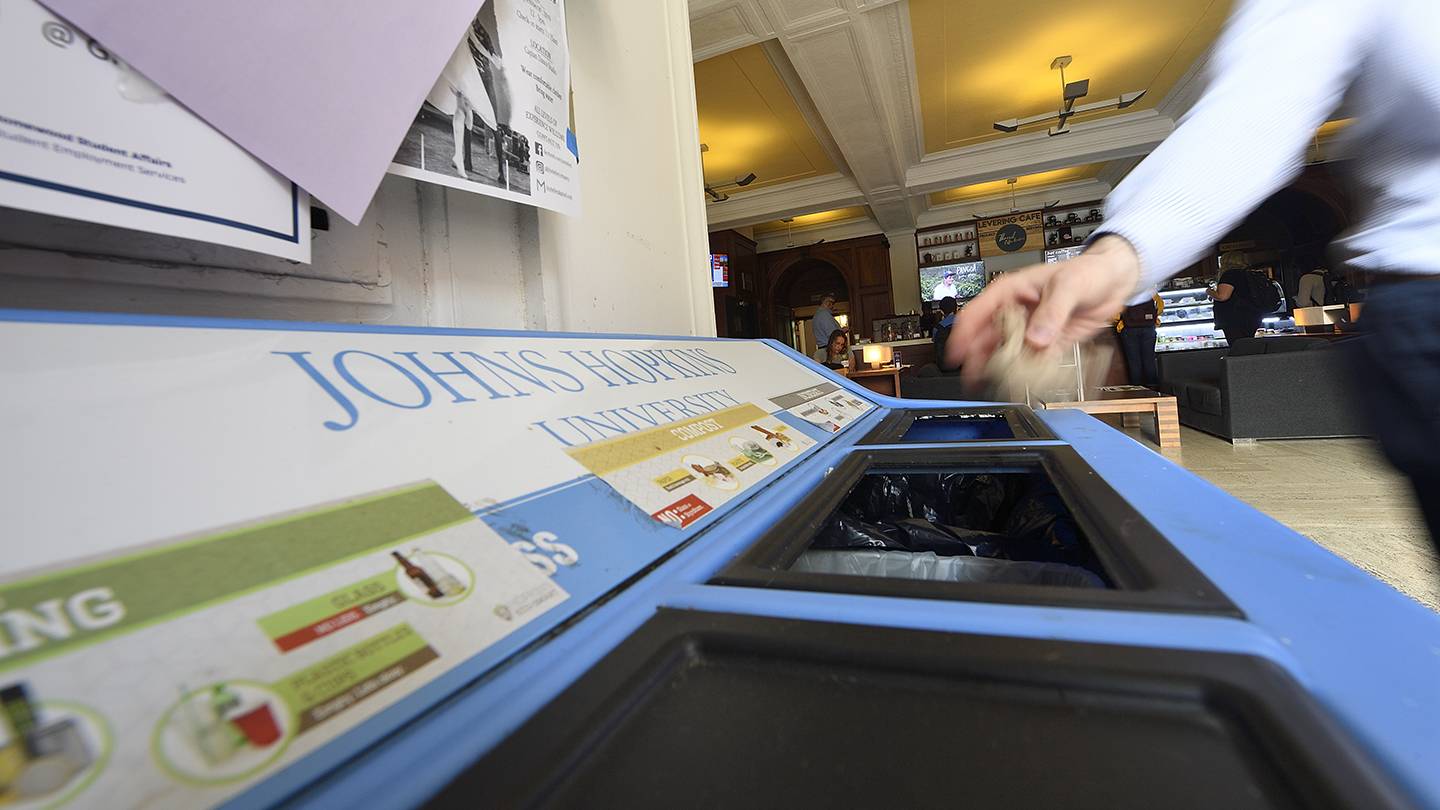 Image caption: All dining halls and academic and residential buildings now contain compost bins, and over the past decade, the university has reduced the amount of waste heading to incinerators by 22% through recycling, reuse, and compost programs.

A growing number of students are looking for ways to get involved in environmental issues at Hopkins, says Jessica Bast, the university's sustainability outreach coordinator. There are at least eight sustainability-focused groups on the Homewood and East Baltimore campuses. One group, Take Back the Tap, encourages students to eschew disposable water bottles. Another, Real Food Hopkins, advocates for more locally grown and ethically sourced food to be served on campus. First-year students can also participate in a sustainability pre-orientation program, she says.

On an institutional level, the university has taken ambitious steps to decrease its carbon footprint, says McLean, who oversees all of Hopkins' facilities. JHU reduced the amount of waste heading to incinerators by 22% over the past decade through programs that promote recycling, reuse, and compost. All dining halls and academic and residential buildings now contain compost bins. Event planners have the option to follow a zero waste plan by using compostable utensils and plates. Members of the campus community can sign up to receive alerts when free food is left over from special events. And during spring moveout—traditionally a time when many items wind up in garbage bins—volunteers bring furniture, clothes, food, and cosmetics to nonprofits and homeless shelters.

Moreover, Hopkins has constructed three co-generation plants that produce both energy and heat. The heat created by the production of electricity is used to warm water, which in turn heats buildings across campus. Co-generation is about 40% more efficient than traditional energy sources, and the plants prevent about 15,000 metric tons of carbon dioxide from entering the atmosphere each year, McLean says. 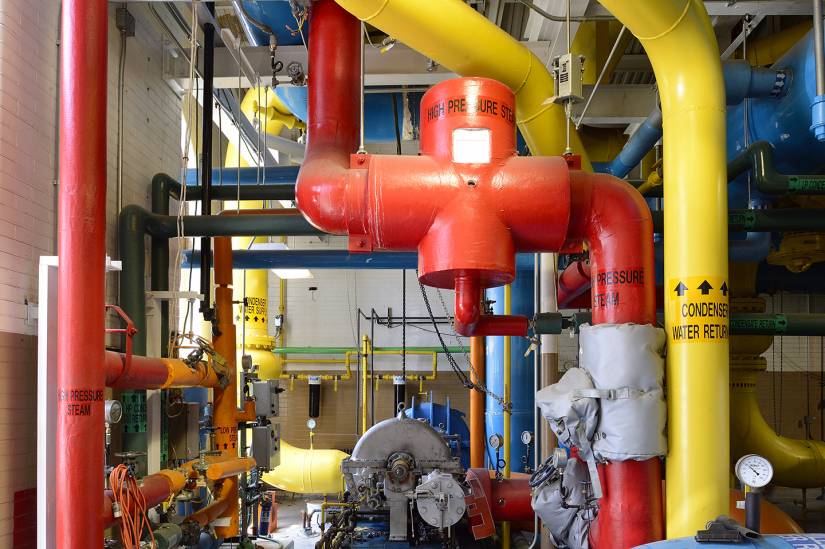 His team is also installing high-capacity chillers on both the Homewood and East Baltimore campuses. These produce very cold water that is piped to several different buildings as part of a cooling system—eliminating the need for separate air conditioning units for each building. And, most notably, Hopkins has agreed to purchase a significant portion of its energy from a new solar plant that will start generating power in 2021—the largest renewable energy purchase made to date by a single higher education institution, McLean says.

"A lot has changed since 2009," says Winch, who was part of the team that drew up those recommendations. "There are a lot of things we left out of that plan."

Alex Walinskas, a senior environmental studies major, believes one area in which the university can improve is around food sustainability. A member of Students for Environmental Action and a former Sustainability Office intern, she has helped plan a Just Food picnic that educated students on choosing local and ethically grown foods. Walinskas says she believes the Sustainability Leadership Council will challenge Hopkins to significantly lessen its carbon footprint in the decades to come.

"There's already so many exciting things happening at Hopkins, the composting bins, all the student activism," she says. "This is just another way we can drive the conversation forward."