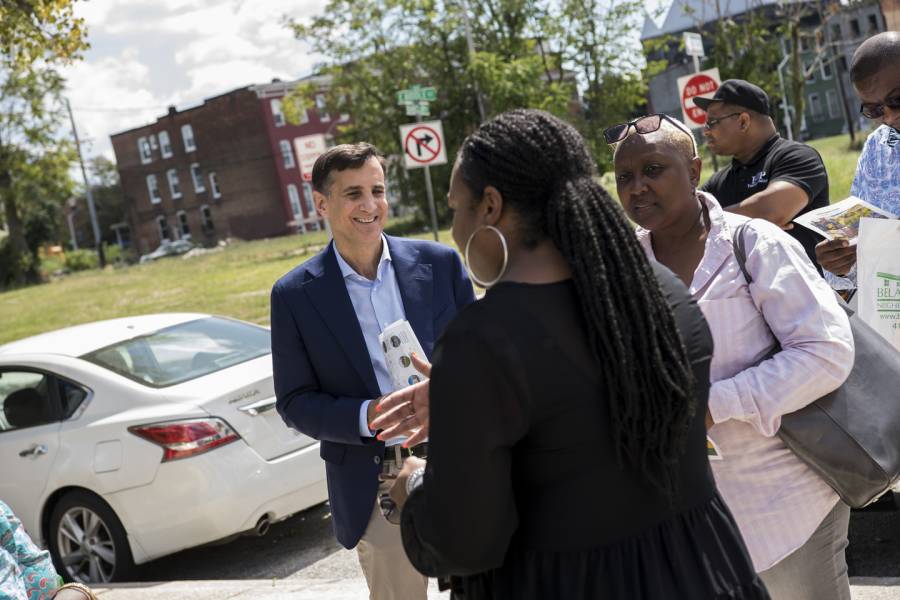 Community celebration marks the growth of the Live Near Your Work program, which over the past decade has put more than 1,100 Johns Hopkins employees on the path to homeownership in the city

A few years ago, a group of community leaders in Johnston Square formed a new neighborhood association to advocate for improvements in their Baltimore community. Their first meeting was attended by more than 100 people.

Today, the neighborhood—located in the center of the city, just east of Mount Vernon and south of Green Mount Cemetery—is seeing unprecedented investment in the form of new homes and recreation spaces. The community is also addressing blight by tearing down vacant buildings.

She spoke Sept. 7 at an event held in Johnston Square Park, a hill at the heart of the neighborhood overlooking downtown Baltimore. The event formally announced the expansion of Johns Hopkins' Live Near Your Work program, which offers grants to help Johns Hopkins employees become homeowners in Baltimore, into six additional neighborhoods in East Baltimore.

Since it launched at Johns Hopkins a decade ago, the program—a long-running partnership between local employers and Baltimore City's Office of Homeownership—has awarded more than $8.2 million in grants, with employees receiving matching funds from the city. More than 1,100 Johns Hopkins employees have been set on the path to homeownership in Baltimore City, and close to 90% of the participants have been first-time homebuyers.

"Thinking of how to strengthen the program, we heard the resounding call from our employees and our city and community to further expand its reach," JHU President Ronald J. Daniels said at Saturday's gathering, adding that many Hopkins staffers already live in these neighborhoods as renters. "We want them to become homeowners."

In addition to Johnston Square, the program has expanded to include the neighborhoods of Darley Park, Belair-Edison, Coldstream-Homestead-Montebello (CHUM), South Clifton Park, and Mayfield. Eligible employees of the university and health system can use $5,000 grants toward down payments and closing costs when purchasing a new home in these communities. In some areas, employees can receive grants of up to $17,000.

Mark Washington, executive director of the Coldstream Homestead Montebello Community Corp., called Live Near Your Work "an imperative tool ... to move these communities in a positive direction.

"For us," he added, "this is the beginning of change that was a long time coming."

After the event, attendees embarked on van tours of Johnston Square organized by community leaders in partnership with Baltimoreans United in Leadership Development, or BUILD. They explored recently rehabbed homes and visited neighborhood businesses, parks, and schools.

"When we talk about homeownership, that's one of the strongest things that you can leave our babies," Maryland state Sen. Cory McCray said. "I salute each and every one of you for being here today to lift up homeownership."

Baltimore Mayor Jack Young thanked Johns Hopkins for its "commitment of resources to promote homeownership" and for supporting "residents and future residents" of the city. He also praised the work of East Baltimore neighborhood leaders and community associations. "They have really transformed this community," he said.

The event also featured remarks from City Councilman Robert Stokes and community leaders, who manned booths at the event and chatted with prospective homebuyers. Other attendees included Maryland Del. Stephanie Smith and City Councilwomen Mary Pat Clarke and Shannon Sneed, all of whom represent communities in the Johns Hopkins expanded LNYW area.

Janelle Cousins, from the Mayfield Improvement Association, said many Hopkins employees—nurses, doctors, and student researchers—already live in her neighborhood, which is listed on the National Register of Historic Places. Rita Crews, president of the Bel-Air Edison Community Association, said she moved into the East Baltimore neighborhood three decades ago to send her child to a quality school, Bel-Air Edison Elementary.

"We have fantastic neighbors," Crews said. "Everyone's always willing to help everyone."

City Council President Brandon Scott praised the program's success and thanked Johns Hopkins leaders "for recognizing that the true path to rebuilding Baltimore is helping people make the biggest investment [they] can make—buying a house." 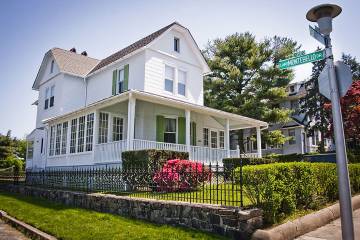 Published Sept 4, 2019
Seven neighborhoods have been added to Johns Hopkins' Live Near Your Work grant program