He led the school through period of significant growth, change in his seven years as dean

Bernard T. Ferrari will hold the distinguished title of dean emeritus following his retirement later this month after seven years as dean of the Johns Hopkins Carey Business School. 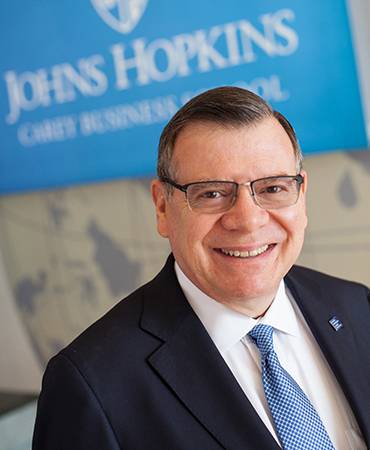 The distinction was approved by the university's board of trustees and announced by JHU Provost Sunil Kumar at a farewell reception for Ferrari earlier this month.

Ferrari, Carey's second dean, has led the school through a period of tremendous growth and change since assuming the role in 2012. Under his leadership, Carey's full-time enrollment grew by more than 400%, the number of full-time faculty members increased from 39 to more than 100, and programming significantly expanded for both in-person and online students. The school now has more than 2,300 full- and part-time students representing more than 60 countries.

In 2017, 10 years after it first opened, the Carey Business School earned accreditation from the Association to Advance Collegiate Schools of Business, the leading authority on quality assurance for business school programs.

Ferrari, who joined Johns Hopkins after a distinguished career in medicine and consulting, announced in December that he planned to retire at the end of the 2018–19 academic year. His last day is June 30.

"Bernie has been an outstanding leader for Carey during a pivotal time in the school's history," said Kumar. "I am pleased his many valuable contributions and to the Carey Business School and the university are being recognized through this prestigious honor."

Valerie Suslow, vice dean for faculty and research at the Carey Business School, will serve as interim dean until a permanent successor is in place. 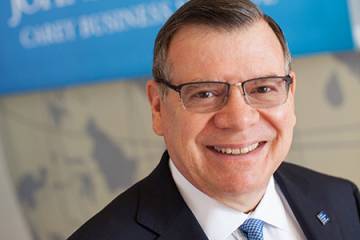 Published Dec 6, 2018
He will step down this summer after seven years leading the university's youngest school