Connor Scott, a seasoned first responder, emergency manager, and public administrator who has served as the chief of staff in the Office of the Vice President for Security for the past year, is stepping into the role of acting vice president for security for Johns Hopkins University and Johns Hopkins Medicine, effective immediately, while the university launches a national search for the position. 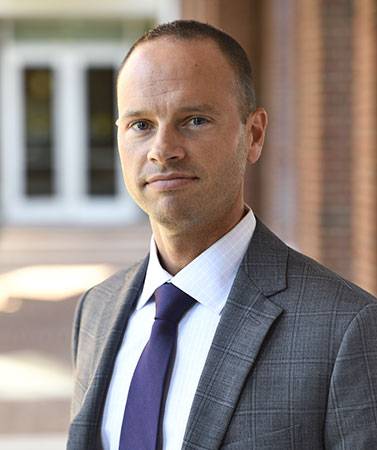 Scott will oversee security operations for Johns Hopkins Medicine hospitals and facilities in Maryland; Washington, D.C.; and Florida; and for university campus safety and security worldwide except at the Applied Physics Laboratory. The role became vacant due to the recent departure of Melissa Hyatt, who was sworn in as Baltimore County's next police chief earlier today.

In his role as chief of staff, Scott has been involved in all aspects of the day-to-day security operation at Johns Hopkins and instrumental in the development and implementation of a number of programs, processes, and initiatives, including a new student advisory committee for security, enhancement of the security officer training program, and best-practice research and policy development.

Before joining Johns Hopkins, Scott was an experienced city administrator, emergency management professional, and first responder. He served in a number of roles in Baltimore City, most recently as deputy director of operations within the Department of Transportation, where he had oversight of the agency's operational programs. He was also assistant deputy mayor for operations and deputy director of the Mayor's Office of Emergency Management.

Scott spent a decade as a firefighter and EMT in Montgomery County, Pennsylvania, near Philadelphia. He also worked as an EMT for the Temple University Hospital critical care transport team, serving patients of the Temple trauma and burn centers.

He is a Certified Emergency Manager through the International Association of Emergency Managers, holds a Masters of Public Administration from Villanova University, and has studied homeland security at Harvard University and the Naval Postgraduate School.

A committee will be convened soon to search for a full-time replacement for Hyatt, Ennis and Kasdin said.