The 21st-ranked Johns Hopkins women's lacrosse team received an at-large bid to the 28-team NCAA tournament and will face No. 18 Florida on Friday in Chapel Hill, North Carolina. The winner will advance to face third-seeded and host North Carolina on Sunday.

Hopkins was, um, pretty excited to hear its name called as the pairings were announced Sunday night.

That priceless reaction from @HopkinsLacrosse when their name is called for the @NCAA tournament. Blue Jays take on @GatorsLAX in 1st round - #GoHop pic.twitter.com/Ga6E8kikU7

The Blue Jays (10-7) and the Gators (13-6), former conference opponents in the American Lacrosse Conference, will meet for the first time since 2014.

The Blue Jays were selected despite failing to qualify for the four-team Big Ten tournament, which was played this past weekend at JHU's Homewood Field. Northwestern defeated Maryland 16-11 in the championship game, the Terps first loss of the season. Still, Maryland (18-1) received the No. 1 overall seed in the NCAA tournament for the seventh year in a row. Complete NCAA women's lacrosse tournament bracket 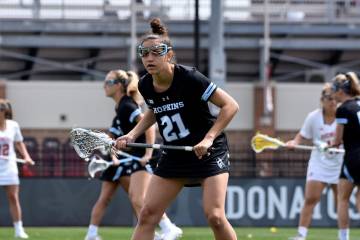