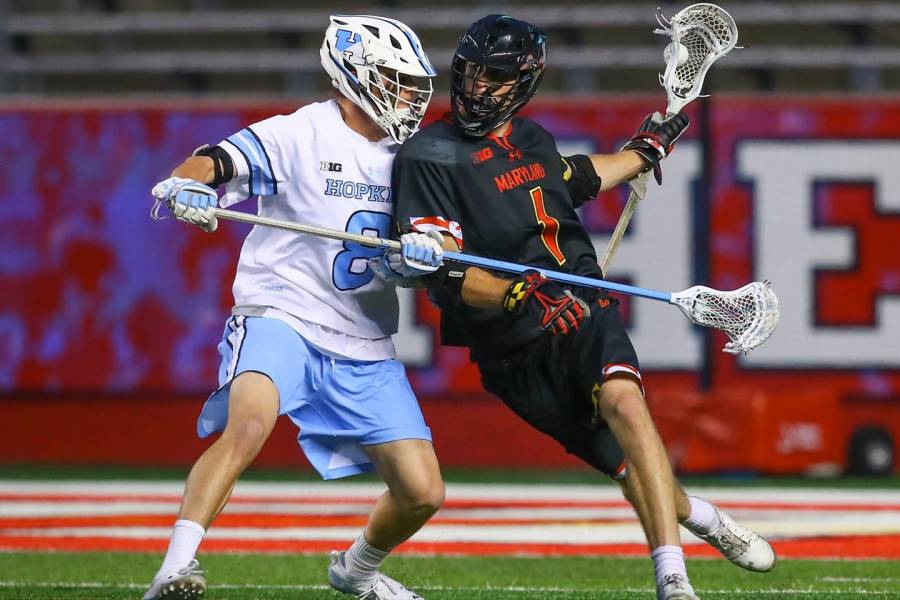 No. 15 Hopkins used a dominant second-half effort to secure a 12-7 win against the Terrapins in a Big Ten Conference tournament semifinal matchup in Piscataway, New Jersey, on Thursday night. With the win, the Blue Jays (8-6) advanced to Saturday's conference championship game to face top-seeded Penn State.

Maryland (11-4) controlled the game in the first half, taking a 6-2 lead into the break on the strength of some exceptional goaltending by Danny Dolan. Despite being outshot 20-13 in the opening 30 minutes, Dolan's nine saves help the Terps stay ahead on the scoreboard.

But the second half was all Hopkins. Maryland's defense held the Blue Jays at bay until Kyle Marr broke through with a goal with 8:31 to play in the third quarter that brought JHU within 6-3. Marr's strike ignited a five-goal, seven-minute scoring spurt that put Johns Hopkins in front for the first time, 7-6. Brett Baskin, Cole Williams, Forry Smith, and Joey Epstein all scored during the run.

Maryland got even briefly early in the fourth quarter on Jared Bernhardt's third goal of the night, but Hopkins responded with the go-ahead goal from Alex Concannon less than a minute later. A goal by Williams made it 9-7 with 9:09 to play, and Smith scored with 3:45 left to push the lead to 10-7. The Blue Jays added two empty-net goals in the final two minutes to close out the scoring.

The win came on the heels of JHU's 16-11 win against the Terps in College Park, Maryland, on Saturday night, a game in which Hopkins once trailed 5-1.

Epstein and Williams each had three goals and two assists for Hopkins, and Smith and Concannon added two goals apiece. Goalkeeper Ryan Darby made eight saves, including five in the second half. Complete box score

The Blue Jays owned a 16-6 advantage in shots on goal in the final two quarters and outshot the Terrapins 44-28 overall. JHU also won 32 ground balls compared to 25 for Maryland and committed just eight turnovers vs. 18 for the Terps.

The win gives a significant lift to JHU's postseason resume and propelled the Blue Jays to the Big Ten tournament final for the third time in five years. Hopkins won the Big Ten title in its two previous championship game appearances—in 2015, the league's inaugural tournament, and last year, when JHU topped Maryland 13-10 in the title game.

This year's final will pit Hopkins against the nation's No. 1 team, Penn State (13-1), which rolled to an 18-6 win against host Rutgers in Thursday's first semifinal. Faceoff is set for 7 p.m. Saturday, and the game will be televised by the Big Ten Network. The Nittany Lions defeated the Blue Jays 20-9 on April 21 in a game played in University Park, Pennsylvania.