In the weeks following the birth of her daughter Soleil in January 2017, Shalon Irving didn't feel right.

There were red flags. First, a painful, tender lump formed along her C-section incision, requiring lancing and draining. Then came alarming spikes in her blood pressure. A nurse who made visits to Irving's Atlanta home to treat her incision every other day recorded a dangerously high blood pressure of 174 over 118. The new mother suffered chronic pain, persistent headaches, and swelling in her legs.

She had had a complicated journey to pregnancy, with several years of fertility difficulties, a blood-clotting disorder, and surgery to treat uterine fibroids. Her health history, coupled with the known risks of postpartum hypertension and peripartum heart failure among black mothers, indicated Irving might require close monitoring and follow-up care after giving birth. 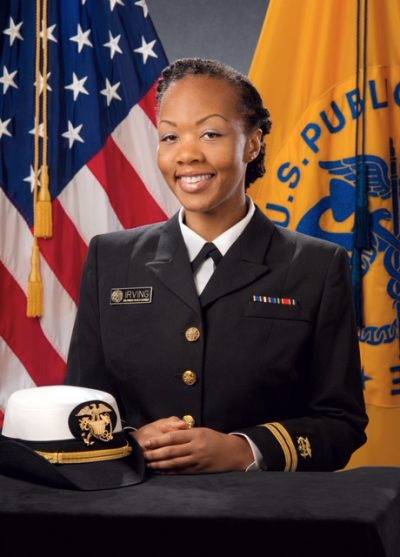 But when her Jan. 19 screening for postpartum pre-eclampsia came back negative, Irving's doctor sent her home without treatment. Five days later, she visited her physician again, this time reporting an unwell feeling and dramatic swelling in her right leg. She had gained nine pounds in 10 days. She was given a prescription to treat hypertension, and again she was sent home.

That night, Irving collapsed in her home from cardiac arrest and was rushed to the hospital, where she was removed from life support a week later. An independent autopsy her mother ordered showed that Irving had died from complications of high blood pressure.

"There's no manual for overcoming the death of a child, especially when you know that her death could have been prevented if her complaints had been heard," her mother, Wanda Irving, said during a symposium held at the Johns Hopkins Bloomberg School of Public Health on Monday afternoon.

Part public health summit and part memorial tribute to Irving, who was a Johns Hopkins alum and public health official, the symposium, titled The Fierce Urgency of Now, explored the growing crisis of health disparities for African-American mothers and how deaths like Irving's can be prevented.

The Centers for Disease Control and Prevention report that black mothers in the U.S. are 243 percent more likely than white mothers to die from pregnancy or childbirth-related causes. The World Health Organization found that black mothers die in the U.S. at the same rate as women in developing countries like Mexico and Uzbekistan.

"In every other industrialized country, maternal mortality is decreasing, while it is increasing in the U.S." said Janine Austin Clayton, director of the National Institutes of Health Office of Research on Women's Health, who spoke at the symposium. "We need change now."

Added Lisa Cooper, a Bloomberg Distinguished Professor and expert in health equity at Johns Hopkins: "Most health disparities are avoidable. They result from decisions we make as a society regarding how we allocate our resources and how much injustice we are willing to accept as a fact of life."

"Most health disparities are avoidable. They result from decisions we make as a society regarding how we allocate our resources and how much injustice we are willing to accept as a fact of life."
Lisa Cooper
Johns Hopkins health equity expert

Speakers at the symposium attributed the difference in maternal mortality among black mothers to systemic racism and bias in the health system. Several speakers noted that black women in the U.S., regardless of education or socioeconomic status, are affected by a rising mortality rate.

U.S. Rep. Lauren Underwood of Illinois, a Hopkins alum who graduated with Irving in 2009, pointed out that Irving illustrates that trend: despite holding a doctorate and two master's degrees, despite working as a lieutenant commander in the Commissioned Corps of the U.S. Public Health Service, and despite her training in health care, Irving died from the very forces she worked to correct.

Speakers discussed ways of addressing the problem through legislation, research, and a more empathetic approach to health care. Mia Keeys, health policy advisor to Rep. Robin L. Kelly of Illinois, said that next month the congresswoman plans to introduce legislation that expands the length of time mothers qualify for Medicaid after giving birth and standardizes CDC reporting on maternal mortality rates.

Joia Crear-Perry, founder and president of the National Birth Equity Collaborative, said her nonprofit is partnering with the Robert Wood Johnson Foundation and the American College of Obstetricians and Gynecologists to investigate ways of improving the quality of care for black mothers. A panel discussion celebrated the work of three Baltimore-area maternal and fetal health organizations: B'More for Healthy Babies, the Baltimore Community Doula program, and Baltimore Healthy Start.

Throughout the event, Irving's friends and former colleagues praised her brilliance, her vitality, her sense of justice, and her legacy.

When at last her mother Wanda Irving rose to speak, she described the heartbreak of knowing that her daughter had died because her pain hadn't been taken seriously by her health care provider. With her granddaughter Soleil in attendance, Wanda Irving urged the health practitioners in the audience to take heed.

"Behind every maternal mortality statistic, there is a woman who is loved, a woman who will be immensely mourned, and who will be forever missed by the families left devastated in the aftermath," she said. "There will never be another Shalon; just ask anyone who knew her."