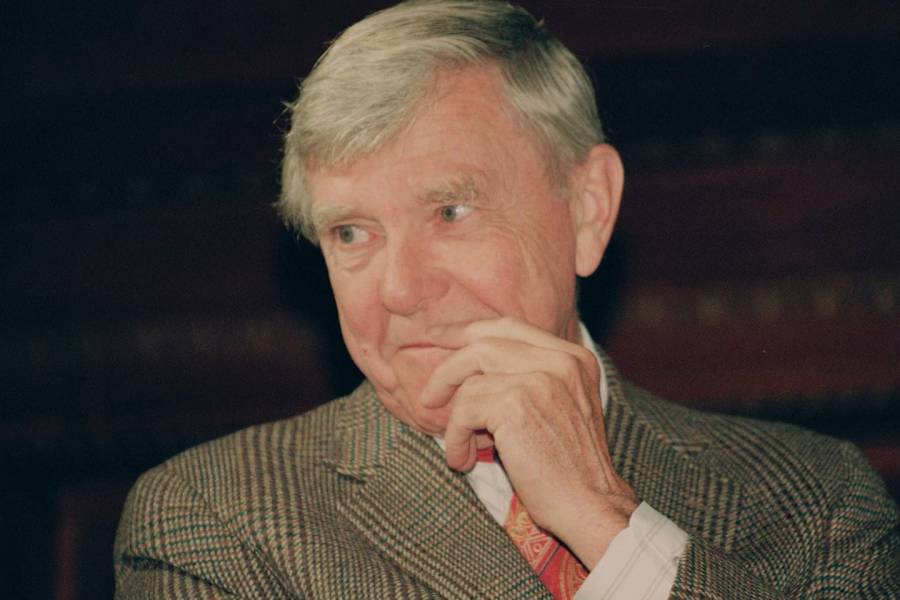 Johns Hopkins alum Russell Baker, a two-time Pulitzer Prize winner and longtime columnist for The New York Times, died at his home in Leesburg, Virginia, on Monday. He was 93.

A celebrated essayist, journalist, and biographer, Baker wrote the nationally syndicated column Observer for the Times from 1962 until 1998. During its 36-year run, the column appeared nearly 5,000 times and exceeded 3.7 million words. He was awarded the Pulitzer Prize for commentary in 1979 and a second Pulitzer in 1982 for his autobiography, Growing Up.

Born in Virginia in 1925, he moved with his mother and sister to Baltimore in the 1930s. He earned an academic scholarship to Johns Hopkins in 1942.

Baker was known for his signature whimsical style of writing marked by "an owlish wit" and a literary bent.

He briefly left the university to serve as a Navy pilot from 1943 to 1945. He returned to Johns Hopkins in January 1946, when he joined a continuing education course in writing taught by Elliott Coleman, who would later create the university's Writing Seminars.

"Elliott made no attempt to teach, but you would write, and then you would read your story or he would read some of it, then people would tear it up," Baker recalled during a 1999 interview with Mame Warren as part of the university's Oral Histories retrospective. "I learned a lot from having my stuff torn up."

Like the other young men enrolled in the course, Baker was a devotee of Ernest Hemingway and drew heavily from his narrative style. The prevalence of the Hemingway voice—staccato sentences, a heavy emphasis on the weariness of war—caused Coleman to issue a rare edict for the class: Hemingway is swell, but he's out.

"It was like a thunderclap. Hemingway is out?" Baker said.

Soon after, Coleman arranged for the class to begin studying some of the modern masters: T.S. Eliot, James Joyce, and Marcel Proust.

While at Hopkins, Baker worked as a reporter for The News-Letter. He completed his degree in English in 1947 and began his career as a police reporter for The Baltimore Sun. He would go on to write for the Times covering the White House, Congress, and the U.S. State Department for eight years. He wrote his first Observer column in July 1962.

Over time, Baker developed his signature whimsical style of writing—marked by "an owlish wit" and a literary bent, according to his obituary in the Times.

"Stylistically, the Observer examined the American scene with plain phrases that echoed Twain as they skewered the pompous. But his voice could be haunting. … A subversive among the sober editorial voices of the Times, Mr. Baker could be tongue-in-cheek one day and melancholy the next, then folksy, anguished, lyrical or acid," the obituary reads.

The author or editor of 17 books, Baker received the prestigious George Polk Award for career achievement in 1999. He served as the host of the PBS show Masterpiece Theatre from 1992 until 2004.

He is survived by his sons, Allen and Michael Baker; daughter, Kasia Baker; two sisters; and four granddaughters.