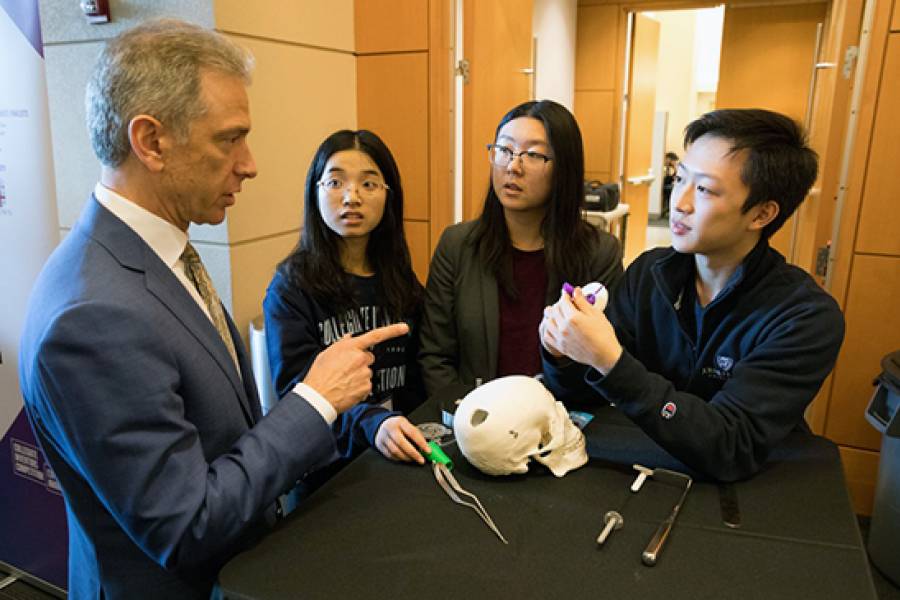 A team of Johns Hopkins University biomedical engineering students earned the silver prize Friday at the annual Collegiate Inventors Competition with a device intended to reduce the likelihood of injury during brain surgery.

Brain retractors pull back cortical tissue during surgical procedures, using metal blades to hold the tissue apart and create a working channel for surgeons. Due to their inflexible design, retractors currently cause injury in about 9 percent of operations by putting excess pressure on the brain.

Unlike current retractors, the flexible, student-designed device can gradually expand mid-procedure, increasing the area of visibility with minimal added pressure to the tissue.

Mou, Tran, and Tu represented the team during the competition, held at the United States Patent and Trademark Office Madison Building in Alexandria, Virginia. There they competed against four undergraduate teams from schools across the country, presenting their idea before a panel of judges from the National Inventors Hall of Fame and USPTO officials. The silver prize comes with a $5,000 award that is split among the team.

The project was overseen by Amir Manbachi, faculty mentor and co-instructor of the Biomedical Engineering Design Team course. Callie Deng, Rohith Bhethanabotla, and Muna Igboko also contributed to the project but have since graduated or left the team.

In development, the team consulted with Johns Hopkins professor of neurosurgery Alan Cohen and worked with neurosurgery resident Rajiv Iyer to produce and test more than 20 prototypes before settling on the final design. It took more than a year for the team to go from initial brainstorm to final product.

The silver prize follows first-place awards for the team at the Biomedical Engineering Society's Undergraduate Design Competition and at the Design by Biomedical Undergraduate Teams Challenge, sponsored by the National Institute of Health. Next, team CortiTech is hoping to apply for FDA approval to eventually get Radiex manufactured. 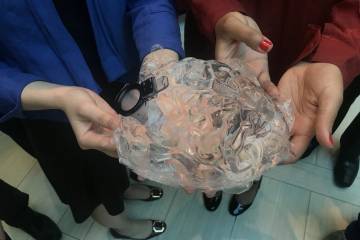 Student team develops tool for use in brain surgeries

Published Nov 15, 2018
Team's device, Radiex, holds back cortical tissue during surgery; they will present their design this week at Collegiate Inventors Competition