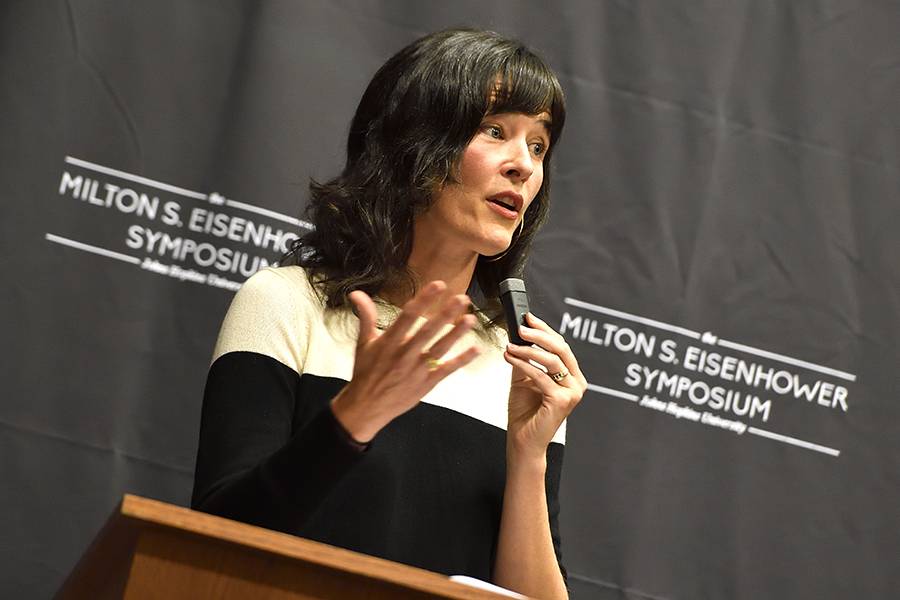 Entrenched in their investigation—which had uncovered mountains of sexual assault allegations against the Hollywood mogul—the bleary-eyed reporters questioned whether their article would actually get any notice.

"Do you think anyone's going to read this story?" Twohey remembers thinking.

The Times investigation—which won Megan Twohey and Jodi Kantor a Pulitzer Prize for public service—is now recognized as a critical spark for the worldwide reckoning on sexual assaults that's arisen over the past year.

But soon after the Times published its first article about the allegations on Oct. 5, Twohey started to get a sense of its impact. Scrolling through Facebook, she saw hundreds of heated comments from friends and readers—and her first glimpse of the #MeToo hashtag.

"It brought tears to my eyes," Twohey said during a talk at Johns Hopkins University on Wednesday that was presented by the Milton S. Eisenhower Symposium.

Today Weinstein, fired from his own company and exiled from Hollywood, faces charges for multiple allegations dating back decades. And the Times investigation—which won Twohey and Kantor a Pulitzer Prize for public service—is now recognized as a critical spark for the worldwide reckoning on sexual assaults that's arisen over the past year.

For Twohey, the rewards from her journalism career have come from witnessing these kinds of vivid, tangible results.

"It can change laws, it can send bad guys to jail, ... it can protect the vulnerable," she said last night.

Her first moment like this came at The Chicago Tribune, when her reporting on "thousands of unidentified rape kits gathering dust in vaults" led to a reform of Illinois state law, she said. Another investigation led to the arrest of a doctor accused of multiple rapes—a man who is "still in prison today," Twohey said.

Later, at Reuters, Twohey's reporting on an underground network of illegal child adoptions spurred FBI investigations and the passage of new laws in several states.

With the Weinstein story, the key was building an airtight, legally sound case based on the paper trail of secret settlements and HR complaints in the producer's past—"the equivalent of journalistic gold," Twohey said.

It was also critical for the reporters to lock down on-the-record accounts from Weinstein accusers who had previously been coerced, bribed, or threatened into silence. In starting these kinds of sensitive conversations, Twohey said, she often tells her sources: "We can't change what happened to you, but if you speak with us and we're able to publish the truth, we may be able to prevent others from being hurt."

Today, almost exactly a year after their first Weinstein story went to press, Twohey and Kantor are working on a book about their experiences with that investigation and the broader #MeToo movement in media.

It's a far cry from a prediction one Weinstein Company board member made last fall, in a personal email the reporters were able to access. Shortly after the Times story published, the board member assured Weinstein: "This will go away sooner than you think and it will be forgotten."

As Twohey said last night: "Wow, was he wrong."