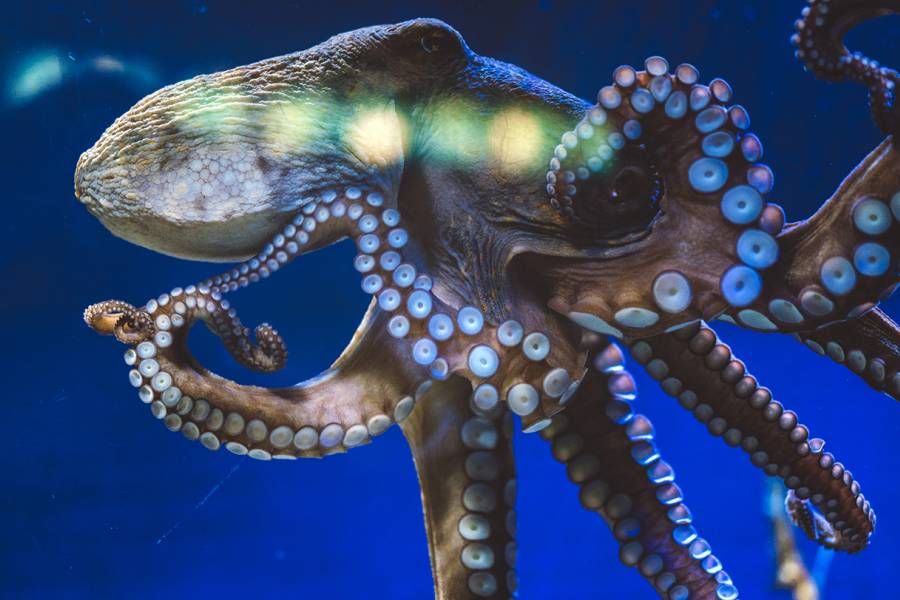 By studying the genome of a kind of octopus not known for its friendliness, then testing its behavioral reaction to the popular mood-altering drug MDMA, or ecstasy, scientists say they have found preliminary evidence of an evolutionary link between the social behaviors of the sea creature and humans, species separated by 500 million years on the evolutionary tree.

A summary of the experiments is published Thursday in Current Biology, and if the findings are validated, the researchers say, they may open opportunities for accurately studying the impact of psychiatric drug therapies in many animals distantly related to people.

"[The octopuses exposed to MDMA] tended to hug the cage and put their mouth parts on the cage. This is very similar to how humans react; they touch each other frequently."
Gül Dölen
Johns Hopkins neuroscientist

"The brains of octopuses are more similar to those of snails than humans, but our studies add to evidence that they can exhibit some of the same behaviors that we can," says Gül Dölen, assistant professor of neuroscience at the Johns Hopkins University School of Medicine and the lead investigator conducting the experiments. "What our studies suggest is that certain brain chemicals, or neurotransmitters, that send signals between neurons required for these social behaviors are evolutionarily conserved."

Octopuses, says Dölen, are well-known to be clever creatures. They can trick prey to come into their clutches, and Dölen says there is some evidence they also learn by observation and have episodic memory. The gelatinous invertebrates are also notorious for escaping from their tanks, eating other animals' food, eluding caretakers, and sneaking around.

Most octopuses are asocial animals and avoid others, including other octopuses. But because of some of their behaviors, Dölen still thought there may be a link between the genetics that guide social behavior in them and humans. One place to look was in the genomics that guide neurotransmitters, the signals that neurons pass between each other to communicate.

Dölen and Eric Edsinger, a research fellow at the Marine Biological Laboratory in Woods Hole, Massachusetts, took a closer look at the genomic sequence of Octopus bimaculoides, commonly referred to as the California two-spot octopus.

Specifically, in the gene regions that control how neurons hook neurotransmitters to their membrane, Dölen and Edsinger found that octopuses and humans had nearly identical genomic codes for the transporter that binds the neurotransmitter serotonin to the neuron's membrane. Serotonin is a well-known regulator of mood and closely linked to certain kinds of depression.

On ecstasy, octopuses reached out for a hug

Octopuses get strangely cuddly on the mood drug ecstasy

Scientists gave MDMA to octopuses—and what happened was profound

The serotonin-binding transporter is also known to be the place where the drug MDMA binds to brain cells and alters mood. So, the researchers set out to see if and/or how octopuses react to the drug, which also produces so-called pro-social behaviors in humans, mice, and other vertebrates.

Dölen designed an experiment with three connected water chambers: one empty, one with a plastic action figure under a cage, and one with a female or male laboratory-bred octopus under a cage.

Four male and female octopuses were exposed to MDMA by putting them into a beaker containing a liquefied version of the drug, which is absorbed by the octopuses through their gills. Then, they were placed in the experimental chambers for 30 minutes. All four tended to spend more time in the chamber where a male octopus was caged than the other two chambers.

"It's not just quantitatively more time, but qualitative. They tended to hug the cage and put their mouth parts on the cage," Dölen says. "This is very similar to how humans react to MDMA; they touch each other frequently."

Dölen says the experiments suggest that the brain circuits guiding social behavior in octopuses are present in normal conditions, but may be suppressed by natural or other circumstances.

"Octopuses will suspend their antisocial behavior for mating, for example. Then, when they are done mating, they go into aggressive, asocial mode," says Dolen.

Dölen cautions the results are preliminary and need to be replicated and affirmed in further experiments before octopuses might be used as models for brain research.