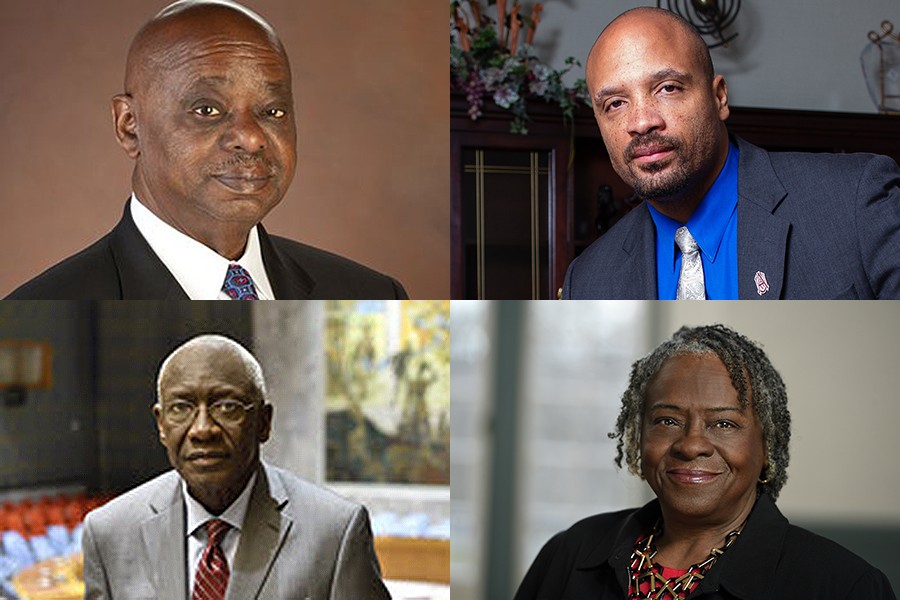 In the early summer of 1865, Gen. Gordon Granger arrived at Galveston Island, Texas, with 2,000 federal soldiers and prepared to change the course of history. It had been more than two years since President Abraham Lincoln had issued the Emancipation Proclamation, and yet hundreds of thousands of people remained enslaved.

On June 19, from the wrought-iron balcony of an ornate red brick villa called Ashton, Granger read aloud "General Order No. 3" proclaiming the total emancipation of all slaves held in Texas. That day, known as Juneteenth, is recognized as a state holiday or special day of observance in 45 states and is the oldest known commemoration of the ending of slavery in the U.S.

On Friday, as part of the Johns Hopkins Black Faculty and Staff Association's Juneteenth celebration, four new members will be inducted into the Indispensable Role of Blacks at JHU exhibit, a traveling and online exhibit honoring the indelible mark people of color have made on Johns Hopkins.

"I am humbled and honored to be inducted into the Indispensable Role of Blacks at JHU exhibit, especially among this group of inductees," says Lynnise Norris, president of the BFSA who is among those who will be inducted into the exhibit this year. "I'm proud of the work I've done to help mentor young people of color who enter careers in finance at Hopkins, especially young black men who are underrepresented in the finance field at Hopkins. But I'm even more proud of those individuals I've worked with who have gone on to lead and mentor others. It's part of a chain reaction of support and leadership, and that's what the BFSA has worked so hard to achieve."

The Juneteenth celebration will be held in the Glass Pavilion of Levering Hall on the Homewood campus from 5:30 to 8 p.m., with the induction ceremony taking place in the Sherwood Room at 4 p.m. The program will include Baltimore City Councilman and Maryland gubernatorial candidate Brandon Scott as the keynote speaker, as well as a gospel choir, a storyteller, and supervised activities for children.

The individuals selected to join the Indispensable Role of Blacks at JHU exhibit hail from the current and past Hopkins community. They are:

In 1958, the year he received his bachelor's degree from Johns Hopkins University, Ernest Bates had no idea how strong—or how instrumental—his connection to his alma mater would be. After receiving his undergraduate degree, Bates, the first African-American to graduate from the Zanvyl Krieger School of Arts and Sciences, went on to earn his medical degree from the University of Rochester School of Medicine in 1962 and became board certified in neurological surgery in 1973. He founded American Shared Hospital Services, a publicly traded health care company that leases state-of-the-art medical equipment to hospitals in the United States and abroad. He is a member of several professional medical societies, an emeritus member of the University of Rochester's Board of Trustees, and served as a member of the Board of Governors of California Community Colleges and the Professional Advisory Committee at the University of California Medical Centers. He served as vice chair of the Johns Hopkins University Board of Trustees and is currently a trustee emeritus. Bates is former chair of JHU's annual fund, which honored him in with the Heritage Award in 2003.

Chance Glenn characterizes himself as a creator, a technologist, a futurist, and a visionary. Now a tenured professor and dean of the College of Engineering at Alabama A&M, Glenn received his master's and doctoral degrees in electrical engineering from Johns Hopkins. He began his career at the Army Research Laboratory in Maryland, where he designed microwave and radio frequency devices for a range of defense-related applications. At the lab, he also became involved in signal processing and the study of non-linear dynamical systems. He left the lab to co-start an engineering company. In 2003, Glenn joined the faculty at the Rochester Institute of Technology, where he was later named associate dean of graduate studies. He was named dean of Alabama A&M's College of Engineering, Technology and Physical Sciences in 2012. He has several patents to his name and is also a Grammy-nominated singer/songwriter.

An accounting supervisor in the university's finance division, Lynnise Norris enjoys tracking government funding used in research and education at Johns Hopkins. When she's not crunching numbers, Norris dreams up ways to help support people of color who study, teach, and work at Johns Hopkins University. Elected in 2017 to serve a two-year term as president of BFSA, she has worked to improve the black experience at Johns Hopkins and the experiences of others from different ethnic, cultural, and religious backgrounds. She implemented the Finance Diversity Mentor Program, a 10-month initiative designed to connect employees in finance roles throughout the university with senior leaders who serve as mentors. Norris earned a bachelor of science degree in accounting from the University of Baltimore, a master's degree in science marketing from JHU's Carey Business School, and a post-graduate certificate from the Carey School. She is a lifelong Baltimore resident.

Lamin J. Sise's life and career can be summed up in six words—well-educated, well-traveled, and well-liked. A native of The Gambia in West Africa, Sise transferred to Johns Hopkins from Howard University because he said he wanted a more challenging academic environment. While a student at Homewood, Sise was invited to dine at the Baltimore home of former JHU President Milton S. Eisenhower, who was said to be so impressed with the student that he arranged to give Sise—who had arrived in the U.S. with pennies in his pocket and worked several jobs to pay his academic bills—a generous financial aid package as long as Sise kept a strong GPA. Sise received his undergraduate, graduate, and doctorate degrees from Johns Hopkins and went on to receive his LLB degree from the University of Cambridge. He was employed by the United Nations for three decades, serving in Geneva, Switzerland, and New York and working in more than 100 countries. "Imagine me, a poor African boy who has met with dozens of heads of states and every president from Gerald Ford to Barack Obama," Sise said. "I would not have been able to do these things in my career without Johns Hopkins."