For someone who loves to dodge the camera, Kimberly Wong certainly found herself in the spotlight last month. 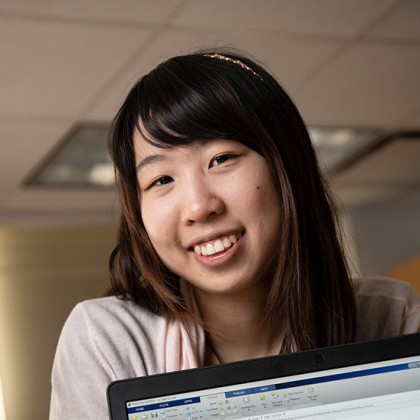 Since publishing a recent research study she led about the peculiarities of the letter "g," she's been congratulated by people she barely knows, approached by classmates who want to discuss it with her, and watched as friends and family shared links to news articles about it online. She's fielded requests from reporters and now knows her way around an interview backwards and forwards.

"It's been really overwhelming," said Wong, who adds that she is happy to have made her parents proud.

A junior studying cognitive science at Johns Hopkins, she had to juggle more than classes last month. Her work has been featured in major media outlets like The Atlantic, TIME, and HuffPost. People around the world have read about Wong's research in Dutch, Russian, Chinese, Croatian, Spanish, and Italian. Most have been surprised at their inability to recognize the lowercase, looptail "g."

For a letter of the alphabet you will see multiple times in this article, it shouldn't be such a hard task to identify the character in a lineup. Wong and her co-authors on the paper—Michael McCloskey, a professor in the Department of Cognitive Science, and Gali Ellenblum, a graduate student in McCloskey's lab—are astounded at the interest the research has piqued.

McCloskey has had undergrads in his lab before, but Wong is the first to be the lead author on a paper.

"Kim's work is extraordinary, and I am very lucky to have her working in my lab," he said.

Added Ellenblum: "Kim is still my research assistant, and I would trust her with assignments that I don't trust anyone else with."

For Wong, working in McCloskey's lab has shaped her interests and set her solidly on the path to academia.

Though she was an avid participant in the Science Olympiad from fourth grade until college, Wong came to Hopkins without a declared major. While exploring all that was offered to her, she walked into McCloskey's Introduction to Cognitive Neuropsychology class.

Almost nobody can write this letter of the alphabet correctly

The ‘g’ in Google’s old logo is really weird

"I wanted to find a topic that I could fall in love with—something that I could go deep into and really be able to teach the next generation," Wong said.

The intangible yet blatant nature of cognitive neuroscience has intrigued Wong.

"It's like things you deal with a lot of the time, but that we often take for granted," she said.

The "g" research is part of the group's larger writing project wherein they are mapping the unspoken "rules" that govern the way a person writes. For example, she questioned the way people write the capital A letter. You can either start from the top, at the very tip of the triangle, or you can start at the lower left corner. Why not the bottom right?

"We are basically mapping why people write the way they do, because there's so many different ways to write a single letter," said Wong.

While she evidently has a soft spot for orthography, she is applying for a cognitive science PhD program and hopes to eventually land a teaching position.

"I don't think I would have seen this major if it wasn't for Hopkins," she said.

Besides writing a winning paper, Wong has also been supervising the new undergraduate research assistants.

"I really enjoy helping them get on their feet," she said, "and hopefully in the future, they can also get a chance to dive really deep and fall in love with the topic like I have." 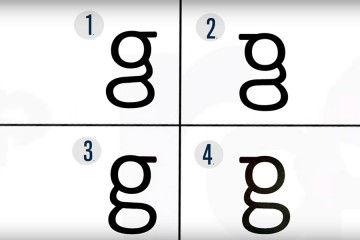 Which is a real letter?

Published April 3, 2018 Video
Most people are unaware of the two versions of g, a finding researchers say suggests the important role writing plays in learning letters